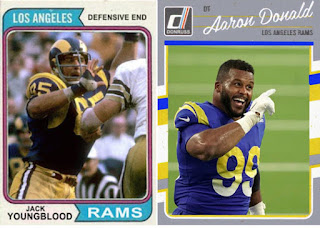 Last night the Rams beat the New England beat the Patriots 24-3 and we couldn't help notice the strong running game that was in the pattern of the 1970s Rams teams.

It brought to mind that the 2020 Rams really are a mirror image of the Rams teams of the seventies.

The Rams are even scoring on defense as of late and now have three defensive touchdowns in the last three games.

In terms of scoring defensively, in the noted span the Rams led the NFL in pick 6s with 20 and returned five fumbles for touchdowns for a total of 25. Only Denver (26) had more. 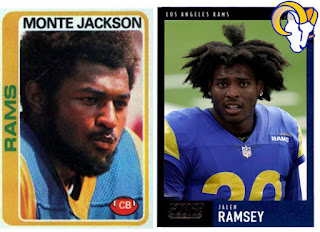 The rankings were eerily similar in rankings compared to the rest of the NFL.

Of course, we know the big names, Aaron Donald, again a contender for Defensive Player of the Year, Jalen Ramsey, a cornerback, slot corner, and last night, a linebacker in the 6-1 and the 3-4 on a few snaps. Leonard Floyd, the left linebacker. John Johnson III, a left safety in base, and a slot in dime, and sometimes a linebacker in nickel. Michael Brockers, one of the better 5-techniques in base and a good rusher inside in nickel. At Right outside linebacker/RDE-nickel, it's been by committee. Injuries and rotation have allowed five players to share that role. None have stood out, though Justin Hollins seems to be coming on, but together they have combined for 54 tackles and 8.5 sacks. That's decent production for the edge opposite Floyd who has 43 tackles and 7.5 sacks himself.

The stars in the seventies were Hall of Famer Jack Youngblood, late-70s Nolan Cromwell, Merlin Olsen from 74-76 in our time-frame, Monte Jackson a star in the middle part of our span. Solid, good tackling safeties. Larry Brooks a great player who is seriously underrated. All-Pro linebacker Isiah Robertson and Hacksaw Reynolds. Flashy right end Fred Dryer also was a big contributor.

On offense in 2020, they are 17th in points per game, sixth in total yards, 12th in passing yards, eighth in rushing yards, 18th in interception percentage, sixth in sack percentage allowed and Jared Goff is 22nd in passer rating. The numbers range from sixth to 22nd. Middle of the pack to good, we'd say.

Those numbers are akin to the Rams offenses of the 70s, except the 1970s Rams would rank high in rushing yardage in almost every year of their playoff run and the old team scored more, due to that running game.

It is fair to say both have/had good offenses, but not great ones. The 2017 Rams offense was excellent but since the 2018 Kansas City game the Rams offense has regressed too often, though in plenty of games they have been great, but there have been some stinkers, too. 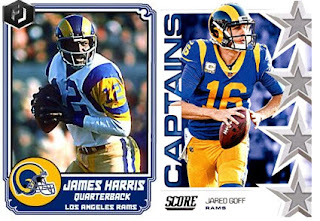 That pattern existed for the Rams back in the day as well. John Hadl started on fire in 1973 the slump to the point he was traded to the Packers the next season. James Harris took over, even had a perfect passer rating in his first start. He had an 81.5 passer rating from 1974-76, which was decent for that era. He was a good winning percentage, but he could have some bad games, too, usually in the playoffs.

Pat Haden, same deal. Vince Ferragamo got them to the Super Bowl in 1979 and had the rams in the game but a pick by Jack Lambert sealed the Rams fate in that one. Then, in 1980, he had a big year passing, which was unlike the Rams back then, but he had a couple of stinkers, too. He reminds us most of Goff. He was the girl with the curl When he's good he was very good. When he's bad, he's veery bad.

Through all of that, the Rams had good runners, some Pro Bowl receivers in Harold Jackson and Ron Jessie (like Cooper Kupp and Robert Woods). Skill position-wise overall, though, we'd give the edge to the current Rams. The O-line edge would go the past Rams cumulative team. So that comes out in the wash.

In the third aspect of the game, special teams, it is also interesting. Those who were around in the 70s know that the special teams let the Rams down in the playoffs almost every year. Blocked punts, kicks, never a big play in the return games, missed PATs, missed field goals.

In the regular season, it was a better story but not one of greatness, either. Aside from Cullen Bryant returning three kicks for touchdowns it was not great special teams for LA, though there were some special things at times.

David Ray and Tom Dempsey, Raphael Septien, and Frank Corral combined to miss 31 PATs in that time, the most in the NFL. Sound like the 2020 Rams PAT fiasco? Their field goal averages were okay in the 70s but not tremendous—12th in the NFL. Give them a B or B- on field goal prowess.

Frank Corral was an All-Pro kicker in 1978 mostly for his late game-saving kicks (three) that really saved the Rams 1978 season so there is, again, a kind of an edge for the old school Rams. Another edge was Nolan Cromwell's ability to execute fake field goals. That was a weapon that gives the 70s Rams, we'd have to say and edge over now, though as mentioned and will now address, they had flaws.

In 1977 and 1978, the coverage units were good other years okay. And another thing the Rams special teams did well is block some kicks and punts, especially in the late-1970s when Ivory Sully, Pat Thomas, and Nolan Cromwell joined the team. So the special teams in coverage had an edge.

In 2020 the kicking game is the worst since 1974-76. They are upside down in kick and punt returns giving up far more yards that they gain. They do have a great punter, but the coverage teams have let him down time and again. It's just the type of thing that cost the Rams against Dallas and Minnesota in the 70s.

So, the teams not a 100% match, nothing is. But they are close. Not mirror images buy certainly and echo. For 2020 rams fans the special teams have to be scary much like the playoff special teams for the Rams of, say, 1973-76.

Could this be a 2020 team that wins the division with an 11-5 or 12-4 team and then loses in the NFC Championship game and thus history repeats?