Does Aaron Jones have a future in real estate?

The Packers’ dynamic running back found the end zone four times in Green Bay’s 35-17 victory over Detroit. He repeatedly closed the sale in one or the other of the two most sought-after plots of land at Lambeau Field.

Used sparingly (7 touches) in the opener against the Saints, Jones’ workload (23 touches) increased against the Lions. He rushed for 67 yards on 17 carries and caught six passes for another 48.

But it was his four scores that mattered most. The Green and Gold went 4-for-4 in the red zone thanks to Jones who capped drives with three touchdown receptions and one on the ground.

In grabbing four, Jones became only the second player (Sterling Sharpe, 1994) in Packers history to score a touchdown in all four quarters of a single game.

Jones’ tied other records as well. He, Johnny Blood and Andy Uram are the only backs in team annals to have caught three TD passes in one game. He, Paul Hornung (2), Jim Taylor (3) and Sharpe (2) are the only Packers to have scored four TDs more than once.

(Jones rushed for four touchdowns in Dallas in 2019.) 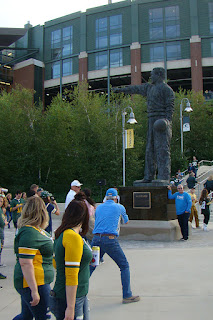 Jones has been a producer of points since being selected out of the University of Texas at El Paso in the fifth round of the 2017 NFL Draft. Has scored at least one TD in 31 of the 56 regular-season games in which he has played, and Green Bay has gone 23-8 (.742) in those contests.

Moreover, he has amassed his haul at a lightning-quick pace. Only Taylor (51) and Ahman Green (47) had as many or more TDs in their first 56 regular-season games as Packers.

Jones was the Green and Gold’s not-so-secret weapon inside the Detroit 20-yard line. The Packers ran 13 plays there and gained 52 yards. Jones accounted for 48 on 10 touches and registered all six of the team’s first downs in the red zone.

Monday night was the second time Jones has scored multiple touchdowns on pass receptions in a game. He had two in a 31-24 win in Kansas City in 2019.

Historically, the Packers have done well when one of their backs catches two or more TD passes. Starting with Marty Norton in 1925, the Green and Gold have gone 22-2 (.917) when a running back reaches the end zone at least twice through the air.