TUESDAY TIDBITS: "Get the Quarterback" 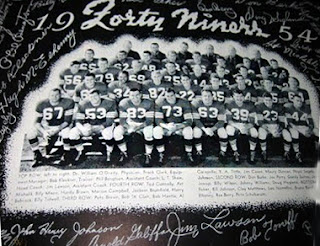 Three weeks into the books, and the 2021 season is off to a terrific start.
Watching the inept Chicago Bear offensive line attempt to pass block on Sunday leads us to the title of today's column. During the halcyon days of  '85 & '86 the Bears were known for their legendary defense, and the still powerful and productive Walter Payton-led run game.
The Bears o-line was skilled, well-coached, and played with passion—yet not much has ever been written about their pass blocking. During the 29 wins, the Bear line allowed 53 sacks, but when they faltered they allowed 14 sacks in the three losses. Since 1949 there have been many teams that have had a fearsome pass rush, and no doubt all you folks can name them.
Historically for today, we are going to return to 1954 and the opening day at Kezar for the woeful Redskins taking on a strong contending 49er team. Starting at right defensive end in the San Francisco 5-man line is undrafted rookie Jackson Brumfield.
Who?
Most fans have never heard of him, and sure wish I had even more film on him, yet when watching this youngster play you come away knowing he had a very strong future in the league. Second quarter and the Niners already have the lead and twice Clay Matthews and Brumfield combine to sack Jack Scarbath. Brumfield also recovers a fumble in the first half as San Francisco dominates play. Fourth quarter, and Scarbath is pitching that pigskin since Washington is down 34-7, and on a 2nd down and eight play from his own forty-nine-yard line Brumfield again takes down the passer.
How many rookies in their very first game record multiple sacks and recover an opponent fumble? October 24th, and the defending league champion Lions are in Kezar in what promises to be game of the week. San Francisco has won thirteen of their past seventeen games, and to a man believe this is going to be their year. The explosive Niner offense puts up 37 points, and Brumfield again records two sacks.
The injury to McElhenny derailed the division title hopes of San Francisco, but on a December Saturday afternoon in Kezar to close the season Jackson B. again records two sacks in a hard-fought 10-7 win over the Colts. Is Jackson Brumfield the first rookie to lead the league in sacks in NFL history? Sure wish I could answer that question, but just don't have enough film, and play by plays to accurately list the sack leaders that year.
RDE Brumfield closes down and tackles Marion Motley
Possibly Clay Matthews leads the league, or they may have even tied? When his teammates voted for defensive team MVP for '54 Jackson received the honor, and considering that Leo Nomellini had another All-Pro year .....very, VERY impressive.
Probably Jackson Brumfield is the only rookie in league history to have multiple sack games to open and close the season, and have a multiple sack game against the defending league champion, and he just might have had 12 sacks in a 12 game season? For his efforts, he was voted the 49ers defensive MVP.
Brumfield goes into the military for two years, and does not make the 49er team in 1957; he is literally a one-shot wonder who made his mark in the city by the bay in his only year. Since the Bears were mentioned above; will close this saga with one the most impressive rookie seasons ever for a receiver. On September 26th, 1954 the defending champion Lions open their campaign in Briggs Stadium against the Bears.
The starting left end for Chicago is Harlon Hill, and the tall, lean, long-striding speedster catches 4 passes for 140 yards. He is the ONLY rookie in league history to have a 100-yard receiving game against a defending league champion. Zeke Bratkowski starts at quarterback, and his first pass of the season is to Hill but is incomplete, but the roughing the passer penalty moves the ball to the Bear forty-five. Zeke completes a pass to Hoffman and big John rambles 54 yards to the Detroit one-yard line.
The Bears cannot punch it in, but the Blanda field goal gets them on the board first. Detroit punts, and on a second and eighteen play from his own thirty-six Bratkowski fires up the left sideline to Hill. Harlon evading the linebacker had made a very polished inside move then broke to the sideline where Zeke's on target pass was caught by the glue-fingered rookie.
Safety Carl Karilivacz dove at the ball, and missed—and away he goes for 64 yards and a touchdown on his very first catch in the pros. Second quarter and Chicago again is on their own thirty-six as Blanda(now in at QB)heaves a pass to Hill. Harlon leaps and outfights Karilivacz for the ball.....a gain of 38. Blanda comes right back to Hill for 12 yards, and eventually, Jagage piledrives into the endzone to give Chicago a 17-10 lead. ****The box score at Pro Football Reference does not list the chronological scoring correctly.
The teams are tied at 17 at the half, and Hill has three catches for 114 yards. The second half is all Lions in the 48-23 victory, but the Bear rookie has demonstrated he is going to be a force in the league. Many of you have probably seen his stats for the year, and while all that is well and good, -----watching him on film is just eye-popping amazing.
Posted by TJ Troup at 7:25 AM