By John Turney
After looking at the All-22 we noticed a few different nickel defenses, as well as dime in the Rams, win over the Bears last Sunday night 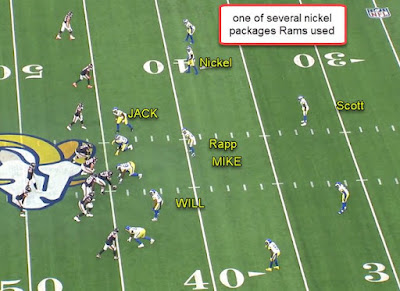 This is six DBs, two LBers, and three DLmen. Taylor Rapp is playing linebacker, and Nick Scott takes his place as the right safety (Rams use left- and right, not strong and free safeties). In this case the nickel bak is  Darious Williams with Jalen Ramsey and David Long outside. 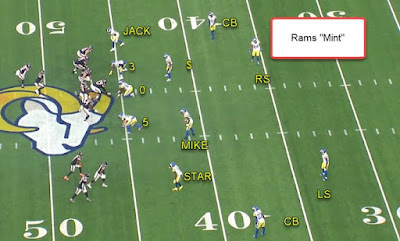 This is the Rams "mint" nickel that employs Jalen Ramsey as the nickel or "Star" and a MIKE 'backer and a moneybacker.  The "Jack" is a hybrid linebacker/defensive end, call it the "edge" player. 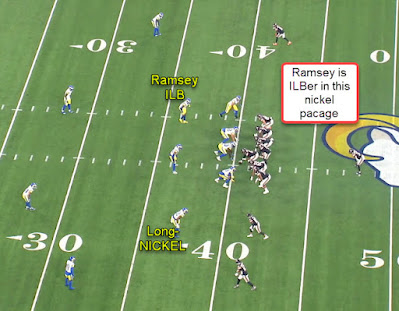 Here is a classic nickel look with Jalen Ramsey as an inside linebacker and this time David Long is the nickel corner. 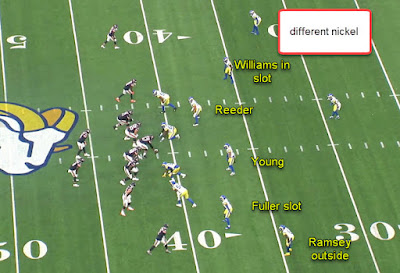 This is one of four nickel defenses we saw. Here it has Troy Reeder as the WILL with Kenny Young on the three-receiver side, making him the MIKE. This is a single-high look, which is kind of rare. Usually, the Rams show a two-high look and rotate one of the safeties down as a robber-type player. 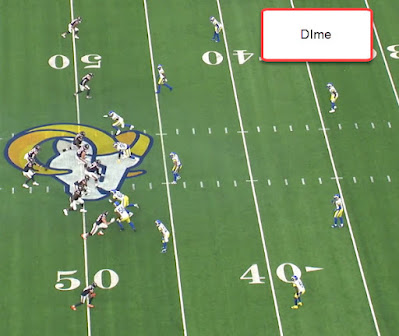 This is dime with Young as the MIKE and Rapp the near corner and Williams as the slot corner on the top side of the still.
The Rams pass defense held the Bears to 219 yards passing on 40 attempts (5.48 yards per attempt)  and a defensive passer rating of 74.6 and picked off one pass and defensed six others.
We will try and monitor any others that show up. It may not be as many different packages as Fritz Shurmur employed back in the day but it is close.
Posted by John Turney at 9:11 AM