Tunch Ilkin—A Name To Be Remembered 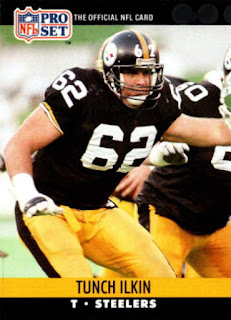 Tunch Ilkin died Saturday, the Steelers confirmed. He was 63. Last Fall, Ilkin announced that he had been diagnosed with ALS (Lou Gehrig's disease) but the official cause of death has yet to be released but it is believed to be complications from ALS that caused him to be hospitalized for the last week with pneumonia.
He is survived by his wife, Karen, and children Tanner, Natalie, and Clay from his marriage to his first wife Sharon, who passed away nine years ago after a battle with cancer.
Ilkin played tackle for the Steelers from 1980-92 and played for the Packers in 1993. He played 177 games in the NFL starting 143. The Turkish-born Ilkin was a Sports Illustrated All-Pro in 1987 and 1988 and by NFL Films in 1989, was All-AFC and a Pro Bowler in 1988 and 1989.
Ilkin, as part of the franchise's 75th Anniversary, was voted to the Pittsburgh Steelers All-Time Team in 2007 and will be inducted into the Steelers Hall of Honor this upcoming season. The city of Pittsburgh recognized Dec. 21, 2020, as Tunch Ilkin Day. 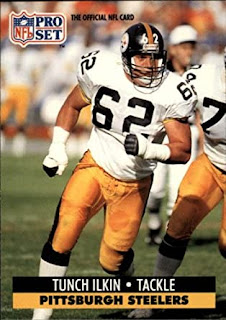 "We are heartbroken by the passing of Tunch Ilkin. He was a man of faith who dedicated his entire life to being a devout Christian and family man.

His passion for the game of football was evident in his everyday life. As a player, he fought his way through tough times of being cut and injured, but continued to make an impact as a leader of our offensive line and made two Pro Bowls.

After his playing career, Tunch continued to make an impact in our community in so many ways. His efforts and dedication to the Light of Life was unparalleled, and his desire to always help others made everyone appreciate him.

He was loved by his family, teammates, and friends. We were fortunate to have Tunch as a player and broadcaster for so many years. Our condolences to his entire family during this difficult time."

Ilkin was an excellent as a pass protector, utilizing a shot set and a quick punch to the defenders chest to slow them down at the line of scrimmage rather than giving ground and then blocking them. He liked to beat defenders to the punch if you will, the Tunch Punch.

Ilkin was drafted by the Pittsburgh Steelers in the 6th round of the 1980 NFL Draft out of Indiana State (was honorable mention All-Missouri Valley) where he earned a degree in broadcast and weighed all of 240 pounds.

Ilkin actually began his career as a center, backing up Mike Webster. In his second season be began converting to tackle (even playing some guard as well) winning the left tackle spot in 1983. He had a decent enough season but struggled in the playoffs against Raiders right defensive end Lyle Alzado. Said Ilkin (who gave up 2½ sacks that day in a 38-10 loss to the Raiders), "I can honestly say I have never had a worse experience in my life than that day against Alzado.  . . . It drove me all off-season. I never want that to happen again".

What made that situation worse was that Ilkin had made comments in the press that Alzado's tactics wouldn't be a problem. What he was referring to is Alzado's yelling and intimidation tactics, not his pass rush tactics. He did say that he was more concerned when he'd line up over Bill Pickel than when he faced Alzado. Nonetheless, Alzado didn't take that meaning, taping the "Ilkin says Alzado presents no problem" clipping to his locker. Howie Long said, after the Raider win, that people might not want to light a fire under Alzado and test his pride.

Ilkin learned his lesson, went to work, and made sure that kind of thing never did happen again.

After Pro Bowl right tackle Larry Brown went down with a career-ending injury Ilkin moved from left to right tackle and played the rest of his career there. He worked and refined his techniques and they drew notice from Paul Zimmerman who is the one who chose Ilkin to the SI All-Pro teams of 1987 and 1988 and also of Steve Sabol and his staff who chose the NFL Films All-Pro team each year.

The previous year Mike Webster did not make the Pro Bowl but said he had no problem with that but he was disappointed for Ilkin who he said was had a "Pro Bowl season" and was worthy of being chosen. One scouting firm agreed, ranking him as a top-11 tackle in 1986 and a top-six tackle in 1985. (For what it's worth they ranked him as the best in the NFL in 1987 as well).

So while the major All-Pro teams (AP, PFWA, NEA, and SN) never selected Ilkin scouts and insiders like Sabol and Dr. Z noticed his play. Buy our count he was a cut above from 1985-89 making esoteric All-Pro teams in 1987-89 and ranking on that same level in 1985-86. If you throw in the fact he got (he got an All-Pro vote(s) in 1990 and 1992) it's pretty clear his level of play was higher than his "official" two Pro Bowl resume might suggest. 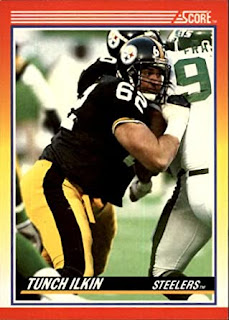 As for Ilkin's name, Tunch Ali Ilkin, he said his mother (Miss Turkey, 1950) saw the name in the paper and liked it. His middle name was from an uncle. He said as a younger he got into fights about his name until he finally outgrew the teasing.

After his career, he used his broadcast degree and football knowledge working for the Pittsburgh Steelers Football Network as the color analyst. He also co-authored two books, titled In the Locker Room and Forged In Steel

Additionally, he worked with a variety of causes, including the Light of Life Rescue Mission, which brings aid to those suffering from homelessness and addiction. He also was involved in many other charitable and Christian organizations that aimed to help the less fortunate.

All reports say that Iklin was a good football player but an even better man. We join in the mourning for Tunch Ilkin. He sounds like he was a terrific human being and that is what matters most.