George Webster—What Happened on the Way to All-Time Greatness 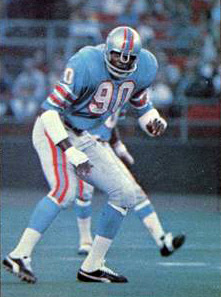 When George Webster exploded on pro football in 1967 he was seen as one of the most talented, sleek and effective outside linebackers ever. He rivaled future Hall of Famer Bobby Bell as the best at that position in the AFL and that was just in his first three seasons.
Not only was Webster All-AFL he was making All-Pro teams that chose from both the NFL and the AFL.  He was named to the AFL's All-Time Team, again, after just three seasons. One can debate whether a player, any player, with just three seasons of service, should take a slot but what cannot be debated is that Webster was one of the two best outside 'backers in that league history, based on peak performance.
A few years ago when Peter King at Sports Illustrated got together an all-time draft Ernie Accorsi picked Webster as one of his outslide linebackers, again largely based on Webster's first few seasons Oilers teammate Elvin Bethea  called Webster "one of the greatest linebackers who ever lived." 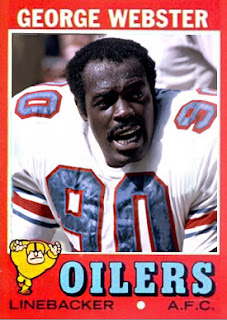 He was the AFL's consensus Rookie of the Year (UPI, SN, NEA) and was the AP's Defensive Rookie of the Year and was a consensus All-AFL selection. In 1968 he was consensus All-AFL and consensus All-Pro (combined AFL-NFL) pick. In 1969 he was again consensus All-AFL and made one of the All-Pro teams.
It would be hard to find, even to this day, many outside linebackers that were so highly honored in their first three seasons. Lawrence Taylor is one, Darius Leonard and Derrick Thomas are a couple of others perhaps Robert Brazile. Larry Grantham was highly honored in the AFL's early years but combined All-Pro teams were not yet around.
But, once again, as we've seen too many times among great players, a knee injury derailed Webster's career path in his fourth season. And it seemed he never was the same after. Webster always denied the knee was an issue after his 1970 operation but it seems that it had to have had an effect on his career. Webster accused the media of overplaying the knee issues but something was wrong. 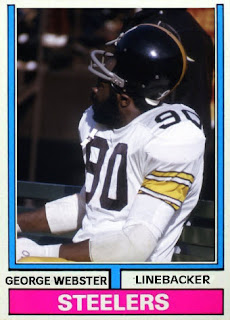 At the midpoint of the 1972 he was traded to the Steelers for Dave Smith (he of the early celebration highlight) —
Credit: NFL, Fair use claim for education and criticism
Chuck Noll said that "when healthy" he was as good as any linebacker out there. In Pittsburgh Webster backed up Jack Ham and Andy Russell and then in 1973, his only full season in Pittsburgh, he did the same. He also played an interesting role on a nickel package, essentially taking the place of J.T. Thomas as a nickel back—essentially playing a hybrid safety linebacker spot (roverback, it might be called) 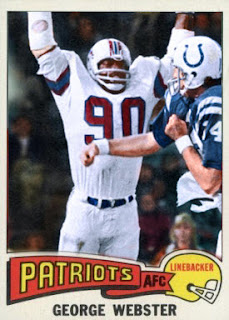 In August 1974 the Steelers shipped him to New England for a 1975 tenth-round pick. The Patriots who were playing the 3-4 defense as a base, were the first team to commit to doing it, though his Oilers were trying but didn't really get it going until midseason. By week two he was a starter and was a strong performer for the Pats defense. He had a career-high 4.5 sacks and started most of the season and ended with 75 tackles.
The Patriots new scheme pushed the Patriots to fourth in the NFL against the run (up for 26th) and trailing only the Rams, Cowboys, and Redkins and finishing ahead of the Steelers and Vikings—pretty good company.
In 1975 he got hurt after ten weeks but was playing solidly. In his final year of 1976, he was a backup/role player for the Patriots and also as a nickel linebacker in 40 sub (nickel or dime) and 5-1 packages. He still had his height and smarts to cover or dog in that role.
In August 1977, Webster was traded to the Dolphins for a conditional pick but he failed his physical (the knee) and was returned to the Patriots who quickly waived him.
We have to think what might have been.
At Michigan State, he played a roverback position with his size and speed—part safety, part linebacker and even part defensive end. As a senior, Webster recorded 93 tackles, including 10 for losses, as Michigan State ranked third nationally in rushing defense, allowing just 51.4 yards per game.
Webster was a two-time consensus All-American and two-time All-Conference selection helped Michigan State (also earning three letters)  to a combined record of 19-1-1 in 1965-66 as the Spartans won back-to-back Big Ten Conference and National Championships (1965 consensus) and were 23-6-1 in his three years as a starter. The 1965 and 1966 Spartan defensive units still rank as the best in school history in most statistical categories.
In 1987 Webster was inducted into the College Football Hall of Fame and in 1992 was a charter member of the MSU Athletics Hall of Fame Class. Four years later he was chosen as a member of MSU’s Centennial Super Squad.
Additionally, he was named one of the 100 Greatest Players of All-Time by CollegeFootballNews.com. and in 1999 Webster was named one of the starting safeties on Sports Illustrated's NCAA football all-century team.
His coach, Duffy Daugherty, said of George, "He doesn't tackle people. He explodes them!" and added, "George was the greatest football player I ever coached."  His said former Spartan defensive coach Hank Bullough said, "Webster played like a Cobra striking his prey."
High praise indeed. 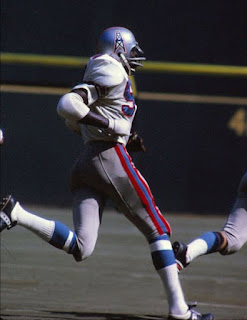 Webster's 6-4, 220, frame and log limbs made his special on pass coverage. In 1967 he was credited with 19 passes defended. That is a nebulous category and is a judgment call by the scorekeepers. That stat includes passes deflected, times when a player is in good coverage position, and the ball is targeted to the covered player. However, those judgment calls apply to all teams in all years and with all those qualifiers we never need a linebacker with more than 19 "PDs". All we can do is report what the gamebook noted in the defensive charts.
However, what is not nebulous is that Webster was a great pass defender as a 'backer. He could run with backs and extend his hands and knock down passes or affect the quarterback's sightlines. He didn't have great base due to his body type—he was a lanky angular player, but film study shows he could string out sweeps to his side and was excellent at chasing plays away from him, extraordinary even.
If Webster came out today he'd likely need to put on some weight, perhaps 15-20 pounds, but would be in the Fred Warner or Tremaine Edmunds category or even an Anthony Barr. A tall, rangy off-the-ball linebacker with fine speed, long limbs, tacking ability than could go sideline to sideline, as the cliche goes.
We don't know if Webster was right when he chided the media about mentioning his knee issues for his lesser production or if he was simply being an athlete with pride who was not going to make any excuses. We suspect that the knee had to be a problem because it, at the very least, cost him a lot of games and did seem to limit his production. he was one player before and a less productive player after. 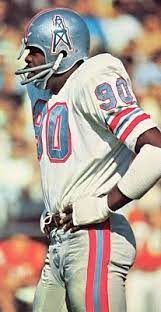 Jimmy Stevenson and Alan O'Day penned a song entitled "Rock And Roll Heaven" which The Righteous Brothers recorded. In it there is this lyric, "If there's a rock and roll heaven, well you know they've got a hell of a band" referring to all the great musicians who died early such as Janis Joplin, Otis Redding, Jim Croche, and others.
Well, if we believe in forever and following the lead of that song, maybe one day players like George Webster can explore the roads not taken in the eternities and see what might have been if he had been able to be 100% healthy. Maybe there is that football "Field of Dreams" where we can see the best of the best at their best. Webster, among others, would be on our "to watch list" because if there is a football heaven, "You know they have a hell of a team".
Webster passed away in 2007. At that time the New York Times penned, "In 1989, Webster applied for benefits as totally and permanently disabled. He was found to have lost most use of a hand, foot, knee, and ankle as a result of football-related injuries but did not meet the National Football League’s definition of totally disabled."
The Times went on, "In 1998, the Supreme Court let stand a finding by the N.F.L.’s retirement board that Webster’s disability was not related to his football career. Football-related disability benefits are $4,000 a month; nonfootball disability monthly benefits are $750."
After that and prior to his death Webster had a couple battles with cancer, heat issues and had both legs amputated. He could have used that $3,250 a month difference in his monthly check.
We cannot pretend to know all the facts surrounding Webster's disability nor what the exact definition of "totally disabled" by the NFL's retirement board is nor why the Supreme Court sided with the NFL over Webster. We don't know those answers.

All we can say is that it sucks and that the NFL pension issues for pre-1993 players are still an issue and that we think all monthly checks should be higher, whether a player meets any definition of disabled or not. Any system in which a guy like this can be denied needs to be changed.
Since 1993 the league's popularity grew and while pos-1993 players' pensions and benefits rose dramatically, the pre-1993 player's benefits did not grow in real dollars. The NFL and NFLPA will tell those who will listen that the percentage increases are high, and they do sound good. But if you have a 200% increase in a $100 check, it's not much in dollar amounts. In our view, it's just spin.
One more thing, then the rant is over—the NFL and NFLPA split the gross revenues, historically, about 60% for players and 40% for owners, give or take. Each side should pay 1% to retired players' funds, so the players get 59%, owners 39%, and retired players 2%.
That two percent would cover a lot of financial issues and if it is a fixed percentage then if revenues go up, everyone's pay/benefits go up. Fair is fair. We've floated that idea for at least 15 years but there is no way the owners and players could cough up so much. And this way, there wouldn't need to be any kind of board judging a man's injuries. Everyone gets enough to live on. Period.

Certainly, more information is available on that issue through the various retired player organizations. Or you can watch Blood Equity.
Rant over. 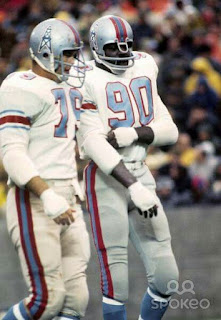