Today PFJ looks back on one of the greatest achievements in NFL history. A record that celebrates its 100th anniversary today. A record that after a century may never be broken.

On this day in 1921 Ted Nesser played with his son Charles Nesser for the Columbus Panhandles against the Akron Pros. It is the first and only father-son playing combination in NFL history.

The great Nesser family had seen six brothers play for the Columbus Panhandles, the backbone of the team for two decades (1902-1904, 1907-1922) John, Phil, Ted, Fred, Frank and Al. One of the toughest early pro football teams were just a shell of themselves by 1921 when the APFA-NFL was just in its second season.

The 1921 Columbus Panhandles were coached by Ted Nesser and fielded a roster of “old” Panhandle stars with a few new players sprinkled in. Gone were longtime stars Hi Brigham and Pop Schneider, who retired for good this time. Back were all five Nesser brothers (minus Al Nesser, who was playing for Akron Pros), Hal Gaulke, Oscar Kuehner, Joe Mulbarger, Homer and Emmett Ruh, Will Waite, and Oscar Wolford. The new recruits included Ted Hopkins, a nephew of the Nesser brothers. Also added were Morris Glassman, an end who played at Commerce High School in Columbus, and Harry Bliss, a halfback who lettered at Ohio State.

But it was the team’s last recruit that excited coach Ted the most, more than any other teammate would, and it’s probably why he hung on to play one more season. In 1921 Ted Nesser would play with his nineteen-year-old son, Charles Nesser. The two would make history by becoming the only father-son combination to play together in APFA/NFL history. The historical twosome made the family proud and set a feat that might never be matched.

Charles was built a little different than his father. Ted, at 38-years old, was roughly 5-feet-10 and weighing about 230-pounds. He was built like a bowling ball and was tough as nails. He started playing with the Panhandles in 1902 and he would play his 17th season with the railroaders in 1921.

While Charles grew up to stand 6-foot-2, filling out at 195-pounds. He followed his father’s footsteps by becoming a boilermaker at the Pennsylvania Railroad, a job he would do for 50 years. Very young at 19-years old, Charles would be playing his first and only year of professional football with the Panhandles.

The young Nesser boy would play with four of his uncles in 1921 as John, Phil, Frank and Fred would also play in 1921. Only uncle Al would not play with his family, instead played with the Akron Pros.

The first game of the season for the Panhandles was against the best team in pro football: the 1920 APFA champion Akron Pros. Two days before the game the Akron Beacon-Journal ran an ad promoting the game and football’s most famous family:

One Admission $1 plus war tax

The defending APFA champs had a lineup of stars including Fritz Pollard, Paul Robeson, Rip King, and of course, Al Nesser. None of the 2,000 fans who watched the game at League Park in Akron, knew they were watching NFL history. The mostly came to watch their hometown heroes kick off the defense as pro football’s champions.

That day the Panhandles played the champs close but lost, 14–0. The Ohio State Journal wasn’t impressed by either team:

“In a listless game, marred by slow play and numerous fumbles, Akron’s champions [sic] football team, opening its season here today, defeated the Columbus Panhandles 14 to 0. Seven of the famous Nesser brothers participated in the contest, Al Nesser with Akron and six with the visitors. After the teams had battled in midfield until near the first half close, Coach Tobin, dissatisfied with Cheek’s work at quarterback, entered the game. A line buck, followed by a long pass from Kramer to McCormick, brought a touchdown. Copley kicked goal.

In the third quarter Akron’s line started opening up big holes through which Fritz Pollard, colored star from Brown darted for big gains. After he had carried the ball to the last yard line, McCormick plunged over for the last touchdown.”

Despite the loss the game made NFL history as Ted Nesser played the first league game with his son Charles. Ted, playing center, actually snapped the ball to Charles, who played right halfback. What a moment for the team and for the Nesser family with father and son playing together, losing to Akron didn’t feel as bad as it should have.

Later in the 1921 season the father-and-son duo received national attention. After three losses to start the season, the only good news for the railroaders was the play of the father-and-son combination of Ted and Charlie. The famous teammates had now played three games together, and the local press took notice. On October 15 the Columbus Citizen wrote an article on the unique teammates:

“When the father and son movement in the Nesser family here gets under way, believe us, there’s action. For the father, Ted Nesser, is the 231-pound center of the Panhandles professional football team. And the son, Charlie Nesser, plays in the backfield of the same team. Ted is 38, Charlie 19.

Ted Nesser is one of six football-playing brothers. All are members of the Panhandles and the Akron pros. Brother played against brother when recently the teams in Akron. Al Nesser, the youngest of the brothers, is an Akron guard. Nesser brothers on the Panhandles are: Fred, halfback; John, quarterback; Phil, lineman; and Frank, the star of the team, who plays full.

Charlie’s father, Ted, and his uncle John, of the Panhandles, opposed some of the strongest teams in history, 15 years back. In 1905 the two played with the old Massillon Tigers, who defeated the Carlisle Indians 8 to 4 at Cleveland, playing in six inches of snow. In 1906 Ted and his brother were with the same team when it defeated Chicago University 9 to 3.”

The story was accompanied by photos of Ted and Charles. It was probably the highlight of the season for the Panhandles, as wins were hard to come by for the railroaders as they finished the season with a 1-9 league record. 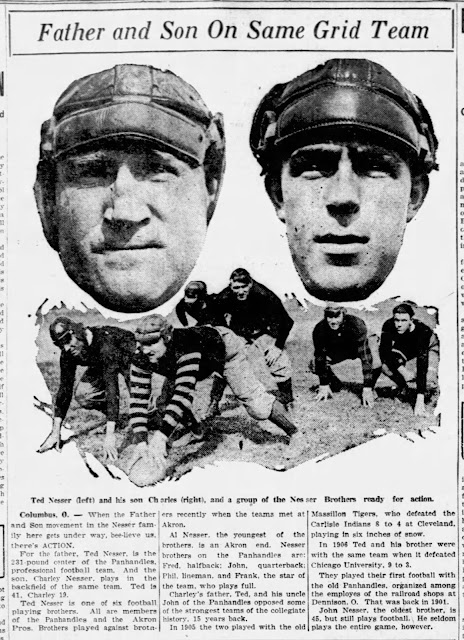 Charles and Ted Nesser played together in all 9 NFL games as well as a non-league game against the Ft. Wayne Friars. It was against the Friars that young Charles scored his only touchdown- while his father Ted kicked a field goal- in a 17-7 victory. Truly a family affair for the Nessers.

On the 100th anniversary of Charles and Ted Nesser playing together as the NFL’s only father-son duo PFJ salutes this historic achievement. 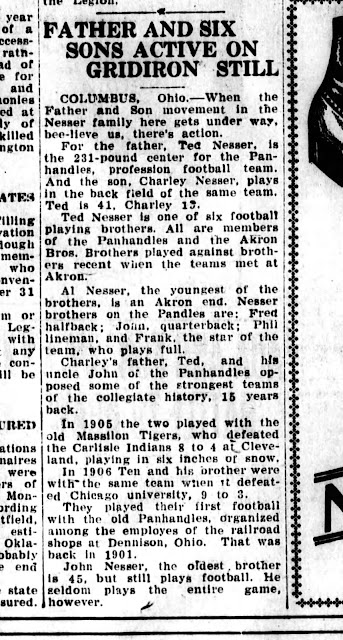 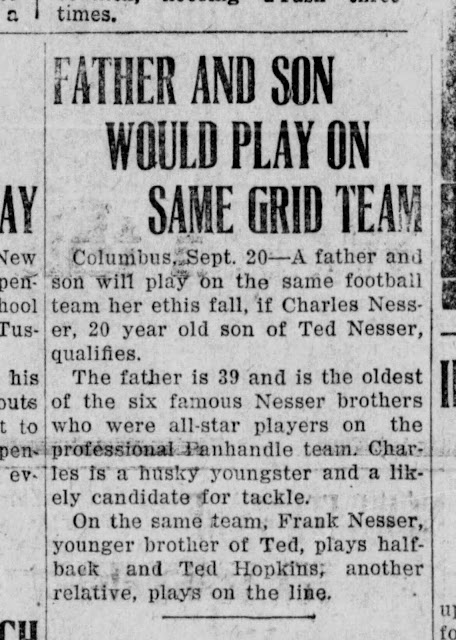