The Works of Robert Riger
(Part 2 of 3)
By Chris Willis, NFL Films 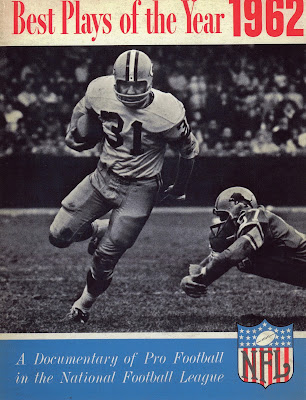 On Monday, Pro Football Journal posted an entry on The Pros by Robert Riger. Two years after releasing that volume Riger produced another book project, titled Best Plays of the Year 1962: A Documentary of Pro Football in the National Football League.
After releasing The Pros, Riger continued to shoot photographs and draw illustrations of the NFL. After helping author W.C. Heinz with photos and illustrations for Run to Daylight! A week with Vince Lombardi, Riger came up with a new way of documenting the football season. Inside the cover Riger described his book:
“This is a documentary of fourteen Sundays of pro football: the 1962 seasonthese are not called the best games because this would imply that those not covered were something less. This is my journal in words and pictures of a year of exciting pro football covering the entire country and - a fan with a ticket and a plane ride each Sunday to see one game anywhere in the United States; to see the and the faces of men close up on the field, to talk with the coaches and players and owners in planes, buses, locker rooms; to share their invaluable insight and understanding of this great national game. This belongs to the players. These pictures are only good because the men play with an intensity that creates a grand dramatic image.”
The book actually starts with the 1961 NFL Championship game won by the Green Bay Packers. After that Riger traveled fourteen straight Sundays capturing the NFL with his camera. Starting Cleveland as the Browns defeated the Giants 17-7. Capturing eight images of Jim Brown on his touchdown run, Riger asks Giants head coach Allie Sherman after the game whether Brown was the greatest he’s ever seen.
“I don’t say the greatest because I will never say that about anybody. I don’t know if I’m qualified. I think that ‘greatest’ is absurd in football. There’s nobody in football who can say, ‘This is the greatest team- this is the greatest ballplayer- They can say, ‘this is one of the greatest I have seen.’ I think that’s true. But who knows what went on before, and who knows what’s going to go on ahead or even in time? It’s too relative a game. There’s nobody qualified- so I say Jimmy Brown is the greatest I have seen.”
Over the next thirteen weeks Riger travels to Milwaukee, San Francisco, Green Bay, Chicago, Pittsburgh, New York, Cleveland, Philadelphia, Los Angeles, Detroit, Washington, back to Detroit and Chicago. At each stop he photographs each game from the talks to the players and coaches after the game to get more insight what happened on the field.
Some of the best stuff is the quotes from players and coaches. Within those quotes are Rigers’s photos and diagrams explaining one of the big plays that happened. One of the bigger and historic games from 1962 that he reports on is the Lions “Thanksgiving Day Massacre” against the Green Bay Packers. “I’ve never been rushed like that,” said a weary Bart Starr to Riger. “That was the (best) defensive line I’ve ever faced. I got to know those boys pretty well out there.”
One of the more interesting plays that Riger goes over in detail is Bears tight end Mike Ditka. During the October 14 against the 49ers Ditka explains a few of the pass patterns he ran to get open.
“Coach Halas recently added to the short pass potency of our attack by having me split on the flanker side and dropping our fullback in the slot between tackle and end. This creates a problem for the linebacker and defensive end, usually breaking one of us free quickly. If the defender another linebacker to cover, they become vulnerable on the weak side.”
Best Plays of the Year 1962 is 96 pages in length and features over 125 photos, 23 diagrams and 5 full-page illustrated drawings of:
Best Plays of the Year 1962 was published in hardcover and in 1963 by Prentice-Hall.
The following year Riger duplicated the process for Best Plays of the Year 1963: A Documentary of Pro Football in the National Football League. It was published in 1964 by the same publisher- Prentice-Hall. This time he ends the book with the 1963 NFL Championship Game. In between he covers 14 action packed weeks of NFL football. For the hardcover Prentice-Hall made a slipcase, similar to The Pros, this case featured a drawing of Bears quarterback Billy Wade with cocked, ready to pass. 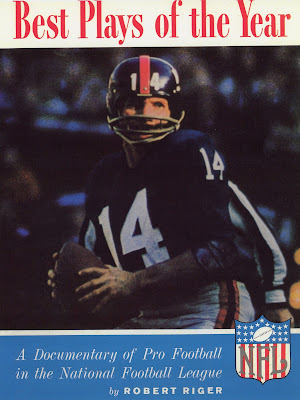 starts his 1963 journey in Baltimore covering the Giants 37-28 victory over the Colts and it just happened to be Don Shula’s first game as Colts head coach. The future NFL’s all-time winningest coach would see better days.
than was off to Minnesota, Pittsburgh, Chicago, New York, St. Louis, Cleveland, Dallas, back to New York, Chicago, San Francisco, Detroit and back to New York. During the fifth week in Cleveland Riger captured a fierce battle between the Browns and Giants. He focused on the of Jim Brown versus Sam Huff. This version is also 96 pages in length and contains over 150 photographs and diagrams. It also features six illustrated drawings.

But on page 67 was the best illustration by Riger in the two years he did these Best book. It was a drawing of John F. Kennedy with his hand out. Under the headline of “The Last Gesture” Riger writes two pages on Kennedy and his fatal trip to Dallas on November 22, 1963. Also included is a photo of a flagpole at half-staff. A same tribute to the fallen President.
On the inside cover of the 1963 book Riger was able to get few players and coaches to endorse his work. Some of the biggest names in the NFL stepped up to help.
“Bob Riger is a fine reporter with great imagination and he can capture football in pictures better than any man I know” -  Vince Lombardi
“BEST PLAYS really shows what our business is all about.” -  Y.A. Tittle
“This book is superb. Bob sees everything on a football field.” -  Allie Sherman
“Bob Riger sees a football game as we see it. No one shows like this.” -  Johnny Unitas
In week fourteen Riger stayed close to home in New York to cover the Giants-Steelers game. If the Giants won they would play the Bears for the NFL Championship. On that day Riger saw a well-oiled Giants team at its best, as Allie Sherman’s squad took care of the Steelers winning 33-17. Setting up a championship game in Chicago.
The Best Plays of the Year 1963 finishes up with a recap of the 1963 title game at Wrigley Field. On the day before the game Riger interviews Bears head coach George Halas.
“Now we here on the eve of the Championship game. I want to win tomorrow. We will be terribly disappointed if we don’t win. However, it has been a fine year and remember, when you win a championship you earn it. The hours of victory will be brief on that field tomorrow, but behind them are the endless, tedious hours of preparation and planning all year long.”
Papa Bear didn’t have to worry too much as his Bears went out and harassed NFL MVP Y.A. Tittle into throwing five interceptions to defeat the Giants 14-10. At the age of 68 won his Eighth NFL Championship (Sixth  a coach), but his first since 1946.
In temperatures that reached a high of 4 degrees Riger shot rolls of film that would eventually make up eight pages of the game recap- using 14 total pictures.
Prentice-Hall released the book the next year.
After producing Best Plays of the Year for two years Riger stopped doing them. Maybe sales weren’t good the second time around, or that Riger had more projects to do. It was around this time that he started to work with ABC on some of their sports shows including Wide World of Sports.
But for two seasons Riger had given football fans more of his fantastic work and football images.
(Friday: “” photo)
Posted by cdw83 at 5:44 AM