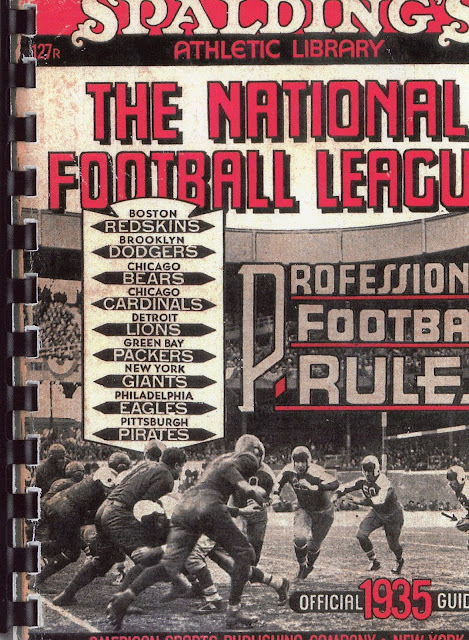 Last week Pro Football Journal wrote about two different early NFL promotional campaigns with the  NFL Courtesy Pass and the Who’s Who in Major League Football publication. This post will discuss one of the NFL’s more long-lasting ideas that chronicles the league’s rich history.
In the April 18, 1935 issue of the NFL Bulletin, that was published by the NFL office in Columbus, Ohio and sent to all the NFL owners, NFL President Joe F. Carr presented his new promotional idea. Carr wrote to the owners about an agreement the league made with a leading publishing company to produce an official NFL guide. “It should be a great means of advertising for us, and I am sure will meet the approval of the entire membership.”

Carr then went on to say that work on the guide had already that he wanted the teams to have their publicity man write an article, “covering the activities and history of your club” and send a “group picture of your club, together with a photograph of the President and coach of your club.”
Carr’s promotional idea was to publish an official guide for teams, press members, and fans. He contacted the American Sports Publishing Company in New York to help with the project. American Sports Publishing (ASP) was founded by the late A. G. Spalding and was the premier sports publisher in the country at that time. Albert Goodwill Spalding and his brother operated the world’s most successful sporting goods manufacturing and retail company- Spalding Sporting Goods. After his sporting goods company became popular Spalding founded the publishing house American Sports Publishing.

The ASP produced a Spalding Guide on every instruction, rules, and history. The guides for golf, tennis, basketball, college football, and Major League Baseball contained historical and statistical information from the previous year’s season. Included in the guides would also be advertising sections the Spalding sporting goods empire. The guides would be sold at the newsstands and sporting goods stores across the country. Carr had the best in the business to produce his publication.﻿
The first Official Guide of the National Football League was published and sold in 1935 at a cost of twenty-five cents. It contained roughly fifty-eight pages of photos and information. On the cover, below the title and to the left, was a list of the nine NFL franchises and an action photo from the 1934 NFL Championship Game between the Bears and Giants. Each team had their own section with the history of the franchise with accompanying photos of the team and of the team’s president and head coach. The remaining pages of the guide included league statistics for the 1934 season; a review of the 1934 season with scores; all-time standings (1922–1934); a list of All-Pro teams; and a rules section. On the back cover would be the 1935 NFL schedule. On page 5, President Carr wrote a one-page “Introductory”:

“In the face of many obstacles, professional football has now taken its place as one of the seasonal attractions for the sport loving American public, and the initial number of the National Football League Guide is offered as a chronicle of the league’ activities and a medium for promulgating the official playing rules of professional football. . . . It is hoped that the new Guide will be received in the spirit in which it is published, and that it will take its place with the other annuals that represent so successfully the various athletic sports of the United States.”

Before the season started Carr sent bound volumes of the Official Guide to each owner of the league. The first guide of the NFL was one of the most innovative promotional ideas that Carr came up with during his time as NFL president and has stood the test of time. In 2015 the NFL published the eighty-first time the 688-page Official Guide of the National Football League- currently called the Official NFL Record & Fact Book. The league’s official record book has become a staple for anyone interested in the league and professional football. It has become the standard bearer and final word the history of the NFL. In 1935 any football fan could buy the first ever guide for a whopping twenty-five cents.

From 1935-1940 American Sports Publishing, Spalding’s Athletic Library, published the Official Guide of the National Football League. Joe F. the guides from 1936-1938. After he passed away in 1939 Carl Storck took over for the next two years (1939-1940). The guide was sold for only 25 cents until 1940 when it was increased to 35 cents. The 1936 edition featured the same cover as 1935, but the years that followed would soon feature a different cover photo. Mostly an image from the previous year’s Championship Game.
﻿
The 1939 edition featured a special one-page tribute to Joe Carr, who passed away in May of that year, and a three-page article by Red Grange titled “Red Grange Reviews Progress of Professional Football.” Also in the 1939 edition was a 29-page “Educational Section” that featured all the league’s top players and coaches going over a certain aspect of the game. George Halas (Blocking); Steve Owen (Line Play-Latest Models); Dutch Clark (Kicking); Curly Lambeau (Forward Passing); Johnny “Blood” McNally (Receiving the Forward Pass); Bert Bell (Offensive Football); Ray Flaherty (Duties of the End); Mel Hein (The Pivot Position); Posty Clark (The Quarterback); Ernie Nevers (In the Backfield); Elmer Henderson (Backfield Offense); and Charley Porter (Training for Football) all penned short articles. The 1939 edition was over 130 pages in length.
The later editions also had several pages of independent football teams that included the American Professional Football Association and the Dixie League. Each Guide would end with the new Rule Changes in the NFL.

Then in 1941 new NFL Commissioner Elmer Layden, who replaced Storck, stopped the agreement with Spalding, as the NFL hired the Fred J. Ringley Company in Chicago to publish the Official Guide.

The first six editions of the NFL’s Record & Fact book was a great partnership between the NFL and Spalding’s American Sports Publishing.
Posted by cdw83 at 6:07 AM