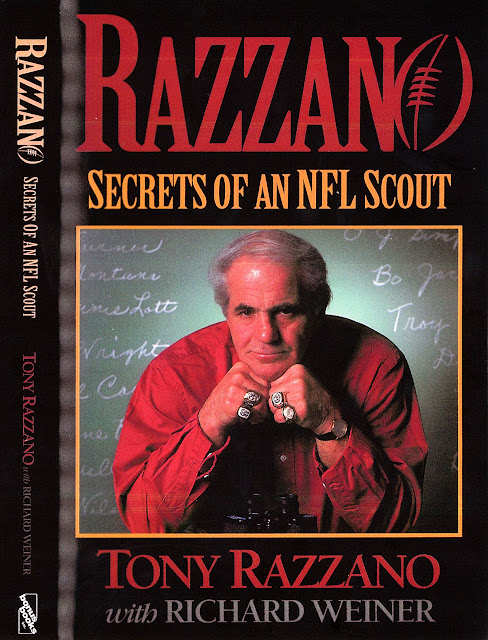 In 1993 former 49ers Director of College Scouting and long-time NFL scout Tony Razzano wrote a book, Razzano: Secrets of an NFL Scout. It was published by Bonus Books.

Razzano spent three years in the Army prior to enrolling at the University of Pittsburgh (1946-1951) where he earned three letters in both football and wrestling. After graduating from Pittsburgh, Razzano eventually got a job as a high school coach at Sharon High School in Sharon, Pennsylvania, coaching high school for over a decade.

Razzano began his scouting career with the Washington Redskins (1963-1967) in 1963 working under good friend Bill McPeak as a weekend scout. “My high school team would play on Friday nights, then I’d go away on Saturdays and Sundays. I covered some of the Big Ten schools to get my feet wet,” wrote Razzano.  Eventually Razzano would make scouting his full-time profession working for the Redskins until 1967. In his book Razzano talks about those early days of preparing for the Draft.

“The Redskins had no scouting staff. In fact, there was little or no travel done by any NFL teams to check out the collegiate talent. Mostly, the preparation- if you can call it that- consisted of NFL staffers picking up the telephone and calling coaches at collegesafter reading about the players in magazines…teams didn’t even have War Rooms then, just  discussions with lists of names. Talk about gambling with somebody’s money.”

Razzano left the Redskins to work for the San Diego Chargers (1967-1971) under future Hall of Fame head coach Sid Gillman. After Gillman left after the 1971 season, so did Razzano. Eventually ended up with the New England Patriots as an area scout (three years, 1976-1978).
When Bill Walsh became the 49ers head coach in 1979 he hired Razzano as a special assistant in the scouting department. He had four scouts under him, Dan Conners, Max McCartney, Ernie Plank, and Neil Schmidt. He would closely work with John McVay, 49ers Director of Player Personnel. In 1983 McVay would become Vice-President and General Manager under Walsh. Three years later Razzano would be promoted to Director of College Scouting, a post he would hold until 1991.
Throughout his time with the 49ers he helped build one of the greatest dynasties in NFL history. Working alongside Walsh and McVay the trio meshed perfectly together to bring in the best talent available through the Draft process. From 1979 to 1991 Razzano helped bring in some great players who would help the 49ers win four Super Bowls in the 1980’s.

In his book Razzano presents his scouting chart with grades. Players with grades from 7-9 were TOP players while anything below a 5+ was a fringe player. 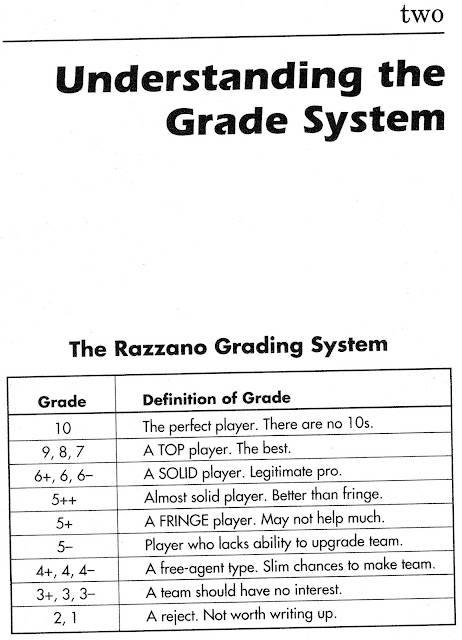 In Secrets of an NFL Scout Razzano reveals 30 years of graded players. Some of the biggest names in the NFL Draft from 1966-1992 are here. Below are some of the grading cards from Razzano's time as an NFL scout. 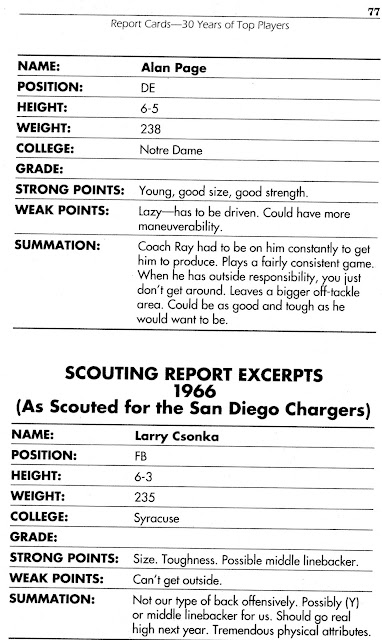 When Razzano was with the Redskins and Chargers he scouted Notre Dame DE Alan Page and Syracuse FB Larry Csonka. Too early for his grading system Razzano liked Page, but wasn't quite as high on Csonka. Thought he might be better as a linebacker than a fullback. 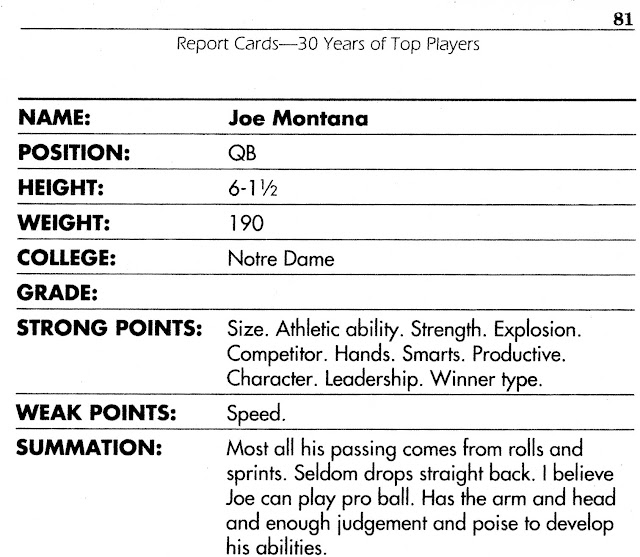 For the 1979 Draft Razzano had a positive report on Notre Dame QB Joe Montana. In his book Razzano gives himself more credit in the drafting of Montana than Walsh, claiming that Walsh really wanted Steve Dils from Stanford. In the end it was Walsh's decision to take Montana. 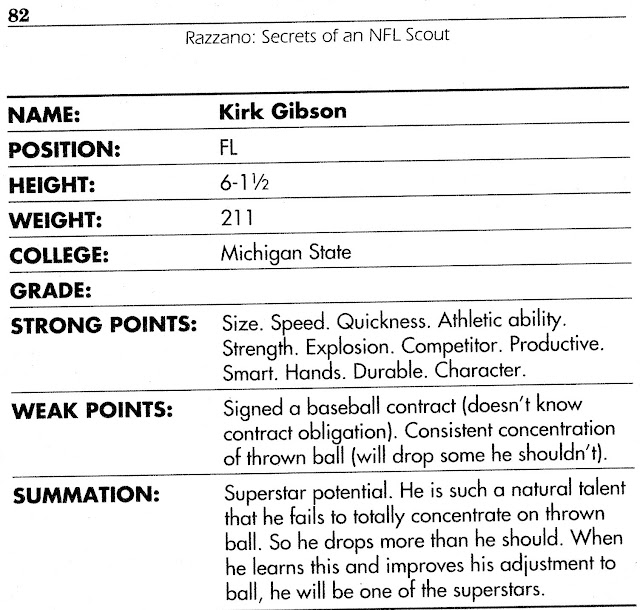 Another potential college player that Razzano  in 1979 was Michigan State WR Kirk Gibson. Razzano had written "superstar potential" for Gibson, who of course in the end choose to play major league baseball. 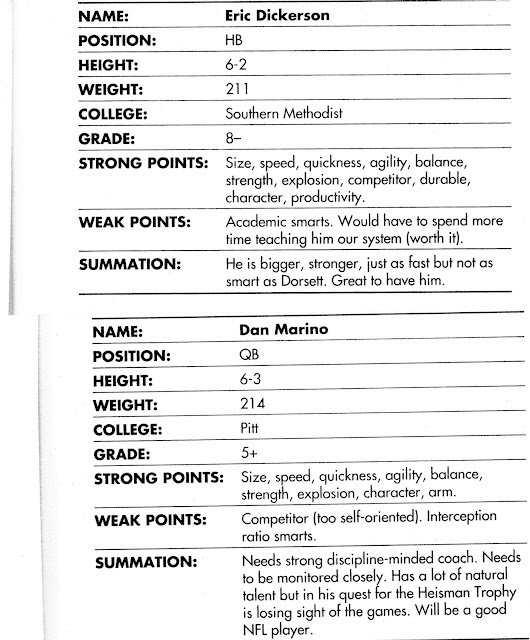 In the 1983 Draft Razzano reveals that SMU RB Eric Dickerson had a grade of 8-, one of his best grades of all-time. But for Pittsburgh QB Dan Marino had  a pathetic grade of just 5+. Despite the fringe player  does say that Marino "will be a good NFL player." 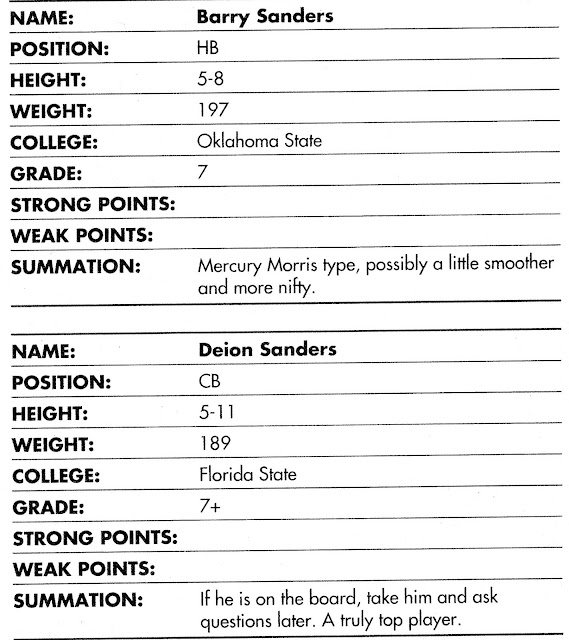 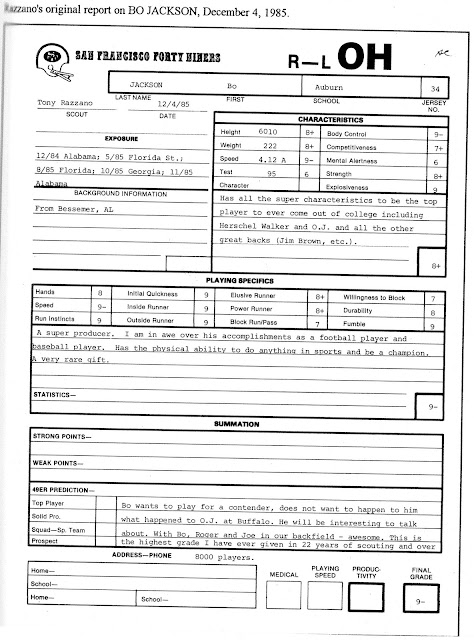 One of the best grades Razzano ever gave out was for Auburn RB Bo Jackson with a 9-, nearly perfect. Above is the full scouting report on Jackson. 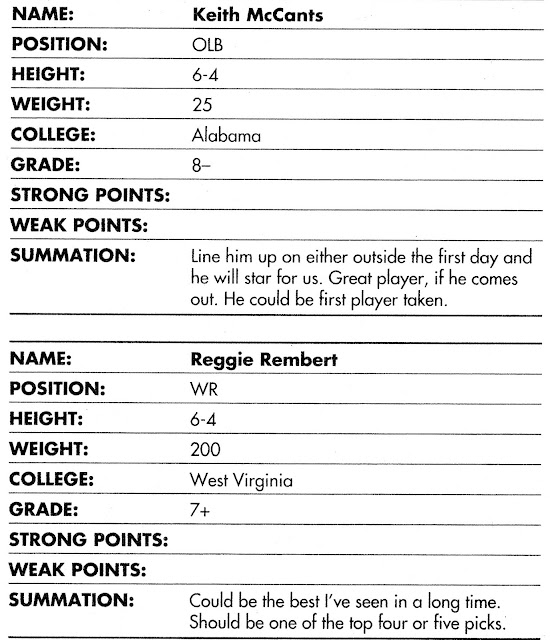 Two of Razzano's biggest misses occurred in the 1990 NFL Draft. He had high marks on Alabama LB Keith McCants (who everybody had high) with a grade of 8- and West Virginia WR Reggie Rembert with a 7+ McCants went number 4 overall to the Tampa Bay Buccaneers but never developed into a Pro Bowl player, while Rembert went to the New York Jets in the second round (#28 overall). Rembert  a  playing in just 28 games, catching 36 passes and one touchdown.


The books  over 120 scouting grades from players over his thirty years as a scout. All the big names are here such as Emmitt Smith, Lawrence Taylor, Marcus Allen, Dan Marino, John Elway and many more. Razzano also goes inside the 49ers War Room with stories of drafting the great 49ers players.

After leaving the 49ers in 1991 Razzano worked as a free-lance scout and consultant being hired by several NFL teams to help with their drafts.

On July 2, 2002 Razzano passed away at the age of 77. His son, Dave Razzano, has continued the scouting tradition, working the past two decades as  NFL scout currently with the Indianapolis Colts.