The Pros: A Documentary of Professional Football in America (1960)

The Works of Robert Riger
(Part 1 of 3)
By Chris Willis, NFL Films 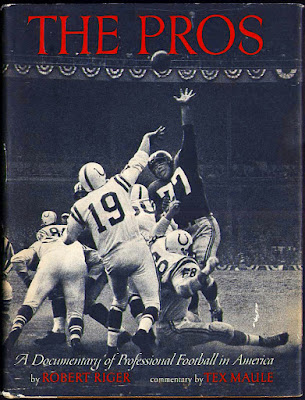 In 1960 one of the more important and artistic pro football books ever published was the volume, The Pros: A Documentary of Professional Football in America, which came from the brilliant and talented mind of Robert Riger.

Robert Riger was born on June 2, 1924 in New York City. He went on to attend the United States Merchant Marine Academy and served three years in the Merchant Marines during World War II. After the war Riger studied art at the Pratt Art Institute in New York. Although he didn’t play any sports at a high level Riger fell in love with the artistic nature of the games. He especially gravitated to football. In 1945 Riger drew his first sports scene- a drawing from the 1945 Army-Notre Dame game. The scene required five lithograph pencils and 140 hours. eventually earned his bachelor’s degree from Pratt in 1947.
After graduating Riger found work doing magazine layouts for Esquire and The Saturday Evening Post (1947-1949) where he worked his way up to advertising art director until 1955, when he decided to go out on his own as a full-time freelance illustrator.
The year before making the leap on his own Riger started doing jobs for a first-year fledgling sports magazine titled Sports Illustrated. It’s why Riger wanted to venture out alone, because he wanted to cover and document sports. From 1954 to 1961 Riger would contribute over 1,200 of his editorial drawings and more than 200 of his and advertising drawings to Sports Illustrated. Most of Riger’s work for the used pencil and drawings.
One of techniques that Riger employed to help him in his drawings was the use of still photography. He decided early on to shoot photos at games that he would have developed afterwards that he could reference in his illustrations. Over time he copyrighted more than 90,000 master negatives, with more than 40,000 of them involving pro football. In these photographs Riger’s showed off his artist’s eye for composition and movement.
“He seems to have sensed that the action which was taking place in front of him was not merely , but a form of art as well, a kind of modern American ballet performed with grace, power, and finesse,” once said Pulitzer Prize winner author-journalist David Halberstam about Riger.

passion for pro football and his artistic eye for the game lead him to come up with the book idea for The Pros. It would be a pictorial history of the NFL. “Here is the story, the play-by-play details, the personalities and the memories of America’s fastest-growing sport, from its birth in the Roaring Twenties to its present day success,” he wrote the jacket cover. It was from these photographs, that Riger took during the 1958-1959 NFL seasons, that made up the bulk of The Pros.


Over the years that Riger shot his photos (that spanned over a decade) he used ten different cameras and Eastman-Kodak Kodex film (Tri-x film used for light and different weather conditions). The Pros would be 191 pages in length and feature nearly 250 drawings, photographs and diagrams, with many being spread over two pages and all of his images were in -and-white.
The cover features a beautiful image of Colts quarterback Johnny Unitas, the biggest star in the NFL, throwing a pass over the out-stretched arm of Giants defensive Dick Modzelewski. Inside, the book starts with a photo of Giants kicker Pat Summerall having his head up in full kicking motion as he kicks off to start a game- and we go as readers.

In the Introduction Riger explains his passion for football and how he began to follow the sport: “Because I liked Dutch Clark. I liked the way he looked and played, and I read all I could find about him. As a boy I lived on Coogan’s Bluff over the Polo Grounds, and I watched all the Giants game either from rocks high above the stand or from a bleacher seat.”

In 1950 Riger was given permission to work from the sidelines during Giants games. He tried to capture the sport by sketching the bench and game action, but found he could only capture the quiet moments of the sport in his sketch book. So the next week Riger brought a camera to the game and started taking photos. He found the still images extremely helpful in his drawings. His artistic eye gave his photos all the details and human emotion he would need to make his of the best ever done on pro football. After nearly ten years of shooting the NFL Riger’s images gave The Pros a never-before-seen look at the game that was about to overtake baseball as the country’s most popular sport. To help write the text Riger recruited his good friend from Sports Illustrated- Tex Maule.

Hamilton Prieleaux Bee Maule, better known as “Tex” was the magazine’s lead pro football writer (1956-1975) since 1956. At this time he had established himself as one of the top football writers in the country. In the January 5, 1959 issue of Sports Illustrated, under Maule’s byline, the recap of the 1958 NFL Championship Game the magazine proclaimed “The Best Football Game Ever Played.”
Maule would provide the “commentary” as Riger phrased it on the cover.

In Part Two (pages 24-123) the section starts with a gorgeous sketch of Paul Brown kneeling with Otto Graham standing above him. The remaining pages of Part Two are filled with some of Riger’s best photos. Maule’s subheadings of “The Devotion of the Game”, “TV Bonanza,” and sections on the different positions on the field supplement Riger’s photos.

Full page photos of Bobby Layne (Steelers), Charley Conerly (Giants), and Norm Van Brocklin (Eagles) in the quarterback section are some of the best still photos ever taken, of any era of pro football. In the ensuing pages images of Giants back Alex Webster on the bench (. 48); Lou Groza kicking (. 60-61), close-up of Gene “Big Daddy” Lipscomb (. 84); Colts defensive end Gino Marchetti off the field with his sideline jacket on (. 109) are some of photos of Riger’s work in The Pros.
Part Three (pages 124-184) covers five individual games that include the 1958 NFL Championship Game and four games .


In the recap of the 1958 Championship Game Riger’s most famous shot in the book, the “Golden Arm of Johnny Unitas” appears on pages 128-129. On page 157 a great photo of Giants assistant coach Tom Landry drawing up a play on a chalkboard appears. Just ground breaking images.
Another special addition to The Pros is a three page layout at the very end with diagrams of different formations that had been used in the NFL. Tom Landry provided these special diagrams for Riger.
The Pros in the fall of 1960 by Simon and Schuster for a price of $10.00. The original book was offered in an artistic slipcase that featured a drawing from Riger of a big , from head to toe, buckling up his . Within the slipcase version of the book buyers also got a special folder of five football prints. The set of five featured different illustrations from Part One. Growing up I was able to buy one of the hardcover books with the slip case and was thrilled to see the old prints included. The folder had the title, “The Old Pros” and included prints of: Jim Thorpe (Canton Bulldogs uniform), the Bears’ Red Grange (“Runs the Pass Option”); the Redskins’ Sammy Baugh; the Bears’ Sid Luckman and Bulldog Turner; and the Rams’ Bob Waterfield (“Works the Bootleg Play”).
On the back cover of the book Riger received endorsement quotes from Colts quarterback Johnny Unitas, newly hired NFL Commissioner Pete Rozelle, and NFL Founder and Bears owner-coach George Halas. Rozelle wrote:
“The NFL and its fans are indebted to this new fine book for so vividly portraying the league’s colorful embryonic development and its status today as entertainer of millions of sports enthusiast annually.”

The book quickly became a best-seller. In 1956 Robert Riger’s shot one of his  photos. The image shows a bench shot of Giants tackle Rosey Brown, seated next to Gene Filipski and Don Chandler, as all three wore sideline jackets looking out at the action on the field. To help promote the book, on the October 24 , that photo made the cover of Sports Illustrated. A seven-page pictorial spread of photos under the title of “The Violent Face of Pro Football.” A cover that would cause an up-roar today.


Besides being a best-seller the book received great reviews. Clark Kinnaird of the San Antonio Light wrote: “The arresting up camera studies of NFL players in action and on the sidelines are integrated with illuminating prose by Tex Maule in a superb example of pictorial journalism. A perusal of it is a stimulating instructor in what to look for in a game on TV or in a stadium if you want to see the game at its most exciting best.”
continued to photograph and illustrate the NFL throughout the 1960’s. He also worked at ABC, from 1963 to 1970, and again from 1977-1980, where he won nine Emmys as a documentary filmmaker, working on various aspects of their sports presentations especially Wide World of Sports. In 1981 he worked with Hollywood director John Huston to help create some of the soccer scenes in his film Escape to Victory, starring Sylvester Stallone.
In 1994 he was named Sports Artist of the Year by the American Sport Academy Museum and Archive in Alabama.

died on May 19, 1995 in Huntington Beach, California at the age of 70.  photos and drawings are still some of the best football images that have ever been produced.