LOOKING BACK
By Chris Willis, NFL Films
In 2015 over 17 million fans attended NFL games. But in the first two decades of the NFL one of the biggest challenges that faced the league was just getting fans out to the games. In 1921, when the league was still called the American Professional Football Association (APFA), newly elected league President Joe F. Carr knew the importance media, and editors, as well as special guests to the games. A former scribe himself, writing for the Ohio State Journal in his hometown of Columbus, Ohio, he knew that the local sportswriters and newspapers had a big influence on whether a sports team could be successful or not. The publicity and attention could make or break the team.

Getting the media out to NFL games was quickly a top priority for the new President. After being elected in April, Carr took care of some serious issues first- like writing the league’s first Constitution & , setting up territorial rights for franchises, creating the standard player’s contract, and setting up the league’s headquarters in Columbus. All things that the first President, the great athlete Jim Thorpe, who was not an administrator, failed to do in 1920 when the NFL was founded.

On August 27, 1921 at the NFL Owners Meeting (the third and last time the owners met in 1921) in Chicago, Illinois seventeen NFL franchises gathered at the LaSalle Hotel. Four months earlier Carr, who was also the manager of the Columbus Panhandles, had just been elected NFL President. He had taken care of some of the basic business the league needed done; like rules and regulations and all that good stuff. It was now time to take care of more important business and 2:00 pm he started the meeting.

With owners such as George Halas, Ralph Hay, Leo Lyons and Frank McNeil in attendance the league approved a few new franchises including the Minneapolis Marines, Evansville Crimson Giants, Tonawanda Kardex, Buffalo All-Americans and the Green Bay Packers. That season the NFL would have 21 franchises. At the end of this meeting the owners passed one final issue that Carr had brought to the table. One that the owners didn’t think much one the President knew would help further the prospects of the young league. According to the League Minutes the President was ensured “that season passes be sent from the President’s office to [men] & prominent officials.” 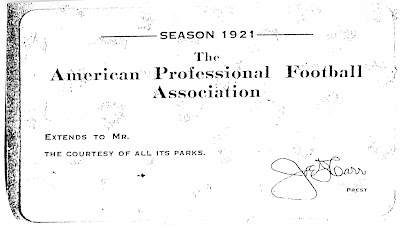 This would turn out to be a good public relations move for the league. Carr’s newspaper and promotional experience, as well as his connections with writers across the country, saw the advantage of getting the press, other prominent individuals, and ex-players out to the games. It would only help the image of the league. Over his entire time as President, Carr made sure the press would be taken care of, even if it meant that he would accompany these “courtesy” passes. Carr would not only give free passes to games but he would make sure they were the best seats in the house. Columbus Citizen-Journal writer Lew Byrer once asked Carr why he would give up a good seat for free? Carr would respond:

“The usual thing is to give a pass-holder a seat right in of a post. That doesn’t make sense to me. If I give a man a because I want his good will. I’d turn down his pass request in the first place. Why, then risk losing the you’re trying to get by giving the man poor seats.?”

Over his 18 years as NFL President (1921-1939) Carr would send sportswriters, ex-players and special guests courtesy passes to get into NFL games. He even sent a pass to the White House. This letter received by Carr, was written by White House Secretary M.A. , of Franklin D. Roosevelt’s office, from Hyde Park, N.Y. Carr’s office in Columbus, Ohio. Dated September 6, 1935, LeHand acknowledges the NFL pass to the President.

“The President has asked me to assure you of his appreciation of the kindly thought which prompted the officers and members of the National Football League to send the enclosed courtesy card to him.”
Other letters like this one to Link Lyman, former Bears lineman and future Hall of Famer who was an assistant coach at the University of Nebraska, and Frank Nied, who was the original owner of the Akron Pros who won the league’s first ever championship in 1920, helped give the NFL more publicity- and fans to the games- than before. 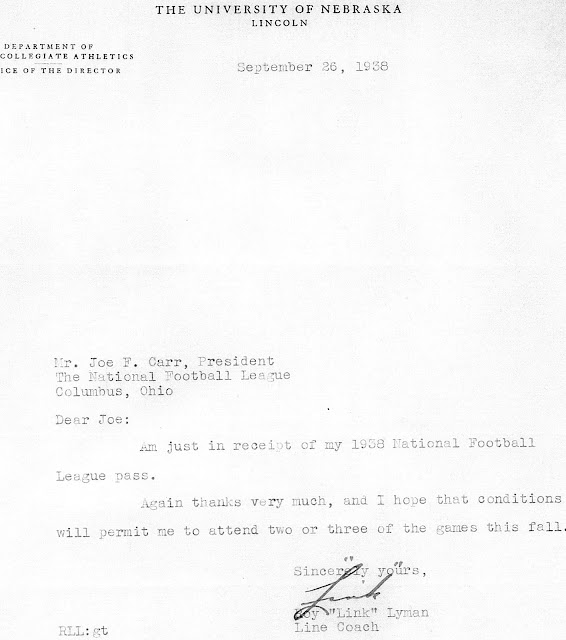 As the NFL was itself during the first decade of existence Carr also dealt with the instability of franchises. From 1921-1930 the NFL saw 48 different NFL franchises (in 38 different cities). But as the NFL was gaining its foundation, built by Carr and the NFL owners, attendance figures would show a steady growth over those ten years.

Attendance Figures (1921-1930)
All the attendance figures below were taken actual newspaper accounts the local press and it shows that as the decade moved on more attention was given to reporting attendance figures. Although some writers embellished the numbers of fans in their articles this is the only source we have to gauge these figures. The NFL didn’t keep official attendance figures during the early years. Also, in the second chart the average attendance per NFL game showed a steady increase in fans attending NFL games, for the big spike in 1925 with the arrival of Red Grange and a small deduction in 1930 a year after the stock market crash. From 1924 to 1930 the NFL almost doubled its average per game- with 1924 having seven more games played.

When Carr passed away in office from a heart attack on May 20, 1939, the NFL that fall crossed over 1 million paid fans for the first time. The NFL 20,000 fans per game. The former newspaper man from Columbus put his expertise to good use in getting sportswriters and special guests out to NFL games, building a foundation that would help the NFL become the country’s number one sport.