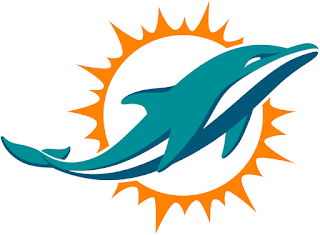 We at Pro Football Journal are trying to pick the best individual seasons in the history of each franchise, which we will continue today with the Dolphins franchise. By "Career-year" we mean the best performances at each position, with the following rule: Only one season per player per position. For example, here, we cannot pick Dan Marino's best two seasons and use both QB slots. 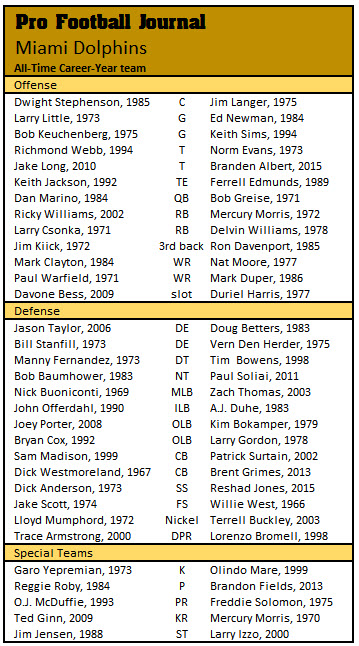 Starting from the top, we went with Dwight Stephenson's 1985 where he seemingly won every award there is. He was a  All-Pro plus was the NFLPA AFC Lineman of the Year, the NFL Alumni NFL Lineman of the Year, and Seagrams NFL Lineman of the Year (which was a  of assistant coaches).
Langer, on most teams, would be a lock for a First-team selection, but with Stephenson in the mix, perhaps the best center ever, he takes a back seat. Mike Pouncey,  2013, Tom Goode, 1969, and tough Tim Ruddy, 2000, are the honorable mentions. For Langer, we first went with 1973, but then realized that in 1974 and 1975 he was a unanimous All-Pro and in 1973 he wasn't. The Super Bowl season of 1973 contributed to our initial Paul Klatt, a member of the Pro Football Researcher's Association Awards committee changed our minds and we ended up going with 1975.
Larry Little was a consensus First-team All-Pro several times, we went with 1973 since the offense was better in 1973 than in 1972, the Perfect Season so we chose that season. Little was consistent and was an All-Decade selection as well.

ranks with Jerry Kramer as the best guards not in the Hall of Fame, and 1975 was a stellar season for him, though he had plenty of others. Richmond Webb was a 1990s All-Decade performer and in 1994 he was honored the most, protecting Marino's blind side. Jake Long was a consensus All-Pro in 2010.
Ed Newman backs up at one guard and Keith Sims at the other, both were underrated performers. Brandon Albert had a fine season in 2015 allowing only four sacks and was not called for holding.
Norm Evans felt 1973 was his best year when he was a Pro Bowler, they won the Super Bowl and he said he felt strong all year, never got nicked, even after the Pro Bowl. He said he could have played a few more games. Wayne Moore, 1973, is an honorable mention at tackle. He was a Pro Bowl fill-in and was a good left tackle for several years. Eric Laakso was a Sporting News All-Pro in 1983 and also gets honorable mention as well as his cohort Jon Giesler who was Second-team All-AFC in 1984 and 1986. We are going with 1984 as his honorable mention performance.
Keith Jackson, 1992, and Ferrell Edmunds, 1989, get the nods at tight end, though it is Randy McMichael, 2004, who has the "numbers". Jim Mandich in 1974 also is honorable mention along with McMichael.

Davone Bess, 2009, is the slot or 3rd receiver and  Harris, 1977 backs him up. Honorable mention goes to Wes Welker, 2006 as a slot. Harris, for some reason, always seemed to come up with a big play in a key situation. He only started when Nat Moore or Freddie Soloman were nicked, but he played often as a slot receiver when both were healthy.
Big backs Ricky Williams and Larry Csonka are the top running backs with Mercury Morris and Delvin Williams the . Williams had the biggest rushing season and Zonk was the All-Pro fullback from 1971-73. Delvin Williams arrived in Miami from the 49ers and promptly has a 1200-yard season. Williams was made expendable in San Francisco due to the 49ers giving up a King's for O.J. Simpson in 1978.

For the Dolphins we added a 3rd back, Jim Kiick, would replace Zonk or Morris in passing situations and catch passes. Davenport was a touchdown maker, a short-yardage specialist like Ottis Anderson was for the Giants in 1988 or Tony Baker for the Rams in 1973, among others. Tony Nathan was also a good 3rd down specialist in 1980 and 1986, in between he was a starter, but we give the honorable mention to 1986.
Marino gets top spot for his 1984 MVP performance and we went with Griese's 1971 NEA MVP season over 1973. He did more with less in 1971.
Jumping to the defensive side of the ball there were several great candidates at defensive end, so good, in fact, Cameron Wake, 2012, had to settle for honorable mention. Other HMs are Adewale Ogunleye, 2003 (62 sacks) and Jeff Cross, 1990 (10 sacks)

First-team selections are Jason Taylor and Bill Stanfill. Taylor's 2006 edges out 2002 and 2000.  In 2002 he had 18.5 in 2006 he was the NFL Defensive Player of the Year and forced nine fumbles to go with his  65 tackles and 13.5 sacks. That season he was listed by the Dolphins as an OE" or open end, which was a hybrid position of outside linebacker and defensive end, so he spent plenty of time in a two-point stand, but for all intents and purposes, he was a defensive end, usually away from the tight end. But, for purists, we could go with 2002 just as well when he had 18.5 sacks and seven forced fumbles to go with 69 tackles.
1973 likely just as good as Dick Anderson's 1973 DPOY campaign. Anderson had pick 6's in a Monday Night Football showdown with the Steelers and that carried a lot of weight in our view. But Stanfill had, at least, an equally season. He had 65 tackles (10 were ) and had 18½ sacks and four forced fumbles and was a consensus All-Pro.

Doug Betters was the AP Defensive Player of the Year in 1983, and we still put it behind Stanfill's 1973. Betters had 16 sacks, 76 tackles (8 were ) passes and a forced fumble.  For the other Second-team Vern Den Herder's 1975 campaign edges Cameron Wake's 2012. Den Herder was a great run defender and in 1975 he had 84 tackles and 11 sacks. Wake had 53 and 15 sacks and three forced fumbles in his best season. Den Herder was also named to Paul Zimmerman's New York Post All-Pro team, which carries weight with us.
Manny Fernandez, 1973, gets the nod over 1970 and 1972. He had 48 tackles, 6½ sacks, and a marvelous post-season ending with eight tackles and a sack in the Super Bowl where he could have been named the MVP.  He also won an obscure "Unsung Hero of the NFL" award in 1973. We are not 100% sure of the meaning of the award, but it has to be a good thing, right?
Bob Baumhower, 1983, was his best season being All-Pro and eight sacks, though he was so consistent, a few other years would qualify, 1981 being one when he had a career-high nine sacks.
What we love about the Second-team selections, Tim Bowens, 1998,  Paul Soliai, 2011, is that they had zero sacks, between them. were both Pro Bowlers and supreme run-stuffersVonnie Holliday, 2006, and Randy Starks, 2012, Brian Sochia, 1988, as a nose tackle, are honorable mentions.

The classic "SAM" backer was Kim Bokamper, 1979, and Larry Gordon, 1978, who was good at coverage. battled tight ends like Dave Casper, Russ Francis, and was voted to and was Proscout Inc.'s top in 1979 and he had 64 tackles and 5 sacks.
Sam Madison, 1999, and Dick Westmoreland, 1967 are the First-team corners. Westmorland led the AFL with 10 picks and Madison was a consensus All-Pro. With tough competition Patrick Surtain, 2002, and Brent Grimes, 2013 are relegated to Second-team. Terrell Buckley, 1998 (8 ), Curtis Johnson, 1973, and Jimmy Warren's 1966 season are the honorable mentions.

Dick Anderson, 1973, Jake Scott, 1974 followed by Reshad Jones, 2015 Willie West, 1966, HM is Louis Oliver, 1992 Anderson was the 1973 NFL Defensive Player of the Year and Scott was All-Pro in 1974 and had a career-high eight interceptions. Jones was a PFJ All-Pro selection. Willie West got Second-team All-AFL honors and led the Dolphins with 118 tackles and eight interceptions and was voted the AFL All-Star game in 1966 and for those reasons he's the Second-team free safety here.

The nickel back is Lloyd Mumphord, 1972 and Terrell Buckley, 2003. was one of the first regular in NFL history. When the Dolphins used or even the 53  he was in the game and he intercepted four passes and one went for a pick-six. In that era, teams didn't go to three wide receivers very often, so few players got a lot of snaps as a nickel back. However, the Dolphins, who would build up leads, would put opponents in must-pass situations and had to employ an extra receiver. That is what going 14-0 will do.

Garo Yepremian, 1973. He was All-Pro and the NFL's top kicker and was also All-Pro in 1971. Between Olindo Mare, 1999, and Pete Stoyanovich, 1992, it was a  for the Second- we went with Mare and Stoyanovich gets the honorable mention.
Reggie Roby, 1984, was a no-brainer and Brandon Fields, 2013, is the backup. Roby was exceptional booting punts high and having a hang time that didn't allow many returns.

O.J. McDuffie, 1993, and Freddie Solomon, 1975 are one-two as punt returners. McDuffie had 2 TDs in 1993 and while Soloman was a great returner, but it was hard to get publicity when Rick Upchurch and Billy White Shoes Johnson were in the same conference. gets a Second-team nod for his 1977 performance.

Jim "Crash" Jensen, 1988, was voted NFL Alumni Special Teams Player of the Year and it edged his own 1989 season. Larry Izzo, 2000, was great with Dolphins before he assumed the same role as a  with the Patriots. , who is the First-team nickel back is an honorable mention special teams for his 1972 season and was the Dolphins special teams MVP that season. He led in special teams tackles and blocked two kicks (he also blocked two kicks in 1970 and 1971). Reyna Thompson, 1986, is another honorable mention for special teams play with his 27 tackles and two forced fumbles.

Agree? Disagree? Post in the comments section below.
Posted by John Turney at 5:23 PM