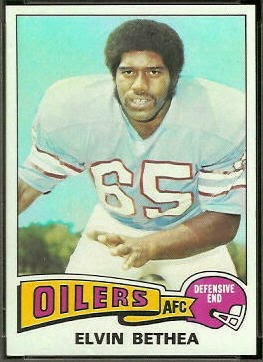 Often at Pro Football Journal we like to review the post-season honors players received and with perfect 20/20 hindsight make suggestions as to possible oversights and omissions.

One example is the 1979 Pro Bowl selections for in the AFC. The players voted the game were Fred Dean, LC Greenwood, and Elvin Bethea. Dean and Bethea are Hall of Famers and Greenwood is a many-time finalist. Sacks did not become official until 1982 but in 1979 they were kept by game statisticians and most teams tallied them in their weekly press releases, along with tackles, forced fumbles, and other individual defensive statistics.

In the NFC the choices were fairly easy. Lee Roy Selmon was the NFL Defensive Player of the Year and Jack Youngblood and Bubba Baker were two of the top in the NFL. was injured in the 1979 NFC Championship game and was replaced by Harvey Martin. Carl Hairston of the Eagles had 15 sacks and was thought to be a top alternate.

However, the AFC players didn't have the gaudy statistics of their NFL counterparts. Dean had nine sacks and Greenwood had seven. Bethea had one. Yes, one. Research has yielded some interesting details about that season and can perhaps offer a couple of choices that may have been better than Bethea and even Greenwood. Clearly, sacks are not the only measure of a defensive end, playing the run and being aware of action passes like screens and on occasion taking the second back out of the backfield in coverage. But, from the Deacon Jones era to the present, sacks are a representation of the major job a defensive end has. To paraphrase Hall of Fame coach George Allen, "If a defensive lineman cannot rush the passer, he's stealing".

Starting in the late-1960s the designated pass rusher was starting to show up in NFL games, a player who played primarily on likely passing situations. However, none had ever received post-season honors such and being named All-Pro or voted to the Pro Bowl until 1981, when Fred Dean was so honored with both and more. Bethea was a worthy Hall of Famer, but 1979 was not one of his better seasons.

Rookie designated pass rusher Jesse Baker got the lion's share of sacks and led the AFC with 15½, about the number of Dean and Greenwood combined. However, being a rookie and not being an every-down player (he did spell Bethea some at right defensive end in the base defense) he was not voted for any post-season honors other than being voted to various All-Rookie teams so it's understandable how he was overlooked.

Also overlooked, for likely the same reasons, was Tony "Mac the Sack" McGee, who totaled 11½ sacks The same is likely true for Tony "Mack the Sack" McGee, who, from 1974 through 1983 was a consistent nickel rusher for the Patriots and Redskins. The same goes for Willie Jones, the Raiders replacement in the DPR role previously held by Pat Toomey, with his ten sacks.

As for the players who were starters the best candidates for the Pro Bowl who were overlooked were Art Still and Vern Den Herder. Den Herder a nine-year vet had nine sacks as the Dolphins surged after a few down years. Still was chosen by Sports Illustrated's Paul Zimmerman for his All-Pro team, citing consistent pressure and great ability to stop the run. Still, he had 8½ sacks but really began to show his ability the following year, 1980, when he totaled 14½ sacks and continued in his run-stopping dominance.

Bethea was hampered by some injuries, but played through them and on occasion played defensive tackle while Baker played right defensive end in the Oiler pass-rush .

So, in this looking back installment, the best choices for 1979 AFC defensive ends would be Dean, who played very well on a very good Chargers defense, Still, an up-and-comer, and then a pick ': Den Herder or Greenwood. Both veterans with good moves, but coming to the end of their careers.
Career stats: 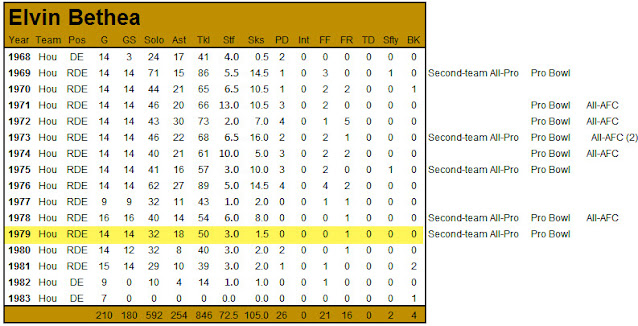