Aaron Donald, On The Rise?

LOOKING AHEAD
John Turney
(Statistics in Chart 1 updated Nov 2016 for equal comparison)
In 2014 Aaron Donald, the St. Louis Rams defensive tackle, had a tremendous rookie season, culminating in his being voted the NFL's Defensive Rookie of the Year. In the 2014 NFL draft, Donald was considered as a classic 3- due to the fact shorter/smaller defensive tackle, about 6-1, and weighing around 285 pounds, with exceptional quickness. He was compared to past  stars like John Randle or current Bengal Geno Atkins. The starting tackles for the Rams in 2012 and 2013 were two taller tackles, Michael Brockers and Kendall Langford and they played right defensive tackle and left defensive tackle, respectively. Depending on if the defensive front were an  or , each of those players would play a shade technique (1 technique on the shoulder of the center) or 3-technique (on the outside shoulder of the guard). Early in 2014, Donald caused a change in that arrangement.

Originally, Donald was reported to do the same as and Langford, spelling and playing either a left- or right tackle. The likely plan was for Donald left tackle and Brockers right; Rams head coach Jeff Fisher told reporters "Donald will play from tackle to tackle" meaning they Rams wouldn't change the scheme to suit Donald's purported skill set. However, after Donald's early-season impact all that changed.  wound up playing the shade technique and Donald, after earning the starting job, played the three-technique, switching sides if the Rams wanted to  or the line. And the results were Donald's stellar season as a classic 3-technique.

The media buzz so far in the 2015  concerning Donald, is that he's going to get better and better, that he can take the next step to being a First-team All-Pro or even a Defensive Player of the Year candidate. In that light, we wanted to take a look at a few similar-type players and how they did in their rookie season and in the next couple of seasons after that. By similar, we mean 3-techniques and/or shorter/smaller defensive tackles over the last few decades.
Donald had drawn comparisons to Gene Atkins, for example, and John Randle. There were others, as well, D'Marco Farr and William Dean Perry and a few others. Not all played the same schemes, some played the "flop" front, which is the tackles switching sides depending on the strength of the offense, others played a more traditional left- or right tackle. But all made varying impacts in the NFL in recent decades.

Here are the rookie season statistics for Donald and for those and others to get an idea of how excellent Donald's rookie season was and what kind of improvement might be on the way. In seeing the other , it's clear all of them improved from year one to years two and three.
This chart shows the rookie statistics of this selected group and how far ahead Donald was, in terms of playing time, production compared to the others.
First up is La'Roi Glover. Glover began his career with the Raiders and didn't get much playing time. Listed at 6-2, 285 pounds, he moved to the Saints and played mostly in passing first season there. seasons (1998 and 1999) he played mostly nose or shade technique.
In 2000 the Saints signed Norman Hand, a 330-pound free-agent who could the nose and handle the of the double teams and Glover played 3-technique and responded with an NFL-leading 17 sacks (or was it 16? More on that in an upcoming post, be we digress). Glover thrived in that system, but in 2002 he signed with he played both shade and three-technique and then nose when Dallas changed schemes to a 3-4. In 2006 Glover signed with the St. Louis Rams where he had two fairly productive seasons with the Rams and one not-so-productive season before retiring.

As can be seen the graphic below, it was Glover's third NFL season that he was a , every-down player, posting 10 sacks and 11.5 stuffs (tackle of for a loss).
Next up is the Rams-ever three-techniqueFarr was hugely  as a Washington Huskie, but fears about his height caused him passed up in the 1994 NFL draft and he signed as an undrafted free agent with the Rams.
In training camp in 1994, Farr battled a 1993 Rams draftee Ma'a Tanuvasa, another undersized defensive tackle for a spot on the Rams roster. At the end, Farr won the duel and logged some playing time. In 1995, Farr improved to the degree that the Rams moved Sean Gilbert, a 315- tackle to defensive end to get Farr on the field. He responded in the Rams "Jet" defense with 11.5 sacks, 7.5 stuffs and five forced fumbles and he gained notice as an up-and-coming star. In 1996 Farr was named to Sports Illustrated's All-pro team. The year the Rams won the Super Bowl, Farr played in his first Pro Bowl. In 2000 Farr battled knee injuries, which cut his career short. He attempted a comeback with   his knees wouldn't allow it.
Michael Dean Perry, at 6-1, 295 , is a bit unique in that he played both a 3-4 defense and a 4-3 defense early in his career. Noted for his small size (especially compared to his brother William "The Refridgerator" Perry) and exceptional quickness, Perry seemed like he was making a play or two in the backfield of the opponents every game. When Perry did lineup in a  , across from the center he liked to line up in a cocked like the Steel Curtain defensive tackles did in the mid-1970s. It proved effective as evidence from 1989-93 he averaged over 10 stuffs per season.
One player often compared to Aaron Donald, pre-2014 draft, was Bengals DT Geno Atkins. Again, a shorter, smaller quick tackle was an All-pro before he hurt a knee. But as can be seen, Donald was more productive than Atkins in his rookie year and has better hand use. For a young player, Donald has better hands and feet than any in recent memory, maybe ever. He can rip, swim, bull rush, and uses his hands tremendously in all those pass-rush techniques.

Another player compared to Donald was John Randle, who was listed at 6-1 and 290 pounds, a Hall of Famer who made his bones as a Minnesota Viking. Randle, like these other select players, wasn't productive as a rookie. Randle was likely the best pass rusher of this bunch, in terms of sacks and hurries and in 1990 he had 20 "stacks" (stuffs plus sacks). 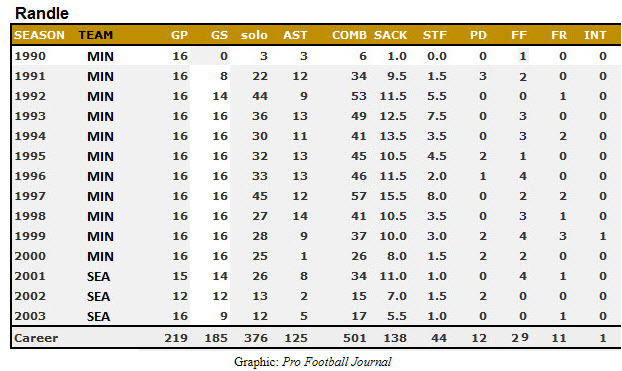 Warren came out of the University of Miami 6-2, 295 pounds, though some felt he was closer to 6-1, fell in the 1995 NFL draft and then held out, and his rookie season shows that perhaps the most talented 3-technique of this group , at times as a rookie. In his second season he improved and by his third season, he production that got him elected to the Hall of Fame.

The aforementioned Ma'a Tanuvasa 6-2, 270 pounds,  was a bit , in that he never was a star and even started as a DE in the Broncos base defense the seasons  won the Super Bowls, but his role was as a  type, inside rusher on passing downs.
Rod Coleman began his career in Oakland and was essentially a third-down rusher, as the Raiders usually had two large-type DTs in base defense, players like Darrell Russell and Grady Jackson et al. Coleman was 6-2, 285 and had the quickness of a Glover or Farr and came in on passing downs until 2003 when he became a starter. He had several  seasons as a 3-technique type.

Certainly, time will tell, but Donald is indeed off to a fast start and could set all sorts of records in time.  Not only setting records in time but he could end up being the best defensive player in the NFL at some point in his career and even break the sack record for defensive tackles, which is 18 (Alan Page and Keith Millard). He's that good.
Posted by John Turney at 2:06 PM