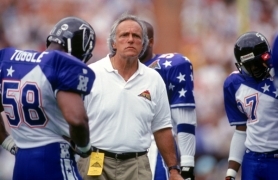 It seems that after 1998 you couldn't watch a Dallas Cowboys game on television without the announcers bringing up the fact that special teams coach Joe Avezzano was the only three-time winner of the NFL Special Teams Coach of the Year Award.

We'd search high and low for a complete list and who gave the award out. We learned that it was based on a poll of other NFl special teams coaches and was awarded by Professional Kicking Services which was a business that specialized in football camps, especially kicking camps.

They would have an awards dinner every year and invite the winning coach to Sparks, NV, to accept the award and give a speech. It not longer is in operation and in 2010 it didn't give out the award. However, it was always interesting to see who won each year, as some teams would feature the winner in media guides, other teams never seemed to know their special team coach won the award, based on their bios in media guides.

Brad Seeley joined Avezzano as a three-time winner in 2011. Eventually, we will try and get a complete list of the Dallas Morning News Special Team Coach of the Year awards, which were chosen by Rick Gosselin and was based on his excellent tallying of complete special teams play annually in that paper. However, we have not complied that list as of yet (little help researchers?). 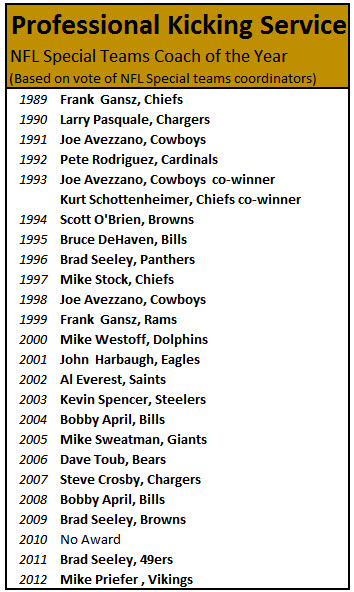