LOOKING BACK
By Chris Willis, NFL Films
Today PFJ looks back at a football book written by one of the NFL’s best kickers and all-around players, Ken Strong. Big and athletic, the 6-0, 206-pound Strong played 12 seasons (131 games) in the NFL for two teams, the Staten Island Stepletons and the New York Giants. He also played two seasons in the rival AFL (1936-1937) with the New York Yanks. After retiring briefly (1940-43), he came back to play for the Giants, mainly as a kicker, until 1947. “(Strong) was not only a great power runner with speed, but he was an excellent defensive halfback…after Ken’s defensive days with the Giants ended, he became the Giants’ all-around kicker. He was recognized as the greatest kicker of his era,” said Mel Hein, former Giants Hall of Fame center and teammate.

Strong was a great athlete, strong runner, solid receiver, could return kicks, and was a great defensive player. He was a member of 1934 Giants team that won the NFL Championship that season. In the Championship Game, he played a huge part in the Giants’ comeback to win the “Sneakers Game” against the undefeated Bears, 30-13. In the game he rushed 9 times for 94-yards and 2 TDs, he also had 2 catches for 17-yards, kicked 1 FG and 2 XPs—accounting for 17 of the Giants 30 points. In two other NFL Championship Games he scored TDs (1933 vs Bears, lost, 23-21; and 1935 a 42-yd. TD catch vs Lions, lost 26-7).

After he retired Ken Strong decided to write a football book on kicking. He teamed up with Emil Brodbeck a freelance writer who had written articles for Good Housekeeping and Boys’ Life and would write a best-selling book titled The Handbook of Basic Motion Picture Techniques. The two would author Football Kicking Techniques: A Player’s Guide to Better Punting, Place kicking and drop kicking. 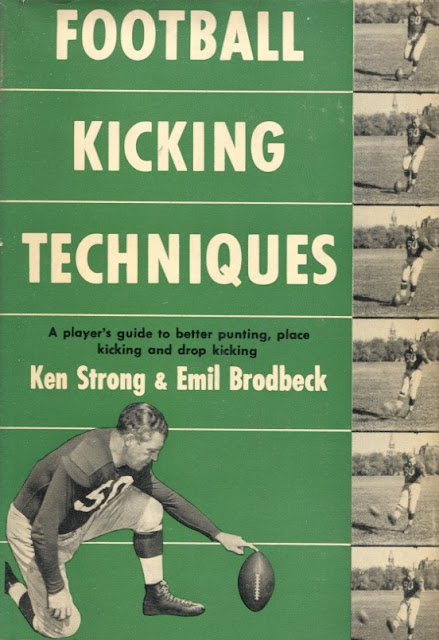 Published in 1950 by McGraw-Hill Book Company (New York) the book was 133 total pages with 68 pictures. The Forward was written by the dean of sportswriters, Grantland Rice. “In view of the book and film they have produced Strong and Brodbeck have my vote for an All-American team in teaching the real know-how of football kicking…He has proved his ability to write and teach (Brodbeck). Together, Strong and Brodbeck are a power-packed team of kicking instruction.”

The book consists of three parts and 13 chapters.

Part One: Grounding the Kicker

Chapter 6- Kicking Action with the Legs 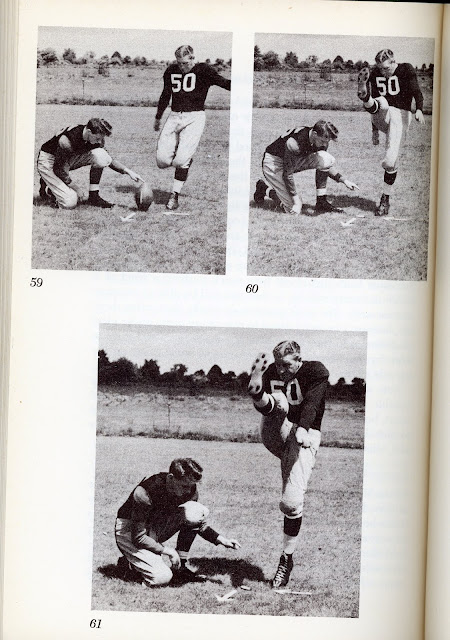 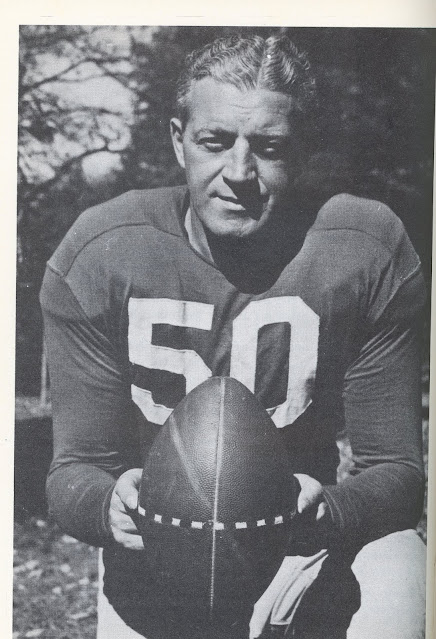 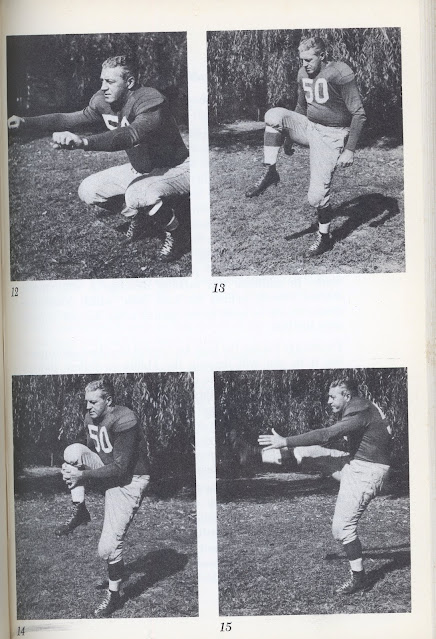 Strong goes into great detail on the techniques of kicking, punting, and drop-kicking. The pictures enhance the readers knowledge of the football skill. Some of the photos include Strong’s son, Ken Strong, Jr. The demonstrations with father and son made this an enjoyable experience for the Football Hall of Famer. Strong wrote:

“Never underestimate the importance of the foot in football. One of the most vital advantages of a well-rounded, reliable, effective kicking offense and defense is the extra threat, the added flexibility it gives you. You can use your kicking power to set up other plays. The other team never knows what is coming next. It gives an opponent the jitters if you kick on first, second, or third down. He never knows whether a punt is going to rise out of a regular formation or a run or pass is going to come out of a punt formation. You’ve got him guessing, and, in football, surprise is at least 80 per cent of the battle.” 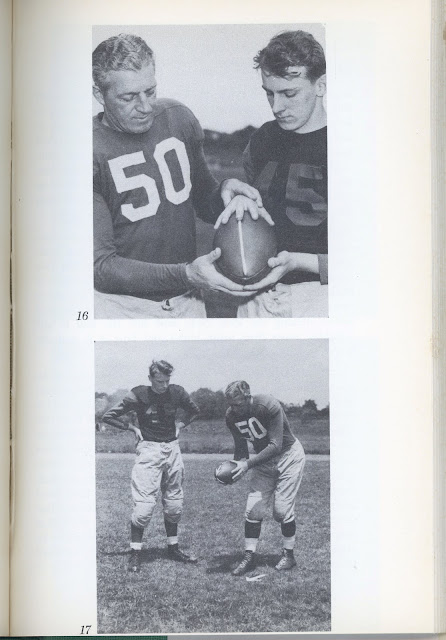 The author, Emil Brodbeck, also appears in a few photos. Reviews were generally positive. Jimmy Powers of the New York Daily News wrote in his column:

“Ken Strong has written a wonderful book, “Football Kicking Techniques.” If more youngsters read it, we will see less sandlot football between highly touted, big time college elevens, where kickers, off balance, boot the ball too high, too short or directly at the enemy receivers.”

“Not to make this a book review column, but here’s just a little note about an interesting book that’s just reached the box. It’s ‘Football Kicking Techniques’ by Ken Strong, perhaps the most famous kicker of all time, and Emil Brodbeck…it’s easy to understand, profusely illustrated and should be interesting to the young gridder. It’s put out by McGraw-Hill publishers and goes for three bucks. That’s quite a wad of dough but anyone who wants to glimpse the book is welcome to drop up to the Trib sports department.”

Ken Strong’s book is worth the read, even 72 years after it was published. 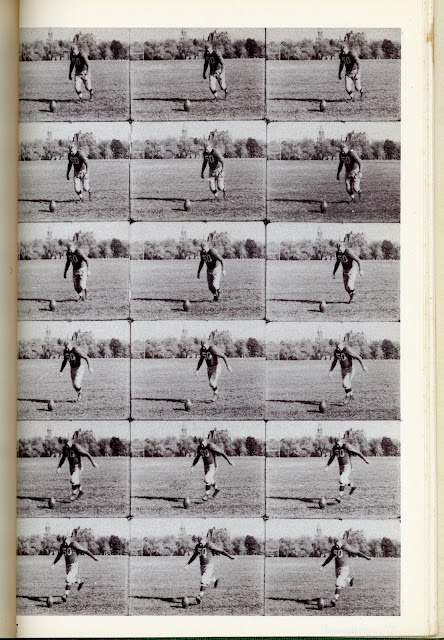 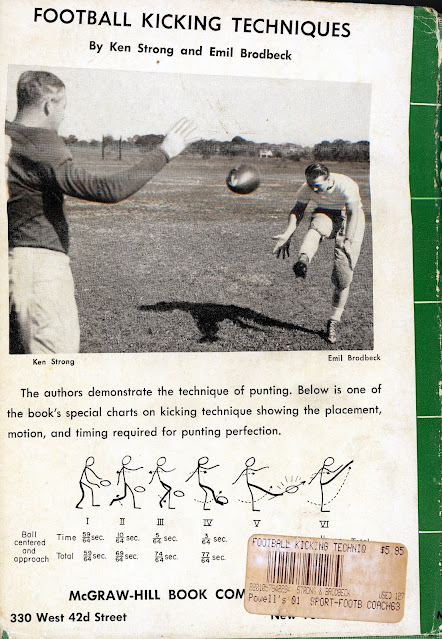