AFL Defensive Players of the Week – 1966 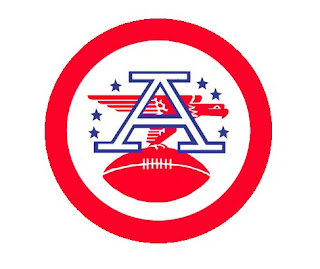 Oakland’s star defensive back Dave Grayson started the season off in fine fashion against the newly minted Miami Dolphins—making their regular-season debut—picking off two passes in the Raiders’ 23-14 victory. Grayson—coming off back-to-back All-AFL seasons—also broke up two passes in the win. 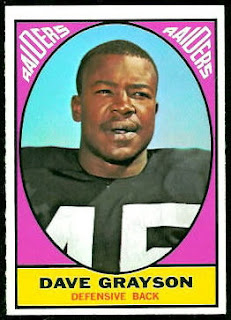 Defensive Player of the Week honors for Week 2 go to New York defensive end Verlon Biggs for his outstanding play in the Jets’ narrow 19-14 win over the Dolphins in the Orange Bowl.  The six-foot, four-inch, 275- pound alumnus of Jackson State recorded two-and-a-half sacks, including one in which he took down Miami quarterback Rick Norton in the end zone for a safety.  Biggs spearheaded a smothering defense that held the Dolphins to a meager 111 yards of total offense. 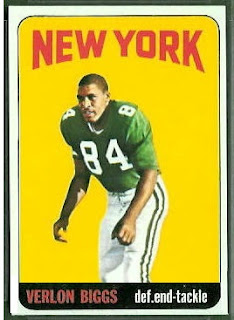 A matchup of winless teams as the 0-1 Boston Patriots invade Denver’s Bears Stadium to face the 0-1 Broncos. Led by fireplug defensive tackle Jim Lee Hunt (carrying 255 pounds on his five-foot, eleven-inch frame), the Patriots held the Broncos offense to just 173 total yards in notching a 24-10 win.  Hunt was seemingly everywhere in this one, recording seven tackles including three quarterback sacks (two solo and two half sacks), and one batted pass. 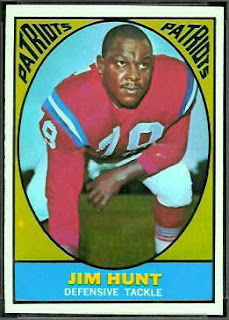 The always-tough Oilers came into Buffalo at 2-1, giving them a one-game advantage over the Bills in the early race for the Eastern Division lead.  The Bills were coming off their first win of the season, having stomped the new Miami Dolphins by a 58-24 score the previous week. By the midway point of the fourth quarter of this game, however, Buffalo fans were beginning to wonder if the Miami game was nothing more than an anomaly and the Bills’ glory days were finally over.  But safetyman Hagood Clarke put those notions to rest with the score tied 20-20 late in the final frame.  With the Oilers marching toward the go-ahead score, Clarke stepped in front of a George Blanda pass at the Bills’ 34 and raced 66 yards to give the Bills a seven-point bulge with just 27 left.  The Oilers had one more possession after the kickoff, but Clarke blunted that drive as well by nabbing another Blanda throw.  The Bills then ran out the clock and retired to the locker room with a memorable 27-20 victory. 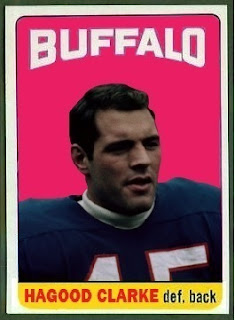 Boston cornerback Tom Hennessey is awarded this week’s DPOW honor for his efforts in the Patriots’ 24-24 tie with the Jets at Fenway Park.  Hennessey nabbed two of Broadway Joe’s throws, returning them for a total of 60 yards.  The Holy Cross alum contributed five tackles, including three solo, to the Patriots’ cause. 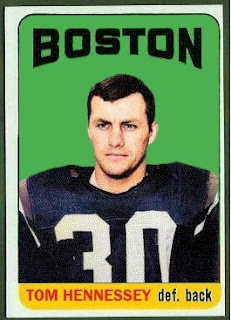 On a balmy 61-degree Saturday fall evening in Buffalo, the struggling Boston Patriots (1-2-1) invaded War Memorial Stadium to face the defending AFL champion Bills, sitting in their accustomed spot atop the East division at 3-2.  The Pats were bound to get untracked at some point, and this was the night.  Led by All-AFL middle linebacker Nick Buoniconti’s 10 solo tackles, the Patriots pulled to within a game of the Bills with a 20-10 upset victory.  Buoniconti also recovered a fumble recovery that allowed the Pats to go into the locker room with a 13-0 halftime lead.

The Miami Dolphins made history in winning their first regular-season game by embarrassing the lowly Denver Broncos (1-4) with a 24-7 drubbing in the Orange Bowl.  The Miami defense, led by veteran cornerback Dick Westmoreland, held the Broncos to a paltry 118 yards of total offense.  The six-foot, one-inch, 190-pounder pinched two John McCormick passes, returning them for a total of 61 yards. 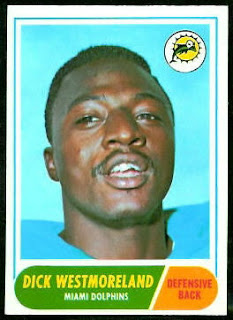 Make it back-to-back Defensive Player-of-the-Week honors for the Dolphins’ secondary as Miami cornerback Willie West takes a turn in leading the boys in aqua and orange to a stunning 20-13 win over the Oilers at Houston.  West pilfered three George Blanda passes, including picks on both of Houston’s final two drives in the fourth quarter, to seal the victory and give the Dolphins their first two-game win streak and improve to 2-5 on the season. 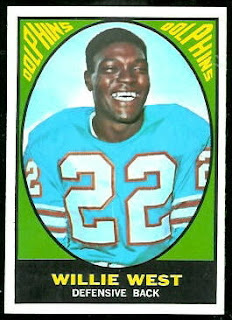 For the second straight game, the Houston Oilers were victimized by a Defensive Player of the Week honoree.  This time it was Kansas City’s All-World safety Johnny Robinson, who accounted for eight tackles (four solo) and two interceptions in the Chiefs’ 48-23 defeat of the Oilers at Municipal Stadium.

The win allowed the Chiefs, at 6-2, to stay a half-game ahead of the San Diego Chargers (5-2-1) in the Western Division race. 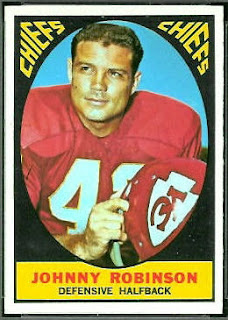 The race in the West was very close, with the 6-2 Chiefs just a half-game ahead of second-place San Diego (5-2-1).  The outcome of this game could either flip the standings, or more the Chiefs up by a game and a half.  Kansas City defensive back Willie Mitchell was determined the Chiefs were not yielding the division.  The third-year man out of Tennessee State was all over the field, recording four tackles (three solo), batting down four enemy aerials, and picking off a Joh Hadl pass late in the fourth.  The interception came while the Chargers were on a desperate drive toward a touchdown that could have closed the gap to three points.  Instead, the Chiefs held on for a 24-14 triumph and a 1½-game bulge in the West. 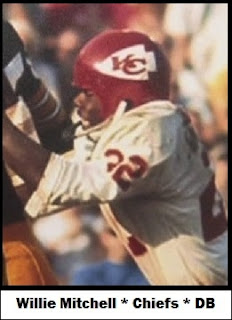 Buffalo’s massive defensive tackle Jim Dunaway (six-foot, four-inches and 285 pounds) wins this week’s honors for his heroics in leading the Bills to a comeback win over the Jets at War Memorial Stadium.  Dunaway had just two solos tackles (though one was for a sack) but made the play that changed the game’s momentum in Buffalo’s favor while providing the go-ahead points.  With the Bills trailing 3-0 early in the fourth quarter, the Jets prepared to kick a 38-yard field goal to extend their lead to six points.  Dunaway, however, broke through the New York line and blocked Jim Turner’s kick, then scooped up the bounding ball and returned it 72 yards for the touchdown, giving the Bills a 7-3 lead.  The Bills added another score to make the final 14-3, and the Ole Miss alum became forever known as “Runaway Dunaway.” 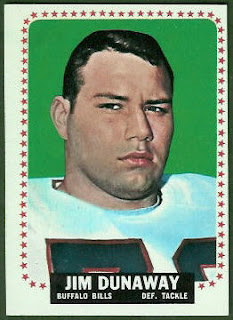 This was a must-win week for Buffalo, who traveled to Houston’s Rice Stadium with a razor thin lead in the division race with the Patriots (6-3-1 to 5-3-1). Cornerback Tom Janik picked off two passes, including one he returned 34 yards for a score as the Bills rolled to a 42-20 over the Oilers.

The win increased the Bills’ lead over Boston to a game and a half as the Patriots ended their game with Chiefs in a 27-27 tie. 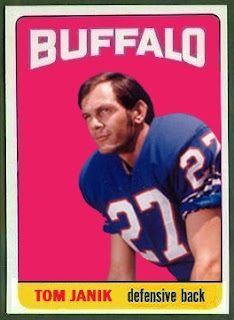 The traditional bottom-feeding Denver Broncos were in their familiar position outside looking in as the season entered the home stretch.  Playing for pride, and the chance to play spoiler, the 2-8 Broncos hosted the still hopeful San Diego Chargers, who at 5-4-1 needed to win out if they were to have any chance of catching up to the division-leading Chiefs (8-2-1).  Journeyman defensive end Dan LaRose, who had seen action with the NFL Detroit Lions, Pittsburgh Steelers and San Francisco 49ers in five previous pro seasons, led the Broncos’ defense with seven tackles (6 solo), one-and-a-half sacks, and two passes batted down at the line of scrimmage.

The 20-17 final ended the any titular aspirations held by the Chargers who fell to 5-5-2 while the Chiefs defeated the Jets to improve to 9-2-1 and claim the Western title. 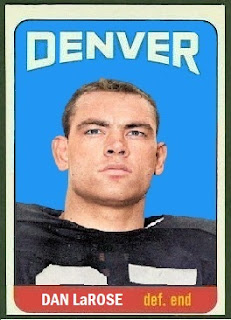 The Boston Patriots came into this crucial matchup trailing by two games to the division rival Buffalo Bills.  Mike Holovak’s crew (6-3-1) needed a victory to stay alive in the race for the playoffs with the division-leading Bills (8-3-1).  But Boston defensive tackle Jim Lee Hunt earned his second DPOW honor this season by registering three sacks, including a strip-sack and fumble recovery late in the game to seal a 14-3 victory at Fenway Park. 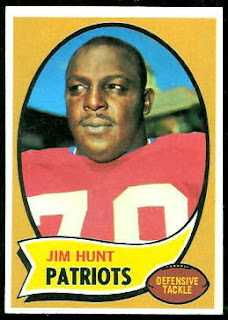 The Kansas City Chiefs at 11-2-1 already had the Western pennant sewn up coming into this game at Miami’s Orange Bowl, but the 2-10 Dolphins seemed intent on making a statement.  However, behind a stellar defensive performance by safety Johnny Robinson and late scoring drive engineered by Len Dawson, the Chiefs managed to eke out a 19-18 nailbiter.  As usual, Robinson was spectacular, registering 10 tackles (nine solo), an interception and a fumble recovery to capture his second DPOW accolade of 1966. 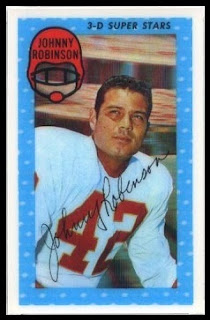 The Buffalo Bills came into the final week of the season tied with Boston for the East Division lead at 8-4-1.  Unfortunately for the Pats, they had to travel to New York to take on the rising New York Jets at Shea Stadium, while the Bills had the advantage of hosting the sad-sack Denver Broncos.  The Patriots blew their shot, however, coming out on the short end of a 38-28 final.  The Bills, playing before a hearty crowd 40,583 at War Memorial Stadium, did what they had to do by defeating the Broncos, 38-21, in a game that was never in doubt.  Defensive back Tom Janik earned his second DPOW honor of the campaign by picking off a pair of John McCormick passes, including one in the third quarter he returned 25 yards for a touchdown.

The Bills finished 9-4-1 to win the division pennant and earn their third straight trip to the American Football league Championship game. 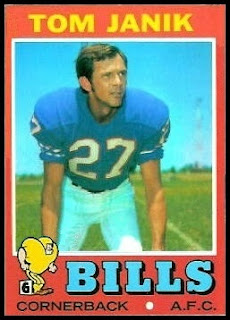