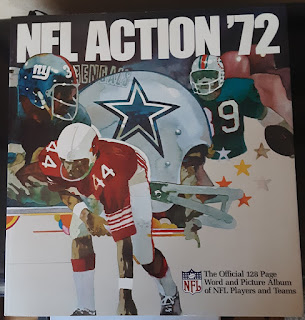 I was eleven years old in 1972, on the very cusp of the age range targeted by a promotional campaign sponsored by the combined forces of the National Football League and Dallas-based Sun Oil Company.  And though some readers might have been born too late to take part or remember the campaign, and still others might have been a bit too old to take part, the stamp collecting craze that ensued left an indelible imprint on thousands of football fans of my demographic group.

That fall, Sun Oil, better known as Sunoco to the average motorist of the day, introduced a promotion that had kids (as well as the occasional grown-up) endeavoring to accumulate the entire collection of 624 NFL player stamps and paste them into one of two collector books.  With each fill-up at the neighborhood Sunoco station, customers would receive a sealed pack of nine stamps, though sometimes an attendant could be cajoled into giving more.  The kid would hurriedly tear off the ends that sealed the pack to see which nine players he or she had just acquired.  Sometimes a pack contained several needed stamps, but as time passed and her or his collector book became more filled, the odds of finding needed stamps grew smaller. 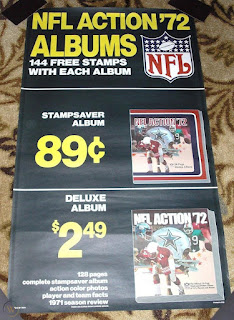 There were 26 teams in 1972, the third year since the AFL-NFL merger.  Each team was represented by 24 stamps, representing a full offensive squad of 12 players and a corresponding number on the defensive side.  The photography used was gorgeous, with bright colors and sharp graphics.  Most of the stamps depicted players in game action, though a few head shots were used.  What made this collection especially appealing was the fact that the team logos were clearly visible on the players’ helmets.  This was in stark contrast with the football cards issued by Topps at the time.  Since Topps had a licensing agreement was with the Players Association but not the league, the logos were hastily airbrushed from the photos. 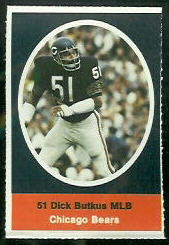 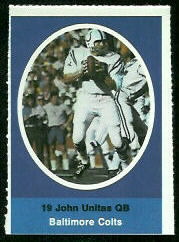 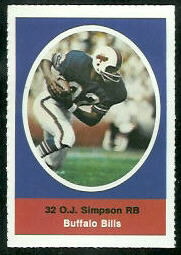 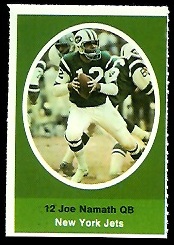 There was a classic commercial which featured Miami Dolphins head coach Don Shula, which is interesting in hindsight since the Dolphins’ historic undefeated season was that very same year. 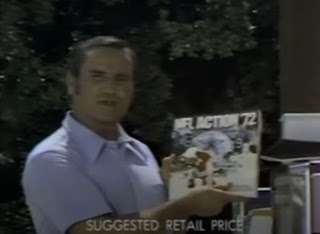 Two different books were available to collectors.  The first was the budget priced 56-page book for 89 cents, which contained a review of the previous year’s Super Bowl and stamp pages for every NFL team.  The deluxe version, at $2.49, was a lavish 128 pages with team histories and photos of each team’s notable players.  Each book came with six 24-stamp sheets (144 stamps) to get the collector started.  The rest of the collection would have to be acquired at the gas station or via trade with the kids’ friends.  Though it was important to gather the entire collection, there were many notable Only-Issues, Rookies and Hall of Famers, including Johnny Unitas, Joe Namath, O.J. Simpson, Alan Page, Bart Starr, Bob Lilly, Dick Butkus, Herb Adderley, and many more.  And where else is one going to find a (Saints CB) D’Artagnan Martin or (Oakland WR) Drew Buie card?  This was it! 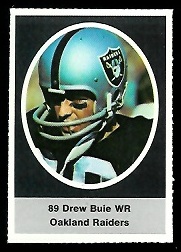 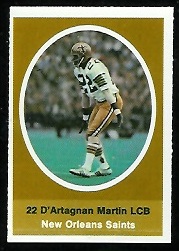 There was an 82-piece supplement to the original 624-stamp collection released later that fall.  It featured players who had been recently acquired, traded, whatever.  It's not exactly clear how these pieces were supposed to fit into the collector books, but they were available in short supply, and are now extremely hard to find. 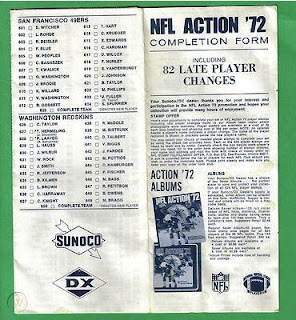 I still have my original book, along with a couple of others I picked up over the years.  They are pretty beat up, and only one is complete.  Every once in a while, I will be looking for something in my archive closet and come across them but have not spent much time looking at one in years.  That changed recently while I was looking for a book on eBay and a couple of these books came up on my feed.  Curiosity got the better of me and I ventured down the rabbit hole.  Sealed copies of the books were going for astronomical prices (in my opinion) but after thinking about it, I figured such copies must be extremely rare.  After all, where would somebody find them?  However, I came across a guy who actually had a few sealed deluxe versions for $35!  Not too hefty.  I do not know why, but my impulses got the better of me and I ordered one.  It arrived a week later.  It was sealed and, as a long-time vinyl record collector well aware of how much a sealed item depreciates after removing the shrink wrap, I decided to open it up and bask in its pristine glory.  I was glad I did!  This book really belongs in my vast football library.  What a great time capsule, on par with the “Football Stars of 1969” type books published by Pyramid Books and other houses back when I was a kid.  Plus, the photography was outstanding. 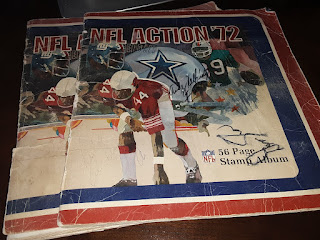 Two of my original stamp books.  Yeah, pretty beat up! 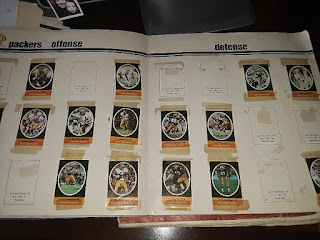 I clearly did a pretty poor job of attaching the stamps.
I am now thinking I would like to try to relive a childhood adventure and fill a clean book.  I have ordered another copy to keep sealed and will begin the journey of gathering untorn packets of stamps until I have completed the task.  This one will be filled neatly—stamps cleanly separated from each other and placed squarely into the book with no yellowing tape or wrinkling glue.  I will post updates of my progress.

I am also very interested to hear from others who collected these stamps as a kid.  Do you still have your books?  How far did you get in collecting the entire lot?