UNIFORMS
By John Turney
Last week the Cleveland Browns, in our view, drank the Nike Kool-Aid and "modernized" their uniforms. According to press accounts from the Akron Beacon Journal.com

"The Browns, NFL, and Nike s studied fans’ perception of the team’s image and brand" and the team owners and other brass were the point persons in the task. The press accounts stated that "The feedback they received indicated the majority of fans favored a switch to modern uniforms, provided the new gear would respect the team’s history."

Again, it was reported that "the Browns, the league and Nike aimed to strike a balance between the past and present,  and the team spent about a year reviewing different designs from Nike and they kept the iconic orange helmets. However, drastic changes were made to the jerseys and pants.

Again the uniforms, as they have been in recent years are the Nike Elite 51 uniform design and this time Nike says they "respect the past and embraces the future by paying tribute to the city and the fans".

But not only that "The Browns’ new uniform aesthetic enhances the team’s unique hallmarks, including color, font and stripe pattern. This modernized uniform design draws influence from Cleveland’s architectural evolution. The look captures the city’s industrial strength and celebrates its continued innovation through a bold increase in the size and scale of the uniform design elements."


"Key uniform design details include contrast stitching, Nike Chainmaille number application and oversized team branding. The use of contrast stitching is a first for any NFL team, and has been incorporated into the uniform to honor the working-class origins and industrial roots of the city. "

The oversized Nike Chainmaille numbers represent Cleveland pride and are also a NFL first as the Browns’ uniform presents the league’s largest wordmarks — specifically “CLEVELAND” at the front of the jersey and “BROWNS” on the side of the pant."


Karlos Dansby, a Browns top linebacker said, "They're hot. They're nice, real nice, man. I'm excited to get into them, they're cutting edge."

Browns hard-hitting safety Donte Whitner agreed, "I love them. I'd seen them a few weeks back and when you compare them to the old jerseys kind of look boring so we felt like it was time for a change and I like everything about these".

There was so much positivity in them, tackle Joe Thomas opined that "Honestly I have not heard anyone that has not liked the new uniforms. And usually, everyone has some beef".

The Akron Beacon Journal stated, based on these players' quotes that "The players don't envision the masses calling for another change in five years". 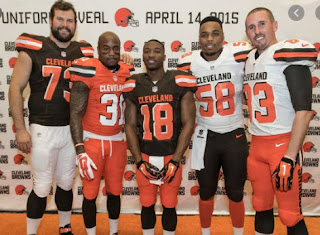 Well, our view is different that the players. Some teams need modern looks, some teams need to stay with classic looks. The Browns are in the latter category.

These uniforms are yet another Nike abomination. The name on the side of the pants and the front of the jersey is not the NFL, it is a high school or college or semi-pro look.

The only thing that is a good idea, though they failed in the execution is the drop shadow on the numbers. On a throwback, it would have been great. On an every-week uniform? No.

But, we could be wrong. Browns fans may love them and we will see them for a long time. We doubt it, we think they won't last, but hey, time will tell.