In 2014 Ben Roethlisberger, Le'Veon Bell, Brown  totaled 1148 touches of the football, twelve short of the all-rime record set by Peyton Manning, Edgerrin James and Marvin Harrison in 2000. For our purposes the total  passes and runs by the quarterback, runs and catches by the running back and plus any runs by the leading receiver.

Stats, LLC.  to publish yearly annuals with these totals, but not recently, therefore we've gone back and done the totals our way and updated it through 2014.

Manning and his cohorts have several places on those trios (including first all-time) who have reached  the 1000 mark in total touches, doing so with Edgerin James, Marshall Faulk as well with Denver in 2013. The Steelers  on a fine run in this category, only the suspension of Bell would keep them off this list in 2015.
The Rams were only 8-8 when  "Triple Threats Threds" had 1135 total touches in 2006. Drew Bledsoe, like Peyon Manning has several entries a couple of teams on this list. The mid-1990 Lions with Barry Sanders, Herman Moore with Scott Mitchell really put the ball into just a few hands and were in the playoffs a few times. Workhorse James Wilder and Steve DeBerg have their team from thirty years ago on this list, in the top 10. Manning and Bledsoe had several appearances on this "over-1000 touches list). The 1999 Rams missed this list, but rank very high in the years gained by a trio from that year, in 2000 an injury to Kurt Warner likely kept the off. But in 2001 they had exactly 1000 touches and also rank high in the total yards of a triplet or trio.

One of the bigger surprises is the early 2000s New Orleans Saints making this list three times with trigger man Aaron Brooks and receiver Joe Horn. Once was with running back Ricky Williams, the other two  with Duech McAlister. In 2010, Sam Bradford was a rookie, Amendola was essentially a rookie with steady Steven Jackson and took a team that had 6 wins from 2007-2009 to a respectable 7-9 record in 2010 and are 12th all-time in terms of trio touches. Also, in a 30-year old  (1984) performance Neil Lomax, Ottis Anderson and Roy Green gave a huge performance that also ranks high on the total yards by three players list.

The original "Triplets" Troy Aikman, Emmitt Smith and Michael Irvin appear twice on the list and Air Coryell with Fouts, Chuck Muncie and Kellen Winslow make an appearance, as of forerunners to the trio or triplet theory. 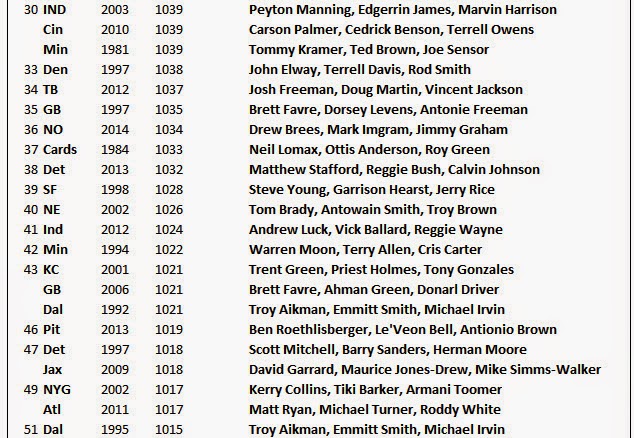