Johnny Unitas Student of the Game


Last month Pro Football Journal looked back at the career of Johnny Unitas. One additional article that was not included was one that Unitas helped write with Al Silverman of Sport magazine in 1959, titled "Block, Tackle and Think." 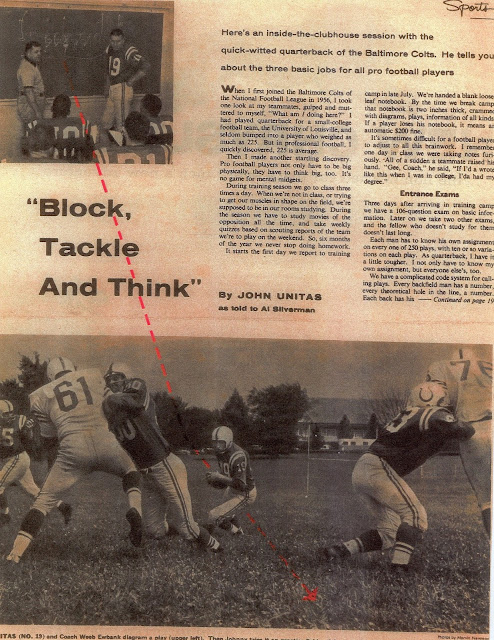 In the short two page article Unitas talk about the process of learning the playbook in training camp to preparing for regular season games in the classroom. During camp Unitas reveals he a two-inch thick binder from coach Weeb Ewbank that includes diagrams, plays and other special information. Losing a playbook would cost the player a $200 fine. Unitas talks about absorbing the playbook:

"Three days after arriving training camp we have a 106-question exam on basic informationeach man has to know his own assignment on every one of the 250 plays, with ten or so variations on each play. As , I have it a little tougher. I not only have to know my own assignment, but everyone else's too."

Number 19 then tells Silverman about the regular season routine he goes through to learn the game plans for the upcoming opponent.

"I call maybe 50 or 55 percent of the plays from the line of scrimmage after I've seen how the defenses are lined upDuring the game we get to run off about 60 or 70 plays. use only about 25 different ones. Plays are chosen by the coaches and quarterbacks using films and scouting reports. They break down to the best plays to use against the enemy's particular defense."

Watching game film was a big part of Unitas's preparation for games. He would watch game film of his next opponent on Wednesday morning with the coaches. Then he would take film home and watch for two hours each night the rest of the week to get a better understanding of the defense he would be facing. 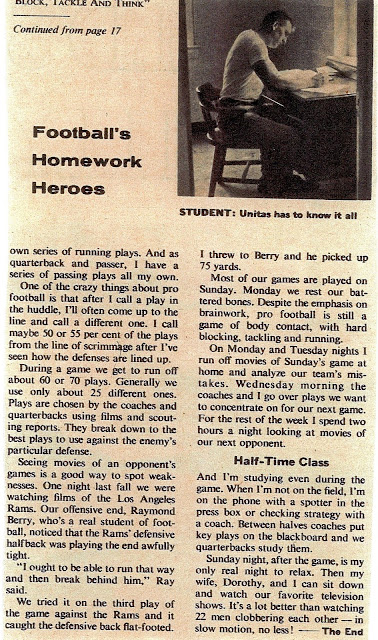 All of this preparation would make of the greatest quarterbacks to ever play the game. And when the week was over he would spend Sunday night with his wife away from football.

"Sunday night after the game, is my one real night to relax. Then my wife, Dorothy, and I can sit down and watch our favorite television shows. It's a lot better than watching 22 men clobbering each other- in slow motion, no less!"

What would Unitas have watched on TV on Sunday night in 1959. His choices would've been:

My guess would be Maverick, followed by the Ed Sullivan Show. 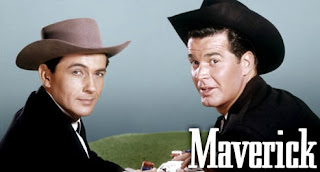