LOOKING BACK
By TJ TROUP
Every team has a history of running the ball. The best of all-time you ask? The Pirates/Steelers have had the most 100 yard rushers in league history, and the highest winning percentage in those games at  83%.

We can all visualize those storied runners in Black & Gold pounding away at defenses and coming away with a victory. The one team that has stonewalled Pittsburgh is the Eagles in what once was a strong intrastate rivalry.

This saga begins with todays date; June 8th which would be my father's 92nd birthday. He served our country as a waist gunner a B-24 bomber (flew 26 successful missions over Europe). Today is also Byron "Whizzer" White's birthday. Byron joined the Pirates in 1938 and led the league in rushing.

On November 20, 1938 in Charleston, WV the Whizzer gained 133 yards on 11 carries, and scored on a 79 yard run. The Pirates lost that day to the Eagles. The distinguished Mr. White went on to serve our country as a Supreme Court Justice.

How many other Steelers have gained over 100 yards in games during the rivalry?

On November 5th, 1950 the defending league champion Eagles are 5-1 and playing at home at Shibe taking on the struggling 2-5 Steelers.  Tailback Joe Geri lugs the leather for 113 yards on 25 physical plays in the 9-7 Steeler victory. This is the ONLY time in Steeler history that they have had a 100 yard rusher and beat the Eagles in Philadelphia.

From 1946 through 1969 the Steelers gained just 1,673 yards rushing (92 yards a game) in their losses in Philadelphia, while in the five games they won they averaged 129 yards a game. 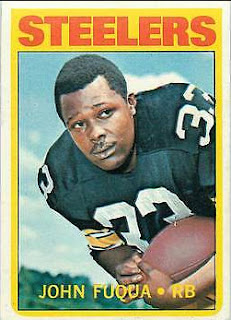 The last time a Steeler was able to dent the Eagles defense came on the last day of the 1970 season when John Fuqua gained a then team record 218 yards on 20 carries in the 30-20 loss at Franklin Field. Pittsburgh entered that game with a 5-8 record (dramatic improvement over '69), while the Eagles were only 2-10-1. Philadelphia has a 23-5 record at home against the Steelers (5-0 since the merger), and as stated above only three times has a Pittsburgh runner gained over 100 yards rushing. Pittsburgh has averaged only 119 yards a game rushing when visiting the city of Brotherly Love.