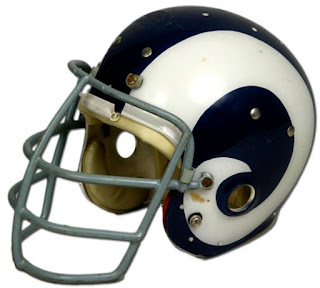 Finishing the Rams trifecta, here is one oddity that we've seen on other teams from time to time. It is the "1s" on a in the same year and/or other different fonts. In 1972 they had a few oddball jerseys, but the 1972 uniforms seemed to all match. However, the same is not true from 1965-69.

In 1964, from all the photos we've seen (the team photo was in blue jerseys that season) the all matched. It was a new color scheme and the jerseys would have been brand new and logic seems to suggest the mix-and-match of would not have occurred during that first year.

We count eleven players (how appropriate) that have a "1" in their uniform number. Using the Girdiron Uniform Database nomenclature, we count seven that are "pointy top" and four that are "box top".

Aside from Deacon Jones and Clancy Williams playing , we see three "7s" one Merlin Olsen (74) and  Roger Brown (78) and Coy Bacon (79). Jack Snow (84) has an odd "4" as might Mike Lahood (64) but that one is hard to tell. The count for ones in 1969 is nine and the winner this season is pointy tops with six and box tops with three. We are not counting Karl Sweetan (10) who is on until we can get a better look to see which his is.

Gabriel wore a curved "1" versus the Eagles and Giants (perhaps others) meaning for at least two games there were three types of "1s" on field at . 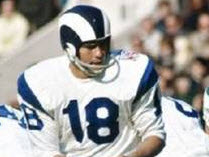 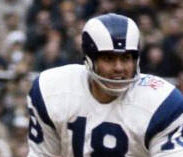 In the team photo taken late in , after injuries, etc.  count is still nine for "1s" and the count here is six for pointy top and three for box top. This time we see that Sweetan is likely wearing a pointy top.

In 1970 the Rams got new uniforms, though still Dureen with tackle-twill numbers, and these had a blue "V" collar and the numbers appeared to be, ahem . .

Again, the Rams got new uniforms, these were polyester with iron-on Vinflex numbers and they, too, were uniform throughout the team. The numerals were sans serifs at the bottom.