Since it is kind of a Rams kind of day, here are two helmets which were considered for the Rams in 2000 but were not selected due to the Zodiac. 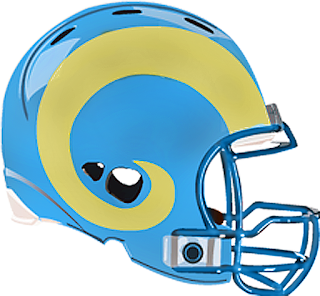 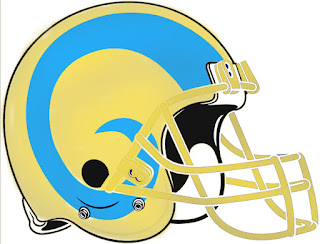 In 2000 the St. Louis Rams switched from a blue and gold scheme they had worn 1973 to a navy and old gold (millennium blue new century gold is what called it). However, the color scheme Rams owner Georgia Frontiere liked best was powder blue gold,

In an interview with former Rams equipment manager Todd Hewitt,  Helmet Hut got the following information from Hewitt:

Said Hewitt, "When we changed our color scheme in 2000, we actually considered many different possibilities, 15-20 combinations or so. Mrs. favorite color was powder blue. . . She thought the Rams would look great in this color and wanted to see some examples.  So we made up some powder blue helmets with gold horns and gold helmets with powder blue horns, which she loved.

But being someone that was very much into astrology, Mrs. agreed to the current color scheme because, actually, she liked the names of the colors we used: new century gold and millennium blue. She thought it made cosmic sense if you will, given the year was 2000."