Happy Birthday Red Grange
LOOKING BACK
By Chris Willis, NFL Films
On June 13, 1903 Harold Edward Grange was born in Forksville, Pennsylvania. A few years later his family moved to Wheaton, Illinois and became known as "Red" Grange for the rest of his life. Today will celebrate Grange's 113th Birthday. Football's most well known redhead would become one of the sports' most famous athletes and celebrity while playing in the Roaring Twenties and Great Depression. His nickname, "The Galloping Ghost," is one of the most popular in NFL history. So is his other nickname- "The Wheaton Iceman."
The Wheaton Iceman
In the summer of 1919 before his sophomore season at Wheaton High School, Red Grange accepted a job that would make him just as famous as his football exploits. In the ensuing years Grange always believed that delivering ice in the summer contributed to his athletic conditioning and success. But when he took the job hauling ice for L.C. Thompson & Company, operated by Luke Thompson, he did for one simple reason.

“I only thought of it that way afterward,” said Grange, “because there’s no doubt it made me stronger. But I did it for the money.”

Grange conceded later that each summer working on the ice route made him, “tough as nails and at least four weeks ahead of the other boys in conditioning. My iceman’s duties made my arms, shoulders and legs strong and developed my wind,” said Grange.

The job required working fourteen hours a day, from five in the morning to seven at night, six days a week. “I well remember all the agonizing moments I jabbed myself with the ice pick, got the ice stuck in my skin and dropped huge cakes of ice on my hands, feet and toes,” recalled Grange. “By nine p.m. I was usually in bed…that was the kind of life I led during the summers while I went to high school and college.”
Getting in Football Shape
Working as an iceman in the summer did get Grange in shape for the upcoming football season:

“It is an accepted fact the most important parts of a football player are his legs. Keeping those legs in shape represents the biggest single responsibility of a boy interested in playing football.

Delivering ice, which required my walking miles every day up and down stairs, kept me in all-around fine trim and provided the best possible off-season training for my legs.

The most important thing for a player to remember is that football isn’t a game that can be played just three months in the fall. In order to excel at sport, one must constantly work at keeping his body, and especially, his legs nine months of the year.

My job on filled the bill to a T.”
Ice Truck Trouble
working as an iceman, Grange, 17 years old, fell from the side of the truck and was run over by his co-worker and football teammate Herman Otto. Grange recalled the scary event:

“I had a careless habit of jumping on the running board of the ice truck while it moved down the street[one day] the handle alongside the cab of the truck, which I usually grabbed for support when I jumped on the running board, broke off in my hand. I tumbled into the street and under the truck which was loaded with three tons of ice. Before the vehicle could be brought to a stop, the back wheel ran over the meaty part of my left leg slightly above the knee.

Herman Otto nervously lifted me into the truck and took me to the doctor’s office. When I got over the initial became almost panic-stricken at the thought that I might never play ball again. When the doctor first looked at me he feared the knee was crushed and amputation of my leg would be necessary. Luckily, further examination revealed the wheel missed within an inch of involving the knee joint.

Although my leg was saved, I was given no better than a fifty-fifty chance of complete recovery.

Fate was kind, for in a matter of two to three weeks after I got out of was walking again with little ill effect. By fall I was well enough to report to football. Strangely enough, although I don’t think the injury ever hampered my ability to run, my left leg has remained numb to this day.”

Luke Thompson felt particularly bad for Grange as the accident would take away his best delivery man. He helped the family by paying all the doctor’s bills and continued to pay Red’s weekly salary. 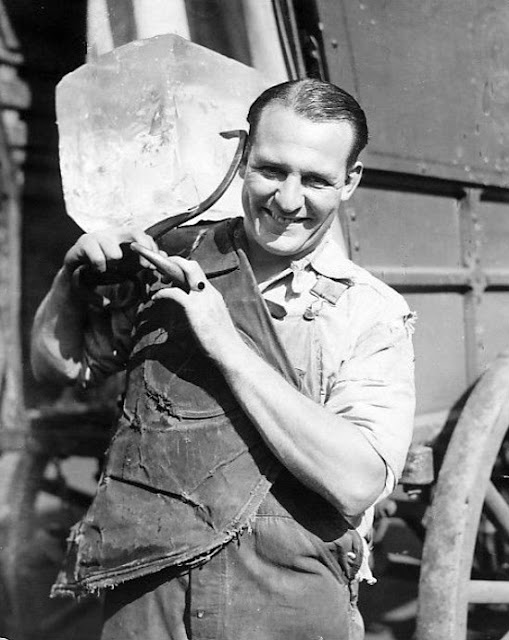 Red Grange would go on to work eight summers toting ice around Wheaton.
Happy 113 Birthday to the Wheaton Iceman.