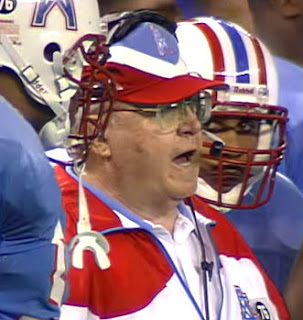 The Buddy Ryan 46 defense began in earnest in 1980 and progressed from there. Prior to that, there were teams that used the same or similar schemes but they we called different things.

One of the key things to the 46 was using two outside linebackers one the same side of the field, opposite the pass rushing end. Another key was having a dominant player over the center since all three interior linemen, the center and both guards were covered. Here is a look at who Buddy Ryan deployed over the years. 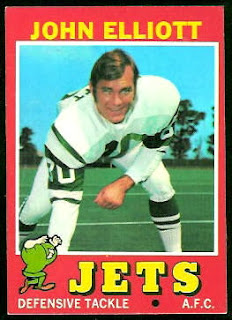 When he was the defensive line coach for the Jets he would use a 5-man line at times, moving one of the linebackers in a down position over a guard. That moved right defensive tackle John Elliott over the center. 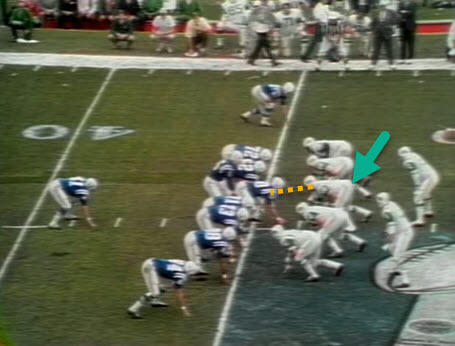 Elliott, though not known to most fans was a very good tackle, one of the best in the AFL/NFL in the late 1960s recording 32½ sacks from 1968 through 1970 and being named First- or Second-team All-AFL/NFL all three of those years. Perhaps a reasonable modern comparison is to say Elliott was similar to Keith Millard.

In 1976 Ryan moved to the Vikings and coached their defensive lines in 1976-77. The Vikings had long used 5-man lines in certain situations, often with Bob Lurtsema over the center and the rest of the Purple People Eaters would stay in their usual positions. 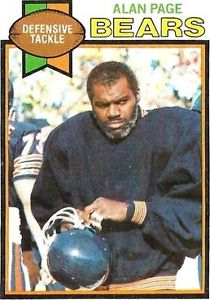 In 1976, Lurtsema was in Seattle with the Seahawks and Ryan changed things up a little, putting Alan Page over the center. 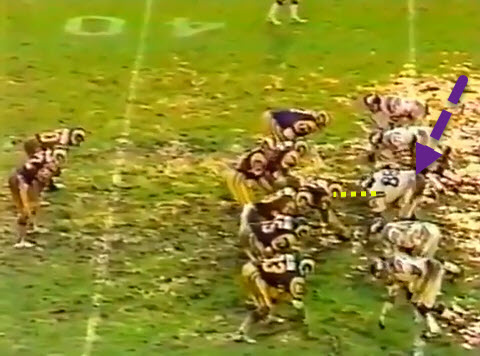 Again, this isn't the 46 defense but it is the Eagle/Bear front Bud Grant wouldn't allow the scheme that later became the 46 to be used. However, Ryan liked it enough to employ Alan Page in that rile with the Bears in 1980 and 1981.

Here is Page over the center in a precursor to the 46. 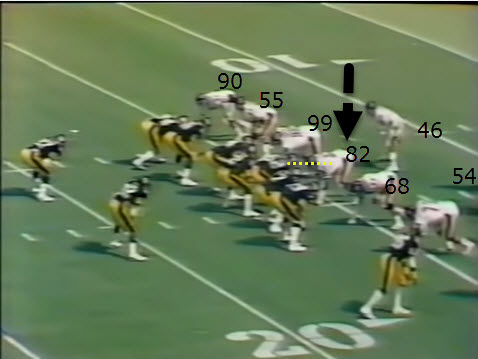 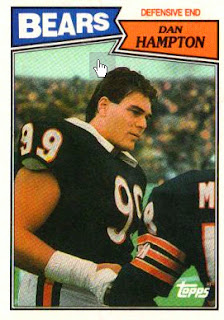 After Page retired the man over the nose was Dan Hampton. When Page was still with the club, Buddy Ryan would show Hampton films of Page and say, "This is what we want you do do, someday". 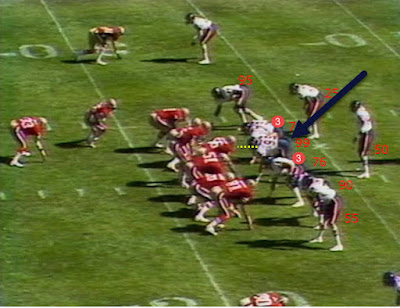 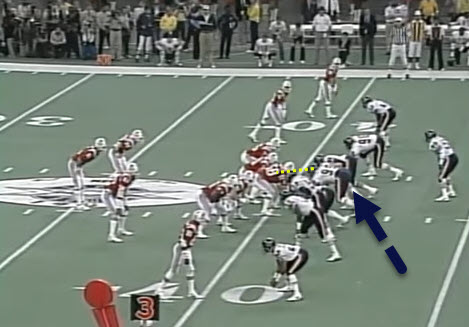 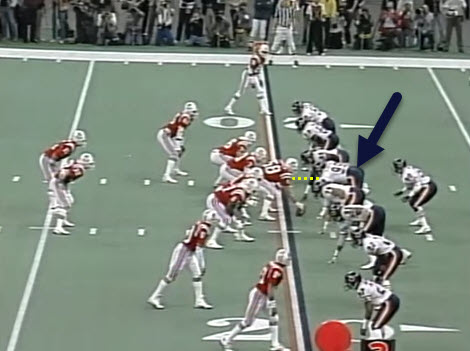 With Hampton the 46 rose to it's greatest heights, with the dominant win in Super Bowl XX. 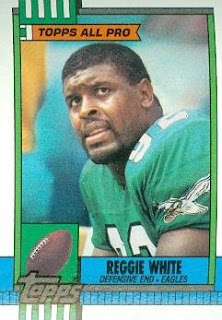 After the Super Bowl win Ryan was hired as the head coach of the Philadephia Eagles and when he used the 46 defense there it was Reggie White who manned the nose tackle spot. 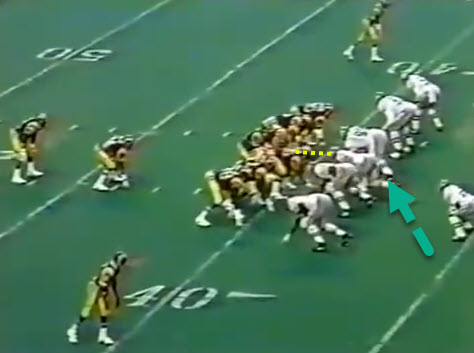 Ryan was fired after the 1990 season and reemerged in the NFL as the defensive coordinator of the Houston Oilers. 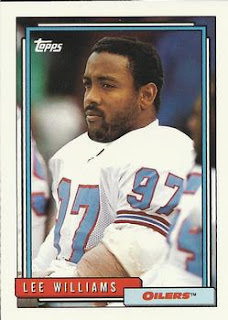 There, he changed things up in our view. Rather than using his best lineman, Ray Childress, on the nose he used a rushing tackle Lee Williams most of the time. And when Williams was out Ryan used Glenn Montgomery. Both were fin players, Williams, especially had "blue" traits. But neither were the player Childress was. It would seem like, given Ryan's history, that the nose position would be Childress's.  Of course, we didn't see all the 1993 Oilers games, so it's possible Childress did play some at nose in the 46, but if so, we cannot find footage of it. 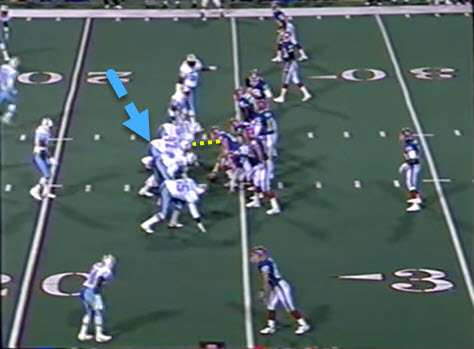 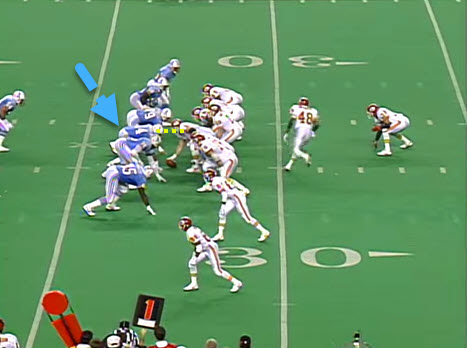 The 1993 Oilers defense was very good and it earned a spot for Ryan back in the NFL coaching ranks, this time with the Arizona Cardinals. 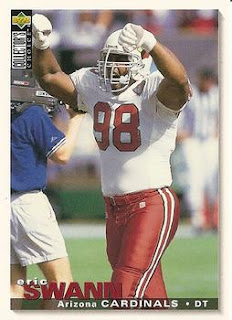 There, the man on the nose was Eric Swann. Another kind of forgotten name, but when healthy, Swann was a very good tackle and even made a Pro Bowl in 1995, Ryans final season with the Cardinals. 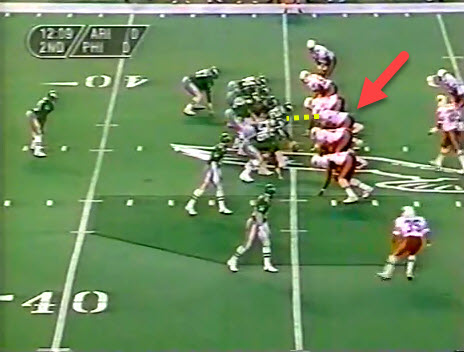 Swann was said to have some "Reggie White qualities" at the time, being that big with similar strength and quickness. Well, that was a bit of hyperbole, but he was no match for a center. Swann's bad knees eventually sidelined him but when healthy he was a big tackle who could stack the run and get good push on passing downs.

So there are the primary (not a 100% complete list) players who played over the center in Buddy Ryan's 5-man/46 defenses. One caveat: We are still looking but we cannot find enough footage, post-John Elliott, to see who might have played over the center then. We are not even sure how much the Jets used 5-linemen. The little we can finds suggest Ed Galigher might have played it in 1975.