By TJ Troup
There have been many men who made an impact on the history of the NFL, and today's saga is about a man who has never been given his proper due as a coach. That man is Nick Skorich.

He began his NFL career in 1946 after serving our country in WWII; including the Normandy invasion. The twenty-five-year-old rookie contributed to the contending Steelers as an offensive guard, and on defense as the middle guard in Pittsburgh's 5-3.

He usually came off the bench and played in the second and fourth quarters. Though he played both guard positions on offense, he usually is at right guard. Limited film study shows him pulling with quickness, and battling much bigger men in pass protection when the Steelers actually passed.

Jock Sutherland's 1947 team is the only Pittsburgh team that actually earned a play-off berth until 1972, and the story of that team is captured in Steve Massey's book Starless. The team photo on the front shows Skorich front and center the with ball between his knees. Again, he usually came off the bench in the second and fourth quarters.

Skorich demonstrated terrific technique using his hands to defeat blocks at middle guard, and his pursuit and tackling skills are top-notch. Massey states in his book that Dr. Sutherland praised him, and stated that Nick had a future in coaching when his playing days were finished. Pittsburgh's record during his three-year career was 17-17-1.

Nick Skorich rejoins the Steelers as line coach in 1954 under Walt Kiesling and was kept on staff when Buddy Parker took over in 1957. The Steeler passing game came to life under Jim Finks and Joe Bach. Pittsburgh usually ranked near the top in fewest yards lost passing from 1953 through 1956. The Steeler run game struggled, but pass blocking was consistent and rock-solid under Nick. Though many games could be detailed, there is a game from 1955 that bears discussion.

October 23rd the contending Steelers are at the Polo Grounds to take on long time rival New York. The hard-fought 19-17 win kept Pittsburgh in first place with a record of 4-1 (the one loss a controversial game in the Coliseum against Los Angeles). The Steelers had beaten the Giants twice in the first five weeks, and the offensive coordinator of New York—one Vincent Lombardi was at his wits end with the lack of production and consistency of his offense.

Lombardi got together with line coach Del Isola and dramatically changed the Giants blocking scheme to "zone blocking", sometimes called "run to daylight". This story is not the focus of this article, yet Barry Gottehrer's fascinating book The Giants of New York is well worth the time to find, and read.

This story is about Skorich, so let's get back to Nick. Pittsburgh proceeds to lose seven straight in 1955 and is inconsistent in Kiesling's final year in 1956, but film study shows the Steelers were outstanding as pass blockers. The 1957 season though a slight improvement with a 6-6 record, the pass blocking is not as efficient or crisp. Possibly Earl Morrall held the ball too long, or Skorich and Parker were not on the same page with the blocking scheme, but Nick leaves to become the offensive line coach of the Green Bay Packers in 1958.

The less said the better about Scooter McLean's complete failure with that Packer team the better. The next stop for Skorich is a turning point in his career. Buck Shaw endured a very frustrating year in 1958, and his famous quote to his players very late in the season about who would be a Philadelphia Eagle in 1959 was a turning point in that teams' history. Norm Van Brocklin was a savvy hard-bitten leader of men who controlled his huddle. His accuracy and knowledge of the passing game and the coverages he faced are legendary, but rarely if ever does anyone mention that the "Dutchman" got rid of the ball quickly.

Obviously, this made Skorich's job with the offensive line easier. Buck Shaw wanted a balanced offense, and Van Brocklin gave it to him. The Eagles run game was average at best, and film study shows a tough-minded technique-oriented o-line, but the title of this story is protection! Pass protection in '58 before Skorich arrived was excellent as Van Brocklin was dumped for just 46 yards in losses(team lost 75), and never gave up more than 2 sacks in any game. Very impressive for a fifth-place team.

Skorich has made a contribution with his offensive line that receives little or no credit outside of the locker room. Seven times in twelve games the Eagles offensive line did not allow Van Brocklin to be taken down. The Pittsburgh Steelers and New York Giants with all of their skilled tough d-line did not once take down an Eagle quarterback during the '59 campaign! The improved 7-5 record while noticeable does not mean that anyone really believes the Eagles are true contenders in 1960.

Don Schiffer's Pro Football Handbook, and Petersen's Pro Football both pick Philadelphia for third place, and though both publications write about the much-improved o-line with a cast of newcomers—the Eagles are considered a long shot behind New York and Cleveland. During the opening day loss to the Browns back-up quarterback Sonny Jurgensen is dumped for an eight-yard loss, that will be the last time a Philadelphia quarterback will be taken down for six weeks!

The Eagles kept winning and protecting Van Brocklin. When injury forces Bednarik to be moved to left linebacker from center (he does not go both ways very much in the regular season unless a key play here or there) Bill Lapham takes over at center. He is not near as skilled in pass blocking as veteran concrete Charley, and in the key win over New York Van Brocklin goes down three times. New York with creative Tom Landry calling red dogs and line stunts brings the pressure. The next week when Philadelphia again beats New York Van Brocklin does not go down again demonstrating that Skorich can adapt, and teach his young warriors.

For the '60 season, Van Brocklin and Jurgensen are dumped for 141 yards in losses. Before Shaw's arrival the Eagle running backs lost the handle on the ball often. Losing fumbles is never a positive, and recent long term research has taught me the following—when a team does not have its quarterback go down, and does not lose a fumble that team wins 75% of the time (from 1950 through 1969).

Three times the Eagles accomplished this impressive feat in 1960 and won all three times. Nick Skorich now has a Championship ring. Buck Shaw retires, and his replacement is Nick Skorich. Philadelphia stays in the title hunt for the entire '61 campaign, and though the o-line still is adequate at pass protection, and Jurgensen sets league records—the o-line is not as well-coached as when Skorich was their leader and teacher.

Philadelphia struggles mightily during '62 & '63, and Skorich is cashiered as head coach. Blanton Collier hires Nick to be the defensive line coach for the Browns in 1964. Having been down that coaching road myself there are men who use out of the box thinking; if he can teach blocking, he can teach how to shed blocks, and defeat pass blockers. The result with a veteran d-line in Cleveland is an upset victory over Baltimore in the title game. Nick is a champion again.

Eventually, Collier moves coach Skorich into the position of offensive coordinator, and boy oh boy is he successful in orchestrating the Browns offense into a productive powerhouse. Cleveland twice upsets Dallas in eastern conference playoff games, and though beaten in title games—the Browns offense is consistent, creative, and productive under Nick Skorich. 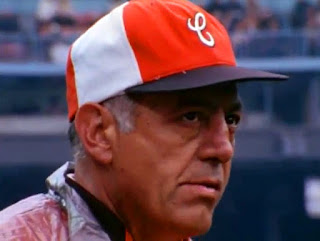 When Collier retires after 1970 Skorich again gets a chance to lead a team. The Browns are back in the play-offs in both 1971 and '72. Nick Skorich has talented o-line in Cleveland and they sure are capable of keeping the quarterback upright and not getting "SACKED"—we now use that term based upon a very vocal and talented pass rusher in Los Angeles.

For seventy games (1968 through 1972) the Browns allow only 53 sacks in 23 losses, and even more impressive only 53 sacks in 47 wins and a tie! Though there are other offensive line coaches historically that are excellent at teaching pass blocking. 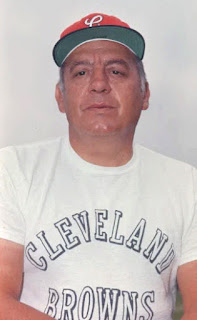 Nick Skorich could have made the claim that from 1954 through 1972 he was the best, with the possible exception of Lombardi. When his coaching career came to a close, Nick went on to be the supervisor of officials for the NFL, yet for me, he will always be known as a man who could teach, and coach offensive lineman.

Will end today with a short, yet pointed comments concerning a recent article online at Sports Illustrated. For those of you who have not read Grant Cohn's disaster of an article on the Mount Rushmore of defensive coaches, would relish comments from all of you after reading it.

How much film of the '50's and '60's did Cohn watch? How many books has he written on the history of NFL defensive football?

Jerry Williams did not invent nickel coverage! Bud Carson did not invent Cover-2! Dick LeBeau did not invent the zone blitz! My library has film that refutes all of what Cohn writes. The end result you ask? After 39 years my subscription to SI has ended abruptly, and Paul Lionel Zimmerman is turning over in his grave. Imagine for a moment the descriptive adjectives Dr. Z would have for Cohn?
Posted by TJ Troup at 8:58 AM