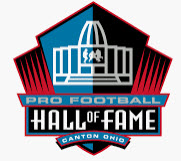 According to the Hall, it is "Presented periodically to an individual who has made significant and innovative contributions to professional football."

Gehrke won it for creating the NFL's first helmet logo, Ward for creating the College All-Star game among other things. Facenda for his work voicing NFL Films features, Boss for being the creative force behind NFL Properties, Toma for being a genius in terms of groundskeeping, the City of Pottsville (who rejected the award) as recognition for the lost NFL title in 1925 (a discussion for another day), Steve Sabol for being the creative leader for NFL films, Art McNally for NFL officiating leadership and Joe Browne for being the NFL's publicity man for many years.

We've always felt Seymour Siwoff (Elias Sports Bureau) and Merv Corning (artist) deserved the award and as we said among others, though now with the Hall of Fame's contributor category Siwoff deserves induction to the Hall of Fame itself as a contributor.
Some of those others worthy of the Ralph Hay Hay Pioneer Award would be Amy Trask, the NFL's first female Chief Executive. Another would be William “Pudge” Hefflefinger footballs first professional player. Charles Follis, the first black professional football player should also be included.

Corning's artistry was incredible and so prolific he is deserving of some sort of recognition and the Pioneer Award seems fitting.
Trask,  Hefflefinger, and Follis did not have professional careers that were distinguished in terms of success by Hall of Fame standards (Hefflefinger is in the College Hall of Fame)—the best of the best or "the truly great" but they, too are deserving of recognition as pioneers, if not the Hall of Fame itself, the Pioneer Award is exactly the fit for their contributions to the game.
We would encourage the Hall of Fame to not give the award every 4-5 years but perhaps every 2-3 years because, in addition to the 4-5 names here, there are undoubtedly others worthy of an award like the Hay for people who were pioneers who are not Hall of Fame-worthy.
Posted by John Turney at 12:55 PM