When the name Seymour Siwoff is mentioned 99% of current NFL fans would say, "Who?" Yet likely 100% of NFL fans who enjoy things like fantasy football, NFL analytics sites such as Pro Football  Focus, Football Outsiders, or Cold Hard Football Facts and wouldn't be able to do so without the work of Seymour Siwoff. Yes, all of us who love football and who love to count things related to the game it is an absolute fact that Seymour Siwoff has fed us with football statistics for our entire lives.

So who is he? Siwoff was a WWII veteran was received a Purple Heart when he was wounded in Italy. After returning from the war Siwoff, in 1952, after a stint as the company accountant, purchased what was then Elias Bureau and renamed it Elias Sports Bureau and in 1961 he was hired to organize and produce and distribute the statistics for the National Football League which he has done so ever since. Even now, at age 97, he remains the president of  Elias Sports Bureau.

Prior to 1961, the NFL records were a mess (full of errors and omissions), and part of the reason for that was a fire in the Chicago Bears facility where many of the NFL records were stored and were destroyed in the blaze. So when Elias took over it was not only a new job they had in recording the current statistics, the old statistics had to be recreated and checked. Because that task was accomplished we have a rich history of NFL statistics predating Elias.

Siwoff also added new stats such as team sacks (then called 'times tackled attempting to pass') in 1963 because he saw the yardage total the league had been using and new there had to be a numerative feature to match with the yardage. He added the individual sack in 1982 (with some prompting from Jet President Jim Kensil).

In addition to all the work/improvement, Seymour contributed to the record book and the standard statistics as well as all the next-level statistics that started under him—Things like red-zone statistics, quarterback W-L records, game-winning drives, average yard line starts, third-down percentages, fourth-down percentages as well as just about all esoteric NFL statistics you've seen in the 1960s-2000s—data that is now used to enhance every NFL telecast all began under Seymour’s direction at Elias.

Add to that the idea of taking statistics and making fun/interesting facts out of them––most career TD passes from one QB to one receiver, most consecutive starts by a QB, oldest player to start a Super Bowl––all these notes that fill every NFL and team PR release before every game days––started with Seymour and his staff. Just go to Pro Football Reference the online statistical site and ask, 'How much of that is NOT the initial work of Elias Sports Bureau?'

We at Pro Football Journal have had our disagreements with Siwoff over the years. He was adamantly against backdating the individual sack statistics, which we have attempted to do, but it's an honest disagreement and we respect his perspective. In fact, we don't think they should be official, just available so there wasn't that much of a disagreement.

Also, we called for Elias to backdate net punting stats from 1960-75 (they are available in the 1950s and became official in 1976 but there is a black hole that we'd love to see filled) but again, it's just a disagreement. It does not take away, in our view, Siwoff's contributions to the game of football. And that net punting average is another added stat that Seymour embraced—the idea that the punter’s statistics shouldn’t suffer if he was good at hitting the coffin corner instead of kicking five years further and having it come out to the 20, which is of course why we want it for the missing years. In our own research (which is incomplete) we show Bobby Joe Green may be the most underrated punter ever because he kicked for a high net average year-in and year-out before it was "cool". But without Siwoff adding it we wouldn't have the basis by which to compare, so even in our small differences we only are at the starting point because of Siwoff so who are we to complain? 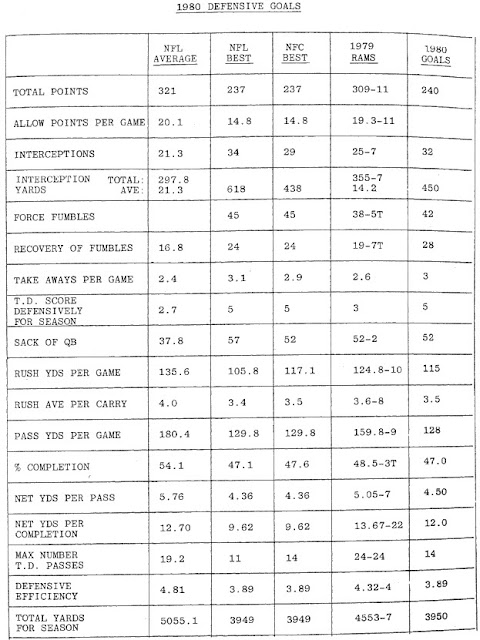 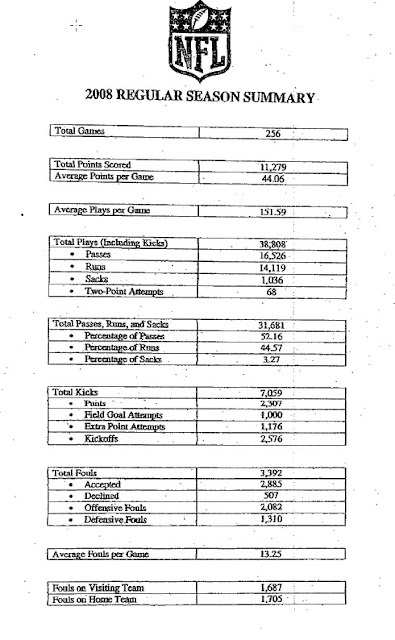 The above tables and charts can be found in most NFL Playbooks, at least the scores of playbooks we have collected. So Siwoff and his team not only contributed to the fans enjoyment, but also to the coaches ability to do their jobs. And there it is—contributions. If there is a contributors category for the Pro Football Hall of Fame then shouldn't a person's contributions count? It's pretty plain to see that Siwoff's contributions are tangible and measurable. Just pick up an old NFL Preview Magazine—any of them—Street and Smith's, Sporting News, Sports Illustrated and anytime you see a statistic, any statistic think of Seymour.

What if someone less dedicated to accuracy and innovation had been hired to do the NFL stats in 1961? It's pretty clear NFL fans LOVE statistics and in the 1960s, 1970s, and 1980s those statistics were a part of the game's growth and storyline.

And to us, that is one way how you can measure contributions—how pervasive are they? The work Siwoff pioneered touches nearly every article, almost every Tweet, every book, every blog, and every website that has NFL football as its subject.

And here is the key:  It is so pervasive that it is taken for granted thousands and thousands of times a day, every day. Football fans expect to click on a link or any football site and get meaningful statistics. And those who take the more basic stats and twist and turn them to get a DVOA or N/YPA or anything else starts with the work of Elias. There is no way to do most analytics without them. Siwoff's work became more like a utility than anything, like electricity or running water, we expect it to be there as football fans. That is an impact, that is a contribution.

Again, from Kirshenbaum,"For all that enthusiasm, though, Siwoff knows enough to keep his statistics—and himself—in proper perspective. "There's more to sports than just data," he acknowledges. "You have to look at the broader picture, too. In football, a guy might gain a lot of yards rushing. But it could say more about his blocking or the other team's defense than it does about his own ability. And look at fielding figures in baseball; they tell you tragically little. Even an outfielder's assists don't mean much. If he has a really good arm, he might not have too many assists because they're all afraid to run on him".

So, Seymour gets it. Our motto at PFJ is "Football is art. I like the numbers, and love to count things. But I love the art more," and Siwoffs comments are similar, "There's more to sports than just data,". Amen, brother.

Look, we are in favor of George Young getting into the Hall of Fame as soon as possible. But we also strongly support those outside-the-box contributors like Steve Sabol and yes, Seymour Siwoff. We don't think they served on as many NFL committees as DeBartolo, Modell, Jones, Bowlen or Kraft, but the contributions are great in terms of reach and enjoyment, and growth of the game than any of these modern owners in our view.

Siwoff is a vital character in the NFL's history. Sure, one could write the history of the NFL without him (many have) but when you mention Johnny Unitas's 47-consecutive game streak with a touchdown pass or Eric Dickerson's 2,105 yards rushing you only know that because of Siwoff, and because of that he should be a very serious candidate for the Pro Football Hall of Fame in the contributor's category. His contributions are really incalculable. 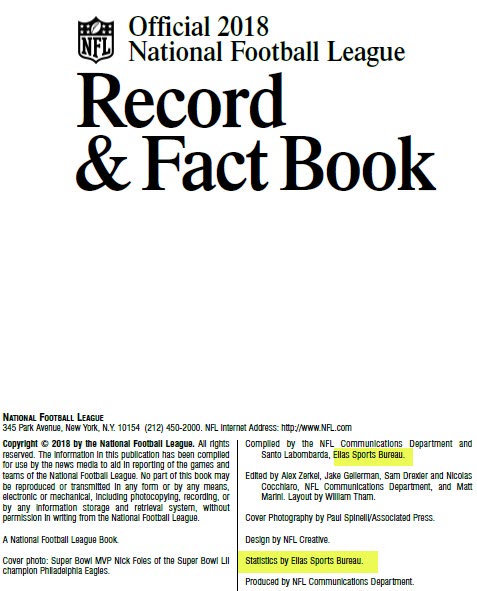 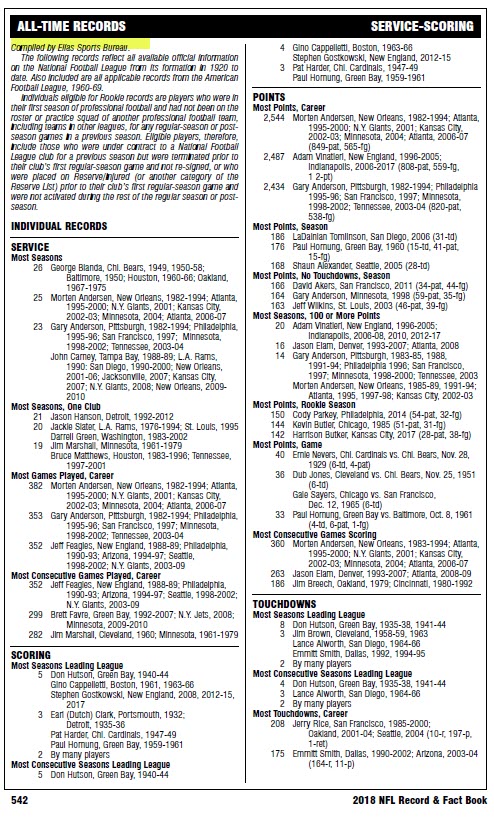