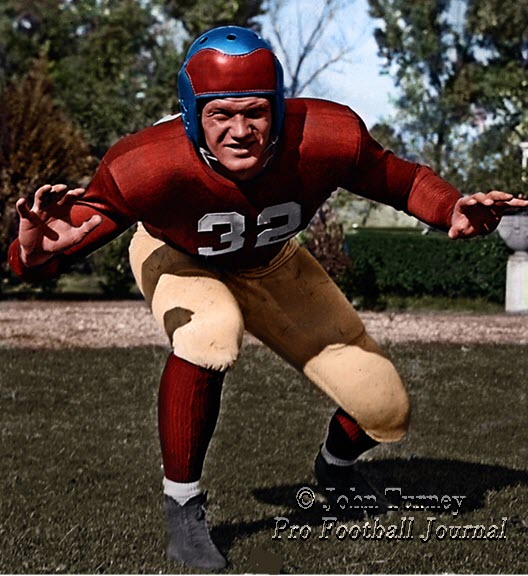 Al Blozis only played 23 games in the NFL from 1942-44 before shipping over to Europe to served in World War II. Tragically he was killed in action.

Per Wikipedia:
He was commissioned as a second lieutenant in the 28th Infantry Division. On January 31, 1945, his platoon was in the Vosges Mountains of France scouting enemy lines. When two of his men, a Sergeant and a private, failed to return from a patrol, he went in search of them alone. He never returned.

We've seen some film of Blozis and in our judgment, he was the best defensive player in the NFL in 1943 and would be our choice for a retro Defensive Player of the Year Award. he was listed as a defensive tackle and that was accurate, but in those days the alignments were different. He spent most of his time lined up over an offensive tackle and these days that would make him a defensive end (the same is true of Arnie Weinmeister as well).

Here above is our colorization salute to a true hero:  Al Blozis.
Posted by John Turney at 9:30 PM