LOOKING BACK
By John Turney
In 1977 Harvey Martin was on top of the world—He was a Super Bowl champ, a Super Bowl co-MVP, an All-Pro, a Pro Bowler and the NFL and NFC Defensive Player of the Year. A defender cannot do much better than that in s single season. Martin also led the NFL in sacks, though the stat was not official and there has been misleading information about what the total was which we will explore. It's not a huge difference, but we certainly think regardless of the total of sacks it may still be the best season ever by a Dallas Cowboys defender.

If you count sacks the way they are counted now (where if you share a sack you get credit for a ½ sack and if you do it alone it's a solo sack) then his total was 20. 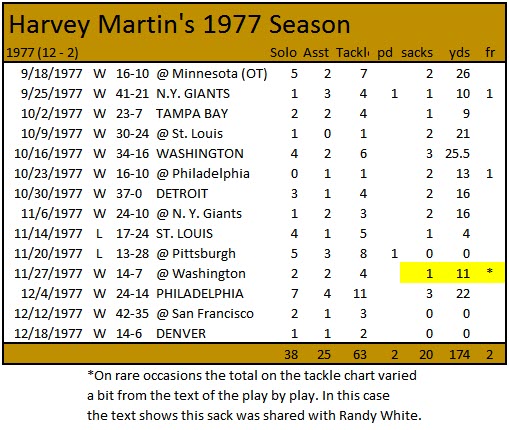 As the chart notes, according to the semi-official play-by-plays (now called gamebooks) the total was 20 sacks. There is a caveat as noted. The text of the Week 9 Gamebook shows his sack was shared with White, but the tackle chart shows it was a solo tackle. See below. Tackle chart first, text next. 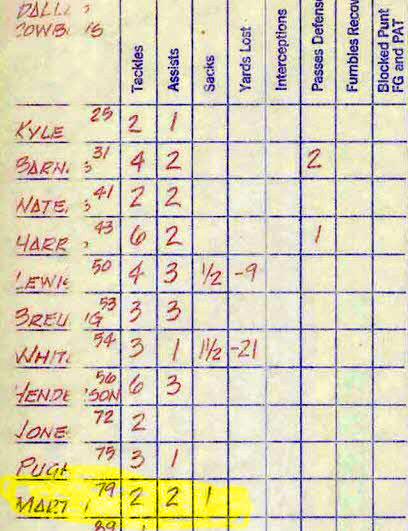 To add to the confusion at the time the Cowboys didn't distinguish the difference and the team released a total of 23. That number appeared in the Cowboys Media Guide though 1989:

In 1990 the Cowboys corrected the record and used the more proper total of 20 in the 1990 iteration of the Media Guide:

That correct total remained in the Media Guide through 2001: 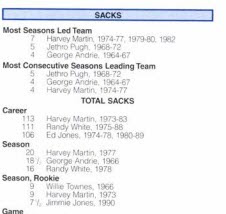 But in 2002, the incorrect total of 23 reappeared in the Cowboys media and has remained ever since:

Nonetheless, Martin's season, whether 19½ or 20 sacks (we say 20) and all the other accolades was one of the best seasons by any defender for the decade of the 1970s and is worthy to remember.
Posted by John Turney at 12:51 PM