Issues with Recent Owners and the Pro Football Hall of Fame 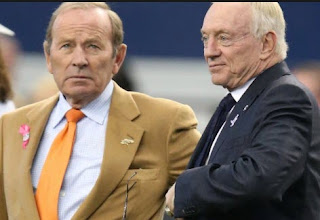 For the last couple of years, in my memory anyway, there has been plenty of media about how Pat Bowlen has been disrespected because a few other owners/contributors have made the Pro Football Hall of Fame before him. Much of it came from the Denver media but possibly from elsewhere.

In 2014 the Pro Football Hall of Fame added a contributor category to honor those who didn't play or  coach but who significantly contributed to the NFL. I am told it wasn't supposed to be a defacto "owner" slot and so far it's been split between owners and general manager types.

It would be a solid bet that this year, since there are two slots, that Pat Bowlen will be one of them. Media reports stated that he's been close for the last few years so I expect him to make it over the top in a couple of weeks when the contributor committee meets.

In my view, and this is simply me, it's nothing to get excited about one way or the other. Modern owners in the Hall of Fame is a contrivance anyway. I have been told that with the massive investments the NFL made in the past 5-10 years that the owners wanted to be remembered with Hall of Fame Gold Jackets. Now, we cannot prove a quid pro quo but it seems pretty close at least in terms of the timing. Just follow the money the NFL has moved into Canton and the decision the HOF Board made to add contributors does make a little sense, though, as I said, impossible to prove.

Another issue is that I am also told plenty of the players don't like the fact that the owners get the same Gold Jacket they do, that they think it's fine for them to be in HOF but that there should be a distinguishment between players and coaches and even general managers and ownership.

Sure, you will get former players like John Elway will not say that in fact, Elway says "No one has given more to the game than Pat Bowlen". I don't know how to measure that but Chuck Hughes and Kory Stringer may have something to say about that. But the point remains, there are Hall of Fame players who don't think owners should get the same accolades as players and coaches.

Former Cowboy and author Peter Gent captured what some of the former players may feel in this scene from the film North Dallas 40.

Protagonist wide receiver Phil Elliott, speaking to Dallas head Coach B.A. Strothers and the North Dallas Ownership—"Chrissakes B.A. WE'RE not the team. They're the TEAM. These guys right here. They're the team, We're the equipment, the jock straps, the helmets,  and they just depreciate us and take us off the goddamn tax returns, that's what that is."

Gent's groundbreaking book (of the same name as the film) portrayed transparent and unflattering portraits of Dallas owners Clint Murchison, Tex Schram, Gil Brandt, Tom Landry and others and those caricatures did, at the time, illustrate how many players felt about ownership. And while fiction, Gent's said he tried the capture the essence of what he saw while with the Cowboys. And it's likely that many or most teams were run in the same way at the time.

There is less enmity, in my view, now, though the kneeling for the National Anthem issue is causing a stir lately. So, for these and other reasons what owner and what committees he served on and what writers he fed information to does not make up for the fact that he's not a player or coach.

Also, I find it ironic that based on the website Your Team Cheats the owners in and being considered for the HOF score pretty high–

Pat Bowlen (likely to get in this year)

Robert Kraft (likely to get in in next 4-6 years)

Certainly, things are better between owners and players now than they were in the 1960s, 70s, and 80s (and before). But are they where they need to be? Perhaps. But as strictly an observer whether an owner makes the Hall of Fame or not has little effect on the Hall itself.

Additionally, it begs another question why was Carrol Rosenbloom ignored? Because he died? He was a major part of three championships, part of hiring Pete Rozelle as commissioner, was part of the AFL-NFL merger, even traded a franchise. Do I care? Not really, other than to point out the recent DeBartolo, Jones, and soon to be Bowlen choices smack of recentism—things without an aim toward a long-term, historical view.  There seems to be recentism in the HOF selections anyway and the contributor category is not an exception.

Here’s a look at the owners who are already in the HOF (source Pro Football Hall of Fame). Does anyone really care about folks on this list, other than the founders of the league and those vital to the AFL-NFL merger? I can think of a couple I'd like to kick out, even. But even those who are in, as compared to those who are out, there seems little difference.

I know some who are partisan will say this team has had its success and that merits more Hall of Famers, including the owner. And the owner was on this committee and that committee that "made the NFL what it is today". Please. I have access to some owners meeting notes going back for many years and it's pretty dull reading. It doesn't seem like the things they discuss are the stuff of the Hall of Fame. It seems like doing good "committee work" is more in line with being a good businessman rather than a Hall of Famer. It is still the Pro Football Hall of Fame not the Business Man's Hall of Fame, right?

If an owner bought teams in the 1980s or 1990s all they had to do was keep the NFL juggernaut on the rails, at least compared to what was going on in the first 50-60 years of the league. Back then teams actually folded. That hasn't happened since the early 1950s. So, compared to now, the league is extremely stable and ownership is important but not worthy of the praise it gets from the supporters of particular candidates for the Hall of Fame. It seems like there is a LOT of hyperbole.