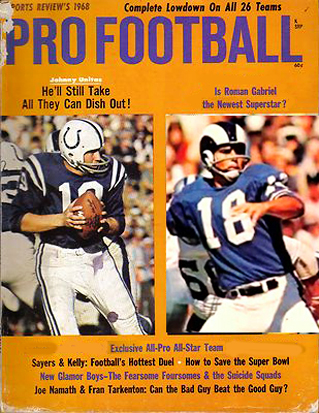 Not that it was much of a race—the 1967 MVP winner, Johnny Unitas won in a landslide: 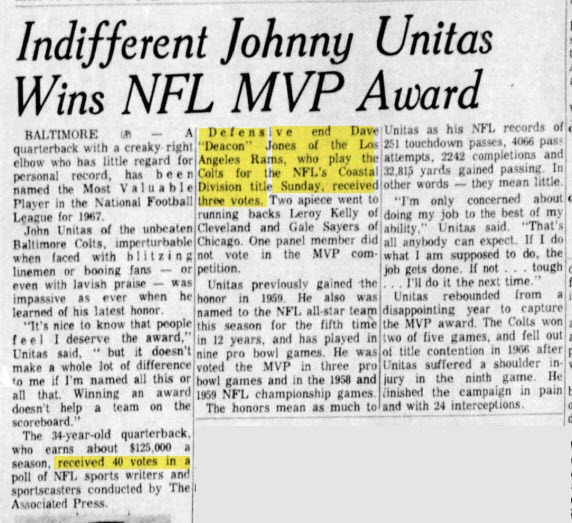 It was interesting in that the Associated Press vote was taken prior to the final game of the season and there was a great final matchup between the Unitas's Colts who were 11-0-2 and the Los Angeles Rams who were 10-1-2. The AP MVP award was released on December 15, 1967, and the finale was played on December 17, 1967.

Here are Unitas's stats game-by-game (credit Pro Football Reference) and also Roman Gabriel's stats game by game. Also included is season totals as of the 12th, 13th and 14th games to gage what the papers would have shown in the stat columns, though the passer rating would not have been part of that, it was figured differently prior to 1973. 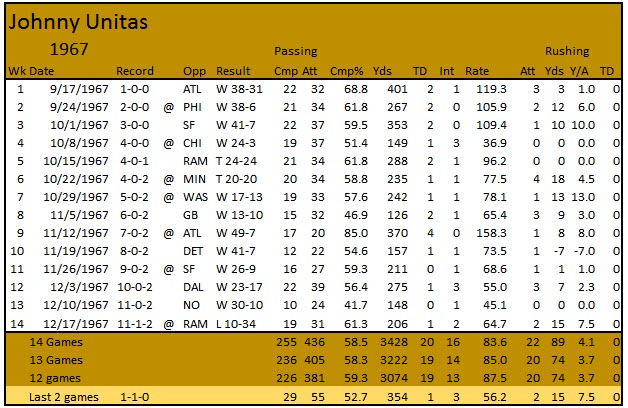 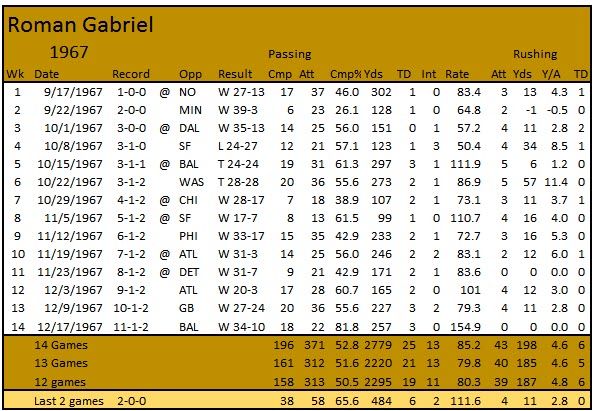 As can be seen it was Unitas's record that separated him from other potential contenders, but also the stats show a late-season slump that was seemingly ignored by the AP Voters.

So, using current rather than 1960s sensibilities in judging these matters and assuming the vote were taken after the season finale, would Unitas have won the award?

In the last game, the Rams thumped the Colts and Roman Gabriel was the AP Offensive Player of the Week, an award he won the previous week in a key win over the eventual Super Bowl champs the Green Bay Packers. After 12 games both Unitas and Gabriel had 19 touchdown passes and by season's end, Gabriel had 25 (Sonny Jurgenson led the NFL with 31 but was on a mediocre team). Unitas won the AP Offensive POW for Week 1 and as mentioned Gabriel got the award for Weeks 13 and 14. Jurgenson got it for Week 10.

Gabriel also rushed for six touchdowns, much like Tom Brady is now, Gabriel was a very good short-yardage and goalline runner and since the Rams didn't have a steady back who was good at that it fell to Gabe to get the 3rd and 1s and 4th and goals.

We think it's possible, with 20/20 hindsight that Gabriel had the better regular season of the two. And the statistical champ would be Jurgensen. But, of course, it cannot be changed but what if Gabriel had been a two-time MVP? Would that have launched him into the HOF?

But we'd need to look at 1969 (when Gabriel was the consensus MVP) the same way as 1967. The Rams rolled to an 11-0 start, then lost the final three games, though there was a bit of resting going in the final two games, and in looking at it, perhaps the best player in the NFL in 1969 was Dick Butkus or even Carl Eller (the best player on the best defense) who was the runner-up in the AP voting in 1969 like Deacon Jones was in 1967.

The late-season slump didn't affect the UPI Player of the Year voters or the NEA (Players) MVP. Both of them, presumably, were voted on after the full 14 games based on when they were released and both chose Unitas by comfortable margins. 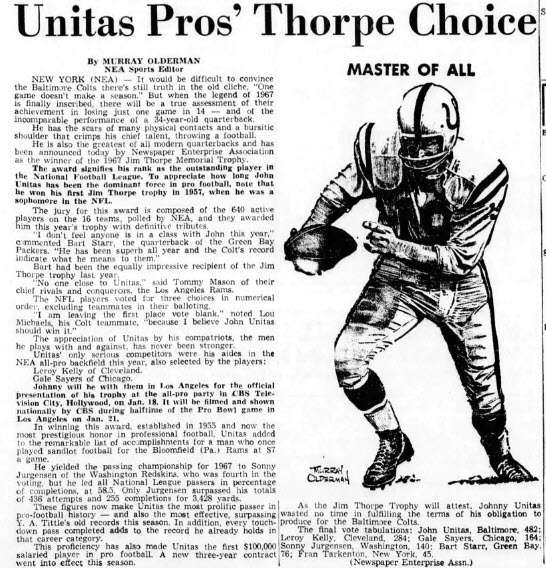 So, in the end, it doesn't make much difference, but to us it's always fun to take a look back and ask some questions given how the actions of the voting bodies change and when some of the awards were based on 13, rather than 14 games and perhaps that final game is a big one, as it was in 1967.