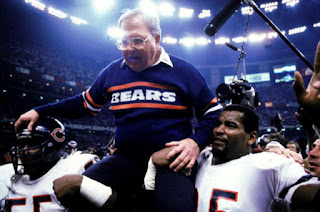 Buddy Ryan entered the NFL with a bang, he was the defensive line coach for the New York Jets beginning in 1968 and that year the Jets defeated the Colts in Super Bowl III

He remained with the Jets until 1975, when he left to be the defensive line coach of the Vikings. He was there for a couple of years and from 1978-85 he was the defensive coordinator for the Bear, where he established his legacy with the 1985 Bear defense, thought to be one of the best, if not the best single-season defenses of all time.

His success there led to his head coaching job with the Eagles from 1986-90, when Wade Phillips and Jeff Fisher ran his defense. He was fired after the 1990 season and was out of football for a couple of years and took the job as the defensive coordinator for the Houston Oilers.

That reestablished Ryan's bona fides and he got a second head coaching job in Arizona.

Here is a chart showing the performance of Ryan's defenses/defensive lines year-by-year: 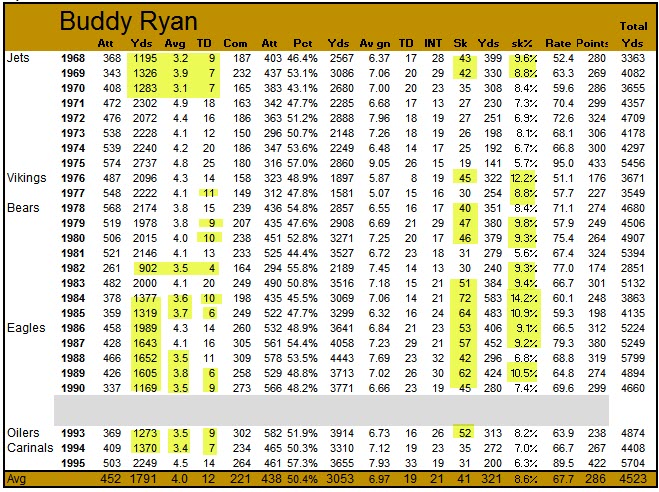 As can be seen, the Jets defensive line was stellar versus the run from 1968-70. Injuries to Gerry Philbin and John Elliott as well as trading away Verlon Biggs cut into their effectiveness after that.

The next time Ryan had a defense that allowed around 100 yards a game or less was 1982 with the Bears. But from then on his teams were excellent at stopping the run and in sacking the quarterback.

Over his career his teams had a sack rate of 8.6%, that is they sack the quarterback on 8.6% of his dropbacks. The 1971-81 run defense totals (years there was little talent to work with in New York and Chicago) skew him towards average, with a 4.0 yards per carry average.
Posted by John Turney at 11:11 AM