When The Fan Was Not Fed: Pre-Elias


John Turney's outstanding article yesterday on Seymour Siwoff and the Elias Sports Bureau sure inspired me. Thus the following; research is much more difficult when the film and statistics are not the same.

Where to begin? During the decade of the 1940's the NFL had a separate category for laterals. While this is not the most important category, anyone who looked at the stats would see errors. Not sure if Joseph T. LaBrum had enough help, but his name is listed on the league manual. 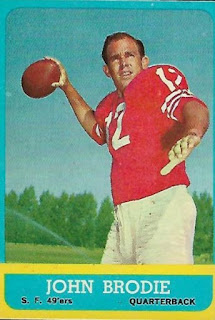 When the lateral category was changed with the dawning of a new decade the yards gained went into the category of the play; i.e.; Brodie throws to Conner for 13 yards vs. Eagles in October of 1958, and he laterals to Owens who gains another 48. This 61 yard play is John Brodie's longest completion of the year.

So, the most poignant question; were there errors in listing the laterals? Yes, there were, and at times listed in the wrong category. Should have been on interception return yards, but was listed in rushing is just one example. 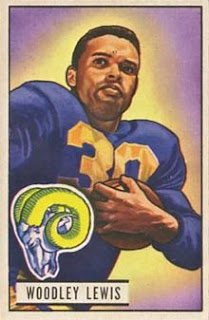 The Rams are playing the Lions in '53 and Woodley Lewis returns a punt, and laterals to guard Duane Putnam who goes an additional 21 yards. Is Putnam listed in the league manual? No! Should he be? Of course, and when you have the play by play and film and they both show the Putnam play that speaks to the researchers on what to do with the play? 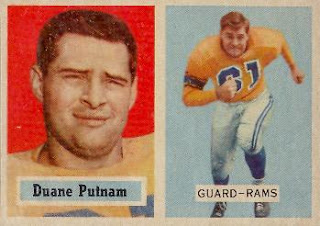 Then as John stated so emphatically, Elias took over and chose to correct as much stat data as they could while also keeping each seasons current stats accurate. There are folks across the country who have shown tremendous dedication to the team they cheer for. The most prominent is Mr. Eric Goska.

Eric's detailed play by play of Packer history, and his dogged determination in making sure all the numbers add up is an indication that this Northwestern Wildcat math major wanted complete and detailed accuracy. Having worked with and become friends with Eric over the years on many projects just shows that a Packer fan, and a Bear fan can coexist, and in fact work well together. Anyone who relishes Packer history should/must own his book on Packer history. Eric is not alone. Terry Musolf was most helpful with my projects as he knows Colts history. Should every team have someone like Terry or Eric? Of course!

Since I mentioned the Bears, and John stated in his story yesterday that the fire in Bears headquarters caused the loss of so much historical data. While many would assume, and folks be careful you know what happens when people assume—the Bear organization has made little or no attempt in the past about attaining the game by game stats pre-fire. That may change now that Mr. Jared Ellerson is in charge of the media? Jared are you listening? Recently my research quest has taken me to a category that is listed last on the score sheets—fumble returns and recoveries. Later this year will detail what I have learned/gained by attempting to research this category, and there will be a story attached on Cardinal Tom Wham.
Posted by TJ Troup at 7:29 AM