Nailed It: Bowlen and Brandt 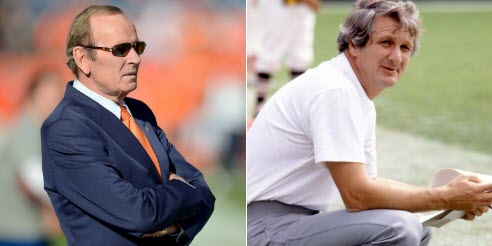 Pat Bowlen and Gil Brandt are indeed the two contributor nominees for the Class of 2019 for the Pro Football Hall of Fame as we predicted two days ago (a week ago if you count our posts on the PFRA chat page).

We predict both will get the 80% of the necessary votes next February when the entire committee meets to vote on the upcoming class. And with the deck cleared with these two, we expect George Young to emerge as the sole contributor nominee for the Class of 2020. (In even years there are two contributor nominees and in odd years there is one, and the opposite is true for the senior committee nominees). Young, we feel, has some tangible achievements such as being a five-time NFL Executive of the Year winner so we expect that to get recognized next year.

As we've mentioned we don't get too excited for modern owners getting into the Hall of Fame, but it is a necessity (a necessary evil?) given the amount of money the NFL sends to Canton and the fact that NFL Owners are on the Hall of Fame Board of directors.

We also think it's odd that Eddie Debartolo, Jerry Jones, and now Bowlen, the first three owners who are in or will be in the Hall of Fame, all had issues of cheating in terms of the salary cap. DeBartolo had to pay $300,000 and surrender two a 3rd and 5th round pick. Jones didn't lose picks but had to pay $10 million and had to trim his salary cap by $10 million as punishment.

So, of course, it makes sense to put those three modern owners in first. We are sure Robert Kraft will be the nominee in three to five years to have a really fearsome foursome of questionable ethics in the Hall of Fame.

But, as we said, it's nothing to be excited about, the Hall of Fame does not lack anything if these modern owners are in and it gains nothing in terms of significance if they are in. Plenty of Hall of Fame players are not pleased that the owners get to wear the same jacket they wear and get recognized as football Hall of Famers so they will never be accepted by the rank and file Hall of Famers anyway.

If there were an award for being good businessmen (sitting on this committee or that committee) then the owners would certainly deserve it. But these owners are not the pioneers of the game, taking the league from a rag-tag affair to what it became in the 1970s. These are not Maras, Hunts, Davises, etc., who might be likened to Steve Jobs, Bill Gates, Steve Wozniak. The modern owners are more like Tim Cook or Satya Nadella (the current CEOs of Apple and Microsoft) who do great work but are riding the wave created by the innovators.
Posted by John Turney at 1:26 PM