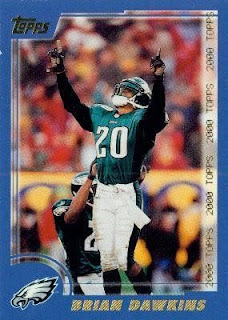 This weekend former Philadelphia Eagle Brian Dawkins will be inducted in the Pro Football Hall of Fame. Have had many discussions over the years concerning what are the responsibilities of a safety, and who has played the position at an elite level. Brian Dawkins is very deserving of enshrinement. The folks at the Pro Football Hall of Fame have been helpful and respectful of my work on the history of the game, and sure like to help them out when I can.

A few days ago I sent them some stat info on Mr. Dawkins. Before 1950 many players caught a touchdown pass and intercepted a pass in the same game. From 1950 through 1956 this accomplishment happened only 15 times. In the last game of the 1956 season for Pittsburgh Jack Butler did it for the 4th and last time in his career.

There were many games played between 1981 and 2002, and sure looked like it would never happen again, yet in the 35-17 win over the Houston Texans on September 29th, 2002 Brian Dawkins became the latest player to join this fraternity. In the second quarter his interception and 27-yard return set up a field goal, and in the 3rd quarter Brian Mitchell tossed to Dawkins for a 57-yard touchdown.

The second subject for today is a personal one, yet feel strongly in sharing the following; over the years has been struggling to convince teams/companies to invest in my historical statistical research. Was told by bitter/angry Bob Carroll years ago that "you will never make a dime selling research". Well, Bob, you were wrong. I hired an agent three years ago, and Mr. Shane Holmes has done yeoman's work in contacting folks and completing deals. The most recent was a mega-deal like no other. My hope is that someday there will be a site the pro football fan can go to and view a complete and accurate box score (like baseball).
Posted by TJ Troup at 8:21 AM