The 1973 NFC Player of the Year—Did John Hadl Deserve It? 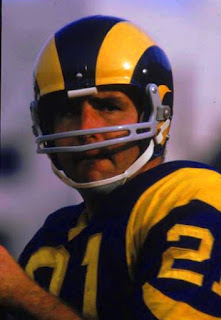 From time to time we like to look back and analyze past award winners and view them through the lens of current sensibilities versus those "back in the day". Things have changed and scrutiny is higher, especially for quarterbacks.

John Hadl was the consensus NFC Player of the year in 1973 winning the UPI, Sporting News, NFLPA, and Kansas City Committee of 101 versions of the award with Fran Tarkenton winning the New York Chapter of the PFWA award.

Hadl's awards make sense based on the Rams 12-2 record and his passing statistics for the season but when you break down his season into halves, it may not be that simple.

In the first six games, Hadl was on fire with a 129.5 passer rating  (the first season it was used as a passing statistic) and had 13 touchdowns compared to just two picks. Then, in week seven he hit a purple wall and only had a few good games in the last eight weeks and some poor ones— 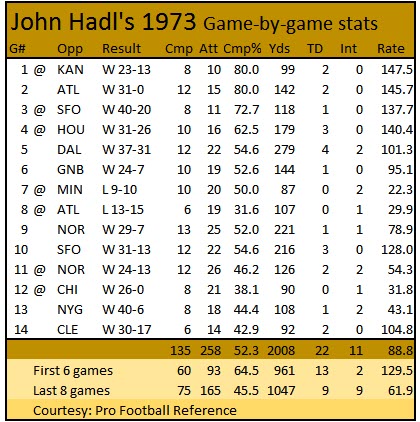 Hadl's slump continued in the playoff game versus Dallas and into 1974 when he was traded to the Packers for a pile of draft picks. Insiders thought there was something wrong with Hadl's arm, he was missing throws he normally made and Rams GM Don Klosterman jumped when he had a chance to unload his ailing quarterback for such a high bounty. It turns out it was not his arm but his lower back that was causing the issues, you know, with the backbone connected to the neck bone and the neck bone connected to the arm bone, it all fits together. Regardless, there were issues.

So, was him having one great half of a season and one poor half of a season the stuff of being a Player of the Year? Maybe then, but if this happened now we think someone else would be chosen.

Roman Gabriel had a fine year but his 5-8-1 record would be a hindrance, even though they were a few plays away from being 7-7. Fran Tarkenton, as mentioned, won the NY PFWA NFC Player of the Year Award for his 12-2 Vikings. Roger Staubach was 10-4 won the passing title and led the NFC in passing touchdowns (tied with Gabriel). All would be fine choices. 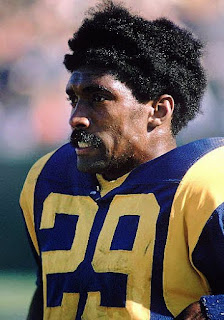 However, we think the best vote would be for Harold Jackson, Hadl's teammate.
Jackson was a big part of Hadl's first half anyway and had another monster day (for the 'dead ball era') in the second half. His 21.9 yards per catch were second in the NFL and his 13 touchdown receptions led the NFL, all for a team that ran the ball almost two-thirds of the time.

Jackson is a player who often gets overlooked, he led the 1970s in receptions, yard receiving, touchdowns and was fifth in yards per catch and didn't get close to being All-Decade. Possibly because he played for three different teams in the 1970s and didn't have huge support from any of the voters because the longest he played for any team was five years.

Regardless, we think he had the best, most-productive, impactful season of any NFC skill player in 1973. He's our pick for this "what if" analysis.
Posted by John Turney at 2:43 PM