A Brief History and Review of NFL's 'Three Techniques' 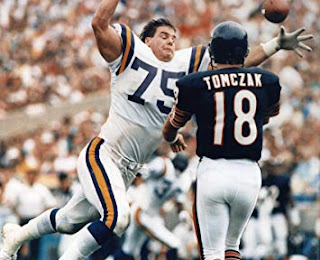 At first, the 'flop' 4-3 defense did not catch on in the NFL. One of the first teams to use it (maybe the first) was the early 1970s Giants but they had a good middle guard (John Mendenall) but could never find the good rush tackle to match with him.
The next team to use it, and they did it for just one year, was the 1976 Tampa Bay Buccaneers. And a key feature of the flop 4-3 is that the defensive tackles switch sides depending on the line call, and one of the defensive tackles is a nose tackle and the other is always a three-technique. Selmon also played plenty of end that year and would switch sides. It's hard to get lots of film to break down the percentages of where he played but what we've seen shoes that, really, until he got hurt, the Bucs three-technique was often Lee Roy Selmon who became a Hall of Famer as a 3-4 defensive end.
After that, we saw the Packers use a nose and 3-tech in 1977 (Dave Pureifory at nose and Dave Roller as the 3-tech but they didn't do it all the time, it seemed to change depending on the opponent) and then Carl Barzilauskas as a 3-technique and Roller as the nose in 1978 and 1979 though we saw some games where they went string left- and right tackles. We also so Terry Jones and others as nose tackle in 1979. For time immemorial the 4-3 defensive tackles had been left and right. They always stayed on the same side and when the coach wanted to make a call, such as an overshift or and undershift, the tackles slid into position, meaning both would, at times, play over or near the center and over the guard. With the flop 4-3 they would change sides to achieve the same affect.

There are more than one of the technique alignment charts, with different numbers of the outside techniques, but this is the classic one. There is one that makes small changes and one that has consecutive numbering over the tight end. Also, rather than "1" sometimes the shade techniques over the center are called 0+and 0- meaning zero strong and zero weak.

So, after the experiment with the Bucs the flop 4-3 and the Packers in the late-1970s the flopping of tackled didn't appear in the NFL again (in earnest anyway) until 1986 when the Vikings began to use it when they moved from a 3-4 to a 4-3 to free up Keith Millard and to get Chris Doleman on the field full time. Later, after Millard blew out a knee and was traded John Randle took that spot and held it for over a decade. Millard was the consensus NFL Defensive Player of the Year in 1989 when he had 18 sacks (still the unofficial record for three-techniques) and 11 run/pass stuffs.

Randles numbers were ridiculous in terms of pass rush with 137.5 sacks in his career, but only 44 run/pass stuffs. Nonetheless, he was a six-time All-Pro and went to seven Pro Bowls en route to the Hall of Fame. 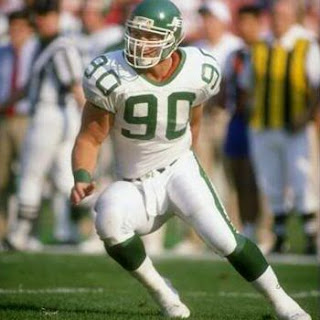 In 1990 the Jets employed the flop scheme. In 1989 they were a 3-4 team that was struggling to put pressure on the quarterback. Pete Carroll was the defensive backs coach with the Vikings when they went to the flop was the Jets defensive coordinator in 1990. He put Dennis Byrd into what he called the "Eagle" tackle, which is just different nomenclature for the 3-technique, and it paid dividends, with Byrd recording 20 sacks over the next two years. Sadly it ended with a tragic injury to Byrd in 1992.

The Buccaneers used the flop 4-3 in 1976 and switched to a 3-4 in 1977 and played that through 1990. In 1991 Floyd Peters, who implemented the flop in Minnesota in 1986, was the Bucs defensive coordinator and installed the flop there. In 1992 the Bucs drafted Santana Dotson to fill the 3-technique spot and he held it until he was shipped to the Packers and the Bucs drafted Warren Sapp. Peters was there through 1994 and in 1996, in Sapp's second year Monte Kiffin (another Viking alum who was with Peters and Carroll in 1986) was hired and the Tampa-2 defense was perfected. They coverage was the specific Cover-2 that Bud Carson used to call Cover-22 but the front—the defensive line was still the same flop that Peters installed in 1991 and Sapp thrived. 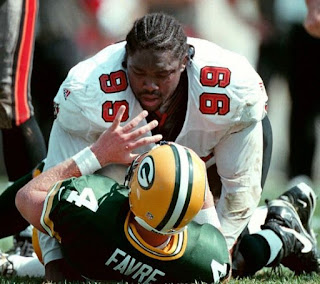 Sapp, of course, ended with close to 100 sacks and was voted to the Hall of Fame and is often considered the prototype for the three-technique. We think he was sometimes too heavy and could have been even more productive in run defense, but really, it wasn't his job. He was supposed to get up the field and create problems for the offense and he did that very well.

In the early 1990s the flop was catching on with coaches other than the Vikings, though some still did. In 1995 Willie Shaw installed his "Jet" scheme which was a flop 4-3 but he emphasized that all plays were passing plays, i.e. the "jet" technique was used, which mean they rushed the passer first and played the run on reactions and athleticism. Calling it the "Jet" scheme was good PR but it was no different than what the other flops schemes were doing or for that matter, it wasn't different than what Deacon Jones and Merlin Olsen did in the George Allen schemes of the 1960s. 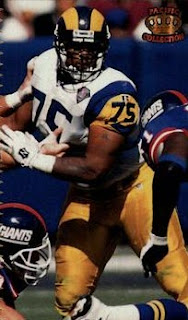 The scheme proliferated to New Orleans, Atlanta, and through Lovie Smith to Chicago, and elsewhere. La'Roi Glover and Rod Coleman, and Tommie Harris were the stars in those locales. Glover even led the NFL in sacks in 2000 with 17 (though we think Sapp did with 16.5 but that is another story). Coleman had 22 sacks over a two-year period in 2004-05 and Harris was a three-time Pro Bowler for the Bears from 2005-07. 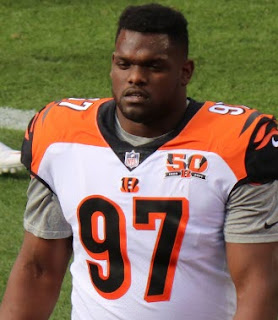 These days it is a golden age of the three-technique though not all of the players are in flop 4-3 schemes. Geno Atkins, now beginning his ninth season, is and has been a Pro Bowler every year since 2011 with the exception of 2013 when he had a knee injury. He's totaled 61 sacks in his eight seasons and is a three-time All-Pro. 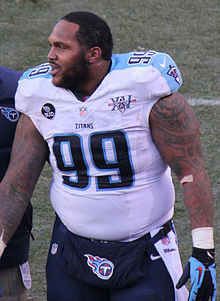 Jurrell Casey began in a flop 4-3 but the last few years he's been in a hybrid 3-4 where one "end" is reduced or "sunk" to three-technique. That occurs with Wade Phillips's scheme with the Rams, Aaron Donald is a three-technique who was almost always on the weak side. In that scheme the WILL backer and MO backer also are always away from the tight end/strong side, flopping three positions rather than one.

Casey had 10.5 sacks in 2013 in the 4-3 and while still being a difference-maker has not had that kind of production since they went to the hybrid 3-4. In our view he gets moved around too much, sometimes standing up as a defensive end or in the A-gaps as a linebacker. Obviously, the coaches know more than we do, but it's just a bit too gimmicky. Line him up over the guard like the Rams do with Donald and Casey will get you double-digits sacks and stuffs is our view. 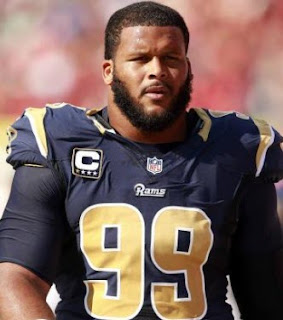 Donald is more productive year-in and year-out than any three-technique. So far he's averaged 9.8 sacks a year and 10.4 run stuffs and has been All-Pro three times and was the AP Defensive Player of the Year in 2017. The only concern is when he's going to show up to play for the Rams in 2018. He's holding out for the second straight year and though it is thought he will be in sometime soon, the longer goes means the possibility of missing games like he did in 2017. 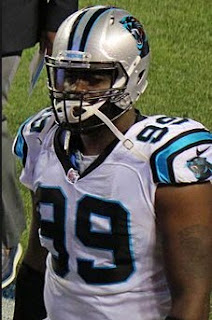 Kawann Short and Gerald McCoy have been in the more traditional flop 4-3 schemes and also have been Pro Bowl quality. They get overshadowed a bit because of the emergence of Donald and the constant presence of Atkins but both are fine players. Short got post-season honors in 2015 when he had 11 sacks and 7.5 stuffs and McCoy is a six-time Pro Bowler. 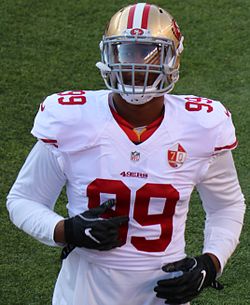 On the horizon, the 49ers have DeForest Buckner and the Cowboys were thought to have a future star in David Irving but that is on indefinite hold due to being suspended four games for violating the league's substance abuse policy. He is eligible to return Week 5 but by not reporting to the camp, that is in question. Irving had 7 sacks in eight games through the middle of the 2017 season but his recent Instagram message: “Every game you seen me play in, I was medicated” does not help matters. 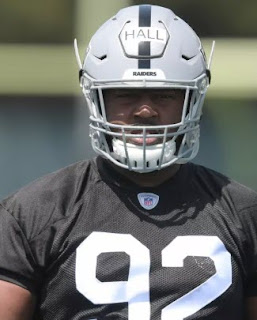 Buckner has a bright future and has already played very well. We look forward to seeing if he can reach the upper-echelon this season. Grady Jarrett played very well in 2017 and seems to be getting better he needs to up his production but he seems to have the right stuff.

The Colts now have Denico Autry and look like they plan to play him as a three-tech. We will see but he's shown some skills with the Raiders as 'wave rusher' and with Colts as a starter maybe he can be a double-digit sack guy in their new rusher-friendly scheme.

Seahawks people we talk to say that Jarran Reed has the talent to be one of the "next ones" if you will. We have seen him flash pressure, but to be a star he needs to get to the QB and take him down. Pressures are great, no doubt, but if he loses his 'warning track power' (hurries) and turns it into 'home run power' he could be a star, too. He's quick and agile for his size, he just needs to close on the QB more.

One rookie we are watching is P.J. Hall of the Raiders. He stood out the first two preseason games and leveled off in the third, but we expect him to be the starting three-technique sooner rather than later. He had violent hands and lots of hustle. It's early, but he's one to keep an eye on. If he plays in the regular season like he has in preseason he will definitely be on the All-Rookie teams.

In this look back we've hit the highlights, there are some good players over the past 30 years we've omitted but we're confident these are the one that stand out in this specialized position of "3-tech". So, who will the best "Eagle" tackle in the NFL in 2018? It's a good bet he will wear number 99 but it's no guarantee.
Posted by John Turney at 6:02 PM