Larry Who? Larry Brooks, That's Who 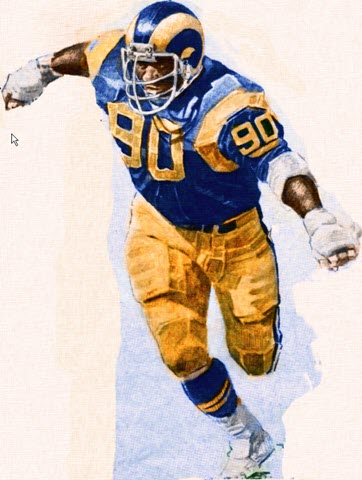 Sometimes a player has a career that may not end with accolades like the Hall of Fame or even the Hall of Very Good but when it is reflected on it may be a result of poor timing or being on the wrong team.

Such may be the case for Larry Brooks. He was part of a very successful defense that didn't win a Super Bowl and he had teammates like Merlin Olsen (Hall of Famer), Jack Youngblood (Hall of Famer), Fred Dryer, Hacksaw Reynolds that had lots of star power. 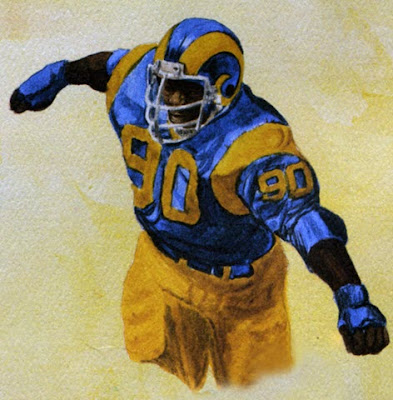 That's a 1st-2nd-1st-2nd-1st-3rd-2nd-and 5th ranking in eight of the most important defensive categories. Extremely well, indeed, especially considering the competition in the NFL that was composed of the Steel Curtain, Doomsday II Defense, the Purple People Eaters, the Orange Crush and other fine defenses like the Raiders and Dolphins.

Sure, all that success was a team effort, but Brooks deserves his share of the credit, too, along with the Youngbloods, Olsen, Dryer, Reynolds, etc., because in that same ten-year period Brooks, per 16 games, he averaged 7½ stuffs, 9 sacks, and 80 tackles.

Those are fine numbers for a defensive tackle for a single season—one that would make him an All-Pro or Pro Bowler, and much more so to average that over a decade.

Here are his complete career statistics.

He led the Rams defensive linemen in tackles every year from 1973 through 1980, with the exception of 1975 when he injured a knee at mid-season.

Brooks also has a couple of excellent "testimonials". One from John Hannah and another from Gene Upshaw. Upshaw said to the Los Angeles Times that Brooks was "the best defensive tackle I face'.

In 1974 Brooks made 8 solo tackles and had two sacks in the Week 3 matchup between the Rams and Patriots. In 1980 they met again and Hannah told Sports Illustrated's Paul Zimmerman only, "Last year I had a rough one against Larry Brooks of the Rams". But here are some still shots of a couple of plays where Brooks and Hannah were matched up. Both ended up with Hannah on his rear end.


"We howled when we saw those plays on film" said Jack Youngblood, referring to the plays both above and below. "Mickey, our film guy, put it and some others on a loop and we'd watch that over and over". "The thing is", added Youngblood, "is Brooksie did that to a lot of guys".

Here is the end zone view of the same play: 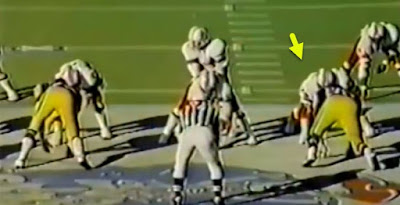 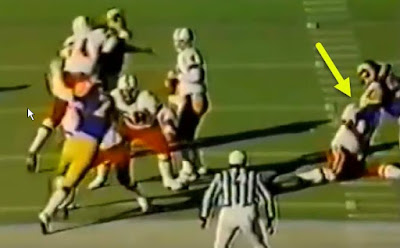 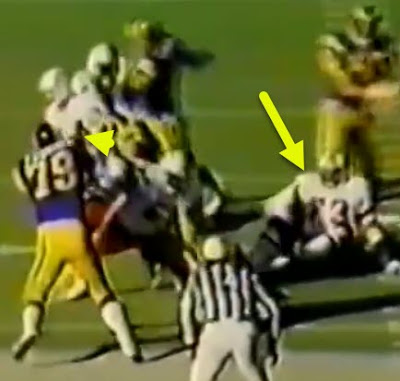 Here is another play from the same game:

Youngblood added that Brooks was the best he's ever seen at the "butt technique", a "three-point landing—hands on shoulder pads and facemask to facemask". "Larry would just stun the guard" with that three-point landing and he was not tall, maybe 6-3 but built very low, a low center of gavity, and it just stopped all the momentum of the guard. Brooks when then shed the guard by pulling or "jerking" him back and Brooks was free to make tackles.

It was also fascinating to watch Brooks run through the "trash" in pursuit. It was a day and age when offensive linemen would cut people and it left lots of bodies on the ground. Brooks could smoothly go through that trash when the play was away from him. It's part of the reason he made so many tackles—backside pursuits. 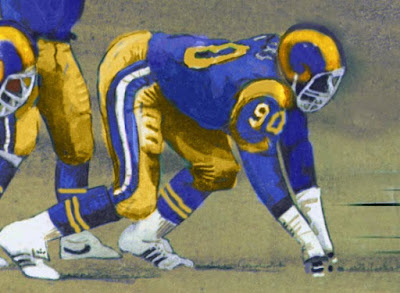 Brooks could rush the passer as well. He'd benefit from having two ends like Youngblood and Dryer on the edges and the quarterback having to step up a lot, but he could club, rip, and swim with the best of them.

In 1978 in a fine article in the Los Angeles Times by Ted Green, Brooks mentioned he understood his plight in not getting tons and tons of recognition. But he played for another reason: 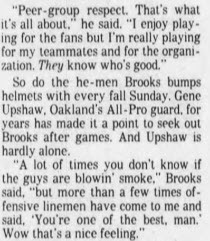 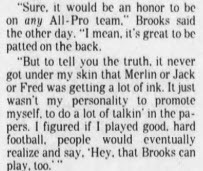 From 1972-76, especially from 1973-76 Merlin Olsen was the "cop" of the line, he was the mentor to young players and as it was taught back then, three guys are cut loose and someone has to play along the line and watch for pass actions runs—draws, traps and screens (which is really a run play) and Olsen, though still a Pro Bowl player took on that role. This allowed Brooks to get up the field and if run showed, he'd convert to that three-point butt technique and squash the run and if it was a pass he was free to get there, knowing Olsen had his back.


In 1982 the knee injuries returned and they effectively ended his career. Really, the knee troubles that began in 1975 never left. It was a nagging thing from 1976-80 and in 1981 he hurt it again and in 1982 the third major knee injury felled him.

Is it a Hall of Fame career? Likely not. He's in a big group of excellent defensive tackles who were All-Pro a couple of times and went to maybe a handful of Pro Bowls and there is quite a logjam. You read about the push for Joe Klecko a lot, and he's a worthy player but as can be seen, Brooks's numbers are very similar. 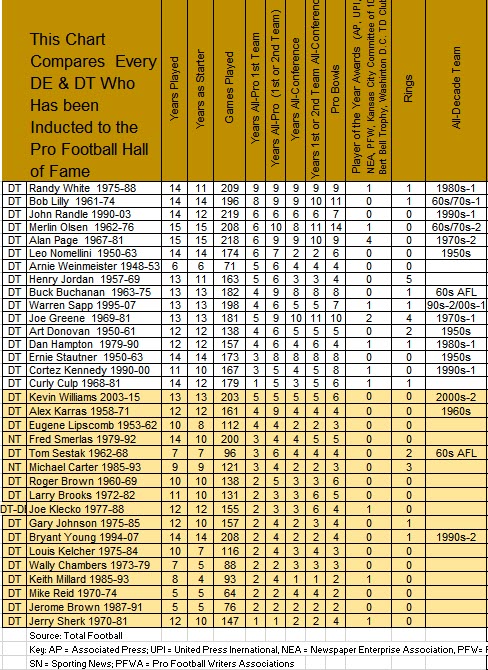 So, sometimes maybe being respected by your peers is enough. Maybe that will have to be the Larry Brooks legacy.
Posted by John Turney at 8:22 PM