The Ways and Means of a Defensive Line Coach
John Turney


Mike Waufle never meant to be a football coach, he wanted to be a New York State Trooper. Well, life has twists and turns much like a defensive linemen's route to the quarterback.

The Western New Yorker enlisted in the United States Marine Corps and served for four years starting in 1972. From there he played football at Bakersfield Junior College, and was part of a team that won the JC National Title in 1976. From that he earned a trip to Logan, he played defensive line at Utah State and was a team captain there, doing his best to uphold the tradition of the great defensive line legacy created by All-Americans Merlin and Phil Olsen.

Instead of going through the process of being a peace officer an  arose for Waufle to begin a coaching career at Alfred University in his  of New York where he caught the coaching bug. Then, for five years he was an assistant at Utah State, moving on to Fresno State from 1985-88. He had a one-year stint at UCLA and then two years at Oregon State before settling at the University of California at Berkeley in 1992 for six years where  developed two All-Americans — Duane Clemons and Regan Upshaw  and his success the eye of Raiders coach Jon Gruden, whole hired Waufle to be the Raiders defensive line coach and got Waufle his start in the National Football League.

From the beginning his linemen did the things expected of defensive linemen — stop the run and rush the passer, i.e. down players. One measure coaches look at is "splash plays" though it's not the only one. Much has been written than a good pass rush does not   sack, which is true, and that sacks are not the only measure of a pass rusher. , in the coaching world of college and the NFL coaches want and teach players to make splash plays because they turn games, forces fumbles and interceptions.

In this way, pupils have shown well since his entry to the NFL in 1998. Darrell Russell had one who had all the skills and was often in the . Russell Maryland was a Raider in the late 1990s and was often getting "stuffs" which is a term coined  Stats, LLC for tackling a running back in the backfield. Sacks, as is now common   the  for a loss and the term a popularized by Deacon Jones. But there was the typical cast of Raider Characters who made a lot of plays in the backfield, sacks and stuffs or "stacks?" Combining them together, a term coined by me right now. 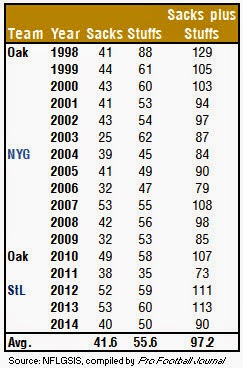 After Oakland came the New York Giants and the  to coach Michael Strahan and ended up yielding Waufle a Super Bowl ring in 2007. son Strong-side linebacker Mathias Kiwanuka, a defensive end by trade, would play defensive tackle along with  defensive tackle Justin Tuck (also a defensive end by trade) with Strahan and Osi Umenyiora the other end a 4-DE set.  broke a leg late in the season and his role was filled by players like Barry Cofield and Jay Alford and they unsettled Tom Brady to the point the helped the high-flying 2007 Patriot offense to 14 points and won the Super Bowl. That season the Giants defense has 108 stuffs plus sacks (stacks),

After a two-year return to Oakland, in 2012 Jeff Fisher hired Waufle to coach his defensive line in St. Louis. And he's done exceptionally well in comparison to the league. In 2013 his Rams had 113 stacks (the second most by a -coached line) and since his arrival, no team has had more sacks plus stuffs.
2014 will bring challenges, if Aaron Donald can avoid a sophomore slump, if Chris Long can fully recover from his ankle injury, can Robert Quinn have another explosive year like he did in 2013, Nick Fairly replace a solid player who contributed to the "stacks" on the Rams for the last three years?

Will the Gregg Williams preference for using 3- lines on  and dime, keep the numbers like they were in 2014 ore will the increase to the 2012-2013 levels. Will Ethan Westbrook work into the player his talent suggests he can? All these are the question all coaches like Mike Waufle have to answer to their fans. But with the talent the Rams possess it's possible Waufle could have his line set a personal best in in 2014.