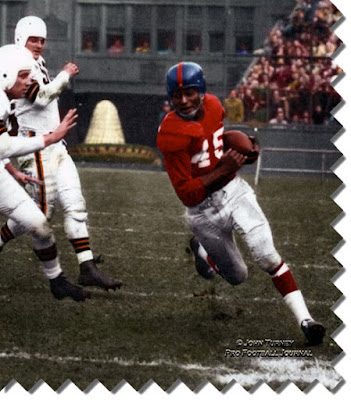 Though there have never been any Greek Goddess's patrolling an NFL secondary trying to intercept passes, there have been men who victimized certain teams at an impressive level of interceptions.

The following is the list of men who intercepted at least 10 passes against a specific opponent. Emlen Tunnell tops our list, and since his last interception against Washington came in 1959 no doubt he will remain there forever. A strong statement?

The percentage of interceptions league wide has dropped dramatically in the last fifty-seven years; thus Tunnell will probably stand alone forever. There are men on the list who are Hall of Famers, and men who just happened to play their best against a specific team.

Bobby Dan Dillon of the Packers is the only man on the list who proved to be a "nemesis" against three different teams. Championship teammates are also on the list; such as Yale Lary & Jack Christiansen of the Lions. For many teams though there is just one man who"Pilfered the pigskin" to make the list.

I have been honored/fortunate to have received letters over the years by former defensive backs who answered my many questions concerning coverages, opposing receivers, and teams they played against. The best remains the long letter from former Jet Billy Baird. He detailed playing against the Patriots and his success against them.

A perusal of the list definitely shows that only two recently retired players made the list twice. Rod Woodson is a deserving member of the Hall of Fame, and will be joined (possibly on the first ballot) by safety Ed Reed very soon. Reed not only intercepted against Cleveland and Cincinnati he returned the ball over 300 yards against both—no one will ever achieve that kind of return yardage again. There are men on the list that should be considered for the Hall of Fame, and not just because they were a "nemesis" to a particular team, yet if some of you take the time to respond; would enjoy hearing about men on the list you feel have been overlooked. 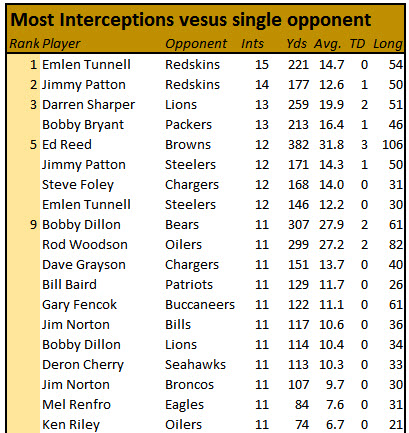 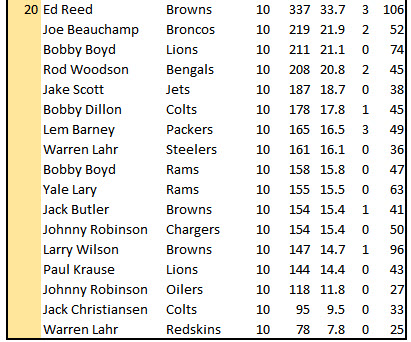