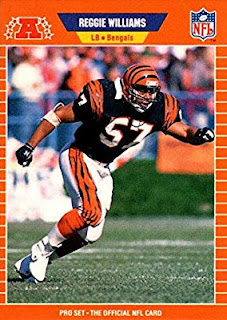 We've recently featured some NFL linebackers who didn't get a lot of Pro Bowl invitations (if any) yeat were very good at their job over a long period of time.

Reggie Williams was a fine player, a team leader an all-around good guy from 1976-89 for the Bengals. He was All-Rookie in 1976 and was the NFL Man of the Year in 1986 but nothing else.

He was able to play well at right outside linebacker in both a 4-3 and a 3-4 scheme and was a fine pass rusher, could cover and was a solid tackler along the way.

In 1981 Williams intercepted 4 passes and had 11 sacks, (though unofficial). Sacks became official in 1982 and for players with four or more interceptions in a season the highest sack total for any of them is nine. So, it was a special season that showed he could get picks in coverage and

He played in both Bengals Super Bowl visits and was part of the NFL's top defense in 1983. 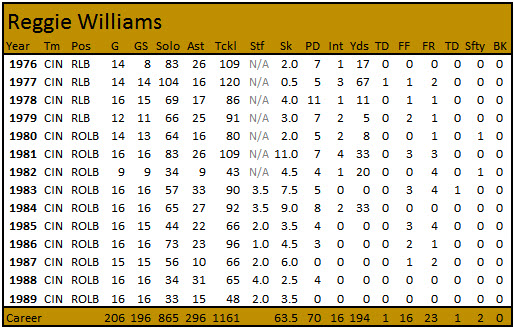