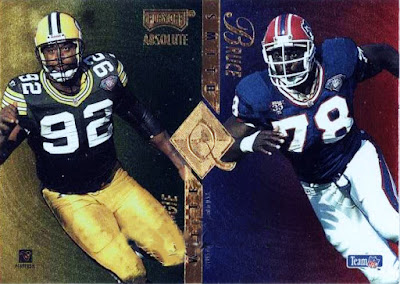 Not every look at past awards will have perfect 20/20 vision if you will. However, sometimes it is useful to look back and who got votes in a category (All-Pro, MVP, or Player of the Year) and see who was recognized in multiple years and what the total votes were.

The caveat here is when Bryce Paup won the AP Defensive Player of the Year in 1995 there were 86 votes cast. Now, there are only 50 voters. Thus, that accounts for his total. 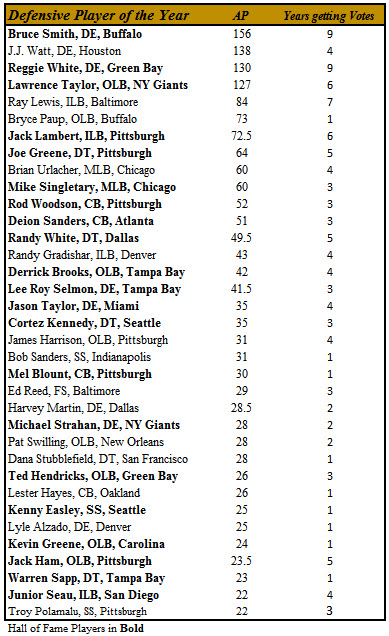 J.J. Watt has a good shot at becoming the top vote-getter since the Award's inception in 1972. Ray Lewis received votes in seven different seasons, winning it twice. Both he and Brian Urlacher are up for the Hall of Fame this upcoming February and it's a lock that Lewis gets elected, Urlacher may have to wait a year.

Sandwiched between the likes of Deion Sanders and Randy White above him and Derrick Brooks, Lee Roy Selmon and Jason Taylor below him is Randy Gradishar who won the award in 1978 and was a second runner-up in 1977. Now that Ken Easley is in the Hall of Fame the short career "ding" cannot be used on Gradishar who, like, Easley was a Defensive MVP but was All-Pro and a Pro Bowler more often than Easley.

There has been reports in the media that Robert Brazile has been closely considered by the Hall of Fame Senior Committee and he's a fine candidate. He and Gradishar have the same number of First-team All-Pro selections (5) and the same number of Pro Bowls (7) but Brazile only garnered 5.5 AP Defensive Player of the Year votes, 38 fewer than Gradishar. Additionally, Gradishar's Orange Crush defense ranked higher than the Oilers defenses of those mid-1970s to mid-1980s. Brazile, if elected would be the third player from that Oiler defense (Elvin Bethea and Curley Culp) to none for the Orange Crush.

Dana Stubblefield , or as John Madden called him "Stubbafield", was like Paup, a one-year career year type season that got him the AP DPOY award.

Three linebackers, Ted Hendricks, Jack Ham and Junior Seau all got between 22 and 28 votes but they were spread out over several seasons. Seau, though often listed as an inside linebacker wasn't. He was a 4-3 outside linebacker in a stacked position for his career with the Chargers. In some ways it looked like a 5-2 defense with Seau as an ILBer but that is because most of the time the SAM backer was aligned over the tight end on the line of scrimmage.