Cam Heyward—Aware of His Place in History 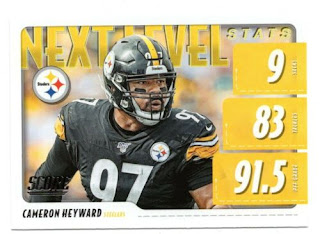 A couple times this camp Steelers defensive lineman Cam Heyward has commented on lists published in the media that rank NFL players. One of those times was in July when ESPN posted its list of top players including defensive interior linemen. Hayward was ranked fifth. On his Twitter account, Hayward responded "I respect my peers but this list ain’t right".
A month later Heyward to Steelers Wire, "I work too hard to not be No. 1."It’s as simple as that." In 2021 he told FanNation this, "If I can be honest, there are a lot of other players who are really good at my position, but I don't see any reason why they're better than me. That's just me being honest. I feel like I put in the work and I try to be the best d-lineman in the league".
Clearly, Heyward wants his respect.
Early in the 2017 season, we compiled a list of who we thought were top 3-4 defensive ends in history. At that time Heyward was not even considered. After all, through the 2016 season, he averaged just 36 tackles and four sacks, and 9 QB hits per season and only started 52 of the 87 games he played.
Since then, 2017-21, he turned it around and became a dominant player—Averaging 65 tackles, 8½ sacks and 20 quarterback hits a season. Additionally, he was All-Pro three times and went to the Pro Bowl every year. Now he would likely be in our top ten of 3-4 defensive ends.
Of course, these days Heyward plays defensive tackle or defensive interior more than anything since teams play far less base defense than ever and the Steelers are no exception. In previous generations, the 3-4 defensive ends would play either head-up or a slight outside shade on a tackle then on likely passing downs play three-technique. This was true of Howie Long, Richard Seymour, JJ Watt, and other 3-4 greats.
Heyward does the same it's just that he's a three-technique the majority of the time and only plays on a tackle when the offense runs 21 or 12 personnel.
The question now is what his legacy will be. Were he to retire now would he make the Hall of Fame?
Hard to tell. The short answer is probably he will. But it is no lock. Not yet, anyway.
He would be compared to someone like Richard Seymour, himself a three-time All-Pro but went to seven Pro Bowls and owns three Super Bowl rings and Heyward is slightly shy on those fronts. Not far behind—but a little behind.
It may be, that to solidify his place in Canton, Heyward may need to stay are his current level for at least of couple more years doing what he does—disrupting opponents running games and putting inside pressure on quarterbacks.
It's not expected that Heyward or interior players rack up a lot of sacks, though he does get his share—it is his hurries, pressures, or whatever the preferred term is, that a player like Heyward is judged by. And no matter what the numbers in those categories are the "eye test" clearly reveals that Cam is dominant in that category, he gets good pressure consistently.
Heyward is going into his twelfth season and is certainly a top-five interior player and though he got an ankle injury in camp he says it will be "fine" and shouldn't affect his season. If so, he should be in the running to again be All-Pro and a Pro Bowler, often the major measurement for linemen when being considered for the Hall of Fame.

But there will be competition for those All-Pro slots. Aaron Donald has locked down one of the defensive tackle/defensive interior slots for the last seven years. The Titans Jeffery Simmons is coming on strong and will vie for All-Pro, for example, and of course, there are others.
Cam may have done enough to get a Gold Jacket but a few more dominant years will make it a sure thing in our view.
Posted by John Turney at 1:56 PM