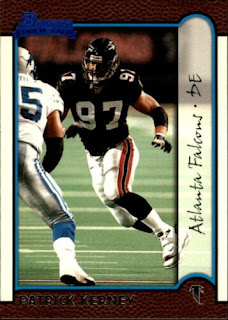 After two seasons the Atlanta Falcons must have been worried. Their number one pick from the 1999 draft was not producing. He was approaching "bust" territory.
The pick was Patrick Kerney.
In his two seasons, (1999 and 2000) despite playing all 32 games and starting 18 he totaled just 5.0 sacks.
He had the measurables—6-5, 275 or so pounds, ran a 4.72 forty at the 1999 NFL Combine, and he did well in all the drills. he had good collegiate film, recording 24 sacks at the University of Virginia where he was All-American by the Football Writer's Association and Second-team All-American by the Associated Press. He was a smart, driven player.
He was seemingly a "can't miss" NFL prospect.
There was a little more to the story. In an interview early in 2001, Kearney said, "I was disappointed in how many sacks I missed (in 2000). I was back there and the quarterback slipped out of my hands. There were at least probably five sacks that I should have had."
That kind of mitigates his second season, in a way. He felt he was getting pressure. In his rookie season, he was not a starter and got limited reps so that explains his 2.5 sacks as a rookie.
What about his second season when he was a starter and totaled just 2.5 sacks? It was mentioned in the media, especially in the 2001 preseason. In an Associated Press article, it stated, "Atlanta has no sacks for its defensive ends, a problem that carries over from last year when starters Brady Smith and Patrick Kerney combined for just seven all season."
In 2001, finally, Kerney got off the schneid. He had 11 sacks in the first 11 games and finished the season with a dozen. He finally lived up to his draft status.
From 2001-06 he averaged 9 sacks a year for the Falcons with a career-high of 13.0 in 2004 and was rewarded with being voted to the Pro Bowl and was voted Second-team All-Pro by the AP.
Kerney had proven himself and in early 2007 he chose to void the last two years of his contract (which was his option) to show his wares to other NFL teams. he settled for the Seahawks who gave him a six-year $39.5 million deal ($19.5 million guaranteed). Apparently, coach Mike Holmgren liked was he'd seen in Kerney.
The first season with the Seahawks Kerney gave the Seahawks his career year—he totaled 63 tackles, 14.5 sacks, and forced five fumbles and was voted to his second Pro Bowl and was a consensus First-team All-Pro He was also distant second in the Defensive Player of the Year voting to Bob Sanders. No, it wasn't close but at least four writers thought he was the best defensive player in the NFL. 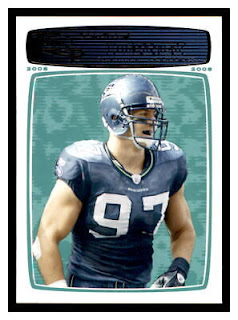 The success in Seattle was short-lived though. The year after his dominant season he severely hurt his shoulder and his season ended after seven games. In 2009 he was merely average and was also nicked. He'd hurt his elbow among other things.
He said to the media at midseason that "(H)is body reminded him daily that he was in his 11th season." Kerney also said he was concerned about his 'head" in response to an NFL study conducted at the University of Michigan. "We are in twenty car wrecks a year. It's a violent sport. Everything has its risk and rewards. It's awful what happens to guys, you just hope it does not happen to you."
The following April Kerney retired from football at age 33 reporting that his body had taken a toll to the degree that he could not train properly and without it, he could not perform at a "level acceptable to him."
Kerney finished his career with 82.5 sacks and 19 forced fumbles. No, he wasn't an all-time great but he had a solid career and is worth remembering.
Career stats— 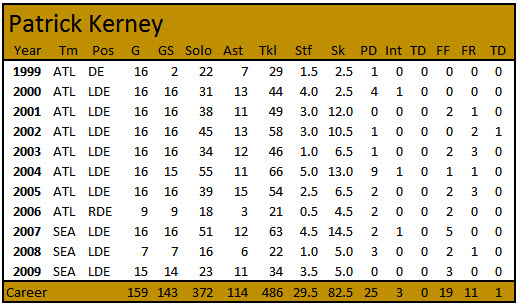