Charlie Sumner: His Place in the Rise of the 3-4 Defense in the NFL


In the NFL, even with much film available to re-check the written words of the historical record it is hard to know, for sure, who is responsible for any given scheme or player package or other nuanced changes in the game. Often, a new idea will spread in a matter of weeks after years of maybe
used once-in-a-while, as a change-up.

One such scheme is the 3-4 or often called "Okie" defense in the early 1970s. In the late-1950s  Bears and Colts and other teams used it on rare occasion, maybe in long-yardage or late in a game as a prevent. In the mid-1960s, in the AFL, Joel Collier used is as at least a part-time base defense with the Buffalo Bills. Bum Phillips liked it and used it some with the 1969 and 1970 San Diego Chargers.

The Miami's famed "53 defense", which was a 3-4 defense that was very prevalent in their Dolphins Championship runs in 1972 and 1973, oddly, though, for the Dolphins it wasn't their base defense, it was more of a hybrid , one in which Bob Matheson could either cover or rush. Don Shula often commented that Matheson could cover a short zone as well as many defensive backs and could rush as well as many defensive ends. So, though it was a 3-4, Bill Arnsbarger always spoke of it as their "change up " rather than a 'd employ versus teams tight end and two running backs set.

The year the 3-4 scheme, as a base defense broke out, was 1974 and often it is Bum Phillips' Oilers that were given much of the credit, especially after they traded John Matuszak to the Kansas City Chiefs for defensive tackle Curly Culp, who fit Phillip's ideal middle guard role perfectly.

Prior to the trade, however, the Oilers were not a pure 3-4 teams, using both a 4-man and 3-man lines against . Once Culp arrived, though, the Oilers did little but an Okie front. Other teams used it, the Saints, for it quite a lot so as to almost qualify it as their base.

In 1973, however, New England Patriots team highlights and films show that defensive coach (coordinator) Charlie Sumner was already using the 3-man scheme under freshman NFL coach Chuck Fairbanks. Nineteen seventy-two and 1973 may be the worst back-to-back run defenses in the history of the NFL with the Patriots giving up about 200 yards a game at an average of just over five yards a carry. Clearly, Fairbanks and Sumner had to so something.

They had wanted to switch to the 3-4 in 1973, but were unable to secure a key player they thought they needed to play the defense. Rich "Tombstone" Jackson had just finished an injury-riddled 1972 season with the Cleveland Browns and wanted to get into coaches as he was getting older and had been late (27 years old) in entering the NFL. Fairbanks wanted Jackson to play nose tackle in the 3-4, even though he his career as a defensive end. The thinking was playing inside would not require as much quickness to be effective and that Jackson's off-the-charts strength would make him dominating as a nose tackle. Fairbanks also thought that Julius Adams could play one two-gap (304) end and a youngster out of Oklahoma Ray "Sugar Bear" Hamilton could handle the other. Jackson was to he had a condition–he wanted to coach.

Jackson's collegiate background was in teaching and coaching and was willing to put his body on the line for another season if he got a year of seasoning as the Patriots defensive line coach. Fairbanks turned him down and the Patriots played the 1973 in the 4-3 once again, but at times showed a 3-4, especially against the Bills and Dolphins, teams that ram the ball more often that they passed.

In 1974 Sumner and Fairbanks made the change to a 3-4 base defense in time for week one of the 1974 season. had picked up George Webster to play outside linebacker. Webster had been a three-time All-AFL selection before his knees were hurt, but still had athleticism left and hunger in well for two seasons before injuries finally ended his career after the 1976 season.

In the 1974 NFL Draft, the Pats selected Steve Nelson and Sam Hunt, who ideally filled the inside linebacker positions in the new scheme. , a  against the run, as Nelson, but Nelson could also cover from his inside position as well. Sumner installed stout Mel Lunsford at left defensive end with rock-steady Julius Adams at right defensive end. Additionally, they sent 3rd and 8th round picks to the Chicago Bears for defensive end Tony "Mac the Sack" McGee. McGee would fill the role as a designated pass rusher on third down when opponents went to three wide receivers and the Patriots responded with four defensive linemen and five defensive backs. And fill it he did, averaging around 10 sacks per season from 1974-80.
The Pats responded well that first season, both defensively and offensively and on special teams as they were 6-1 at  with big wins over the Dolphins, Rams, and Vikings. They had a narrow loss to the Bills and later gave the Steelers all they could handle in a late-season game but finished the season 7-7. The Oilers did the opposite, starting the year 1-5 and finishing strong with a 6-2 mark to end season same as the Patriots. But the table was set, both had proven the 3-4 was a viable, every down defense in the NFL and for each of the following several years, teams kept switching to the 3-4, until it hit critical mass in 1985 when 25 of 28 teams were using it (Bears, Cowboys, Redskins were the only three that did not make the switch in that ).

In 1979, Sumner moved to the Raiders as the defensive coordinator, though the Raiders didn't use that title and where he employed a very similar scheme with the Raiders. Though the Raiders had  started their 3-4 in 1976 when injuries along the defensive line caused their switch to the 3-4. And in 1977 they added a new wrinkle as they'd bring in the designated  (Pat Toomay) to play the Tony McGee role and Toomay responded with 14-½ sacks.

Upon Sumner's passing today, the story of Sumner coaching linebacker Jack Squirek to step in for Matt Millen and cover back Joe Washington in Super Bowl XVIII that resulted in a quick pick-six for the Raiders has been making the rounds. But really, it was a fairly typical deployment for that Raider defense at that time, to move pieces around and use them in various places.

The popularization of the 3-4 defense in the NFL from the early 1970s through the present likely falls on several coaches' resumes, as it rightly should, but here is one who hopefully will get his fair share of credit for that fascinating era of transition–Charlie Sumner. 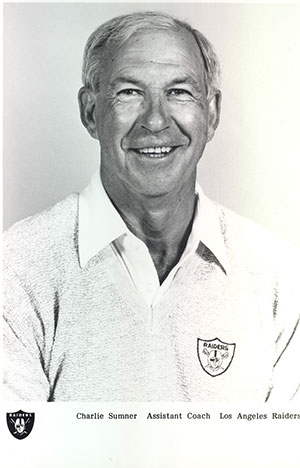