A huge man with a huge reputation passed away. Atkins, a Pro Football Hall of Famer, was 6-8 and 270 pounds and could run and leap with of a smaller man.

Atkins played in eight Pro Bowls and missed a ninth due to injury. In 1968 Atkins was having a monster year in his second season with the New Orleans Saints with 12-½ sacks when he broke his leg. He had been voted to the Pro Bowl for that it was never announced, as injuries are today. Atkins said, "A coach came up to me and said, you were voted to the pro Bowl and they need to know if you are going to play" and Atkins replied "Don't tell them my leg is , it will be well by the time the game comes around and I want the paycheck". The injury was worse than Atkins thought and Ben McGee was announced as one of the Pro Bowl ends and Atkins was never credited with that Pro Bowl. He was, however, a consensus Second-team All-Pro that season.

Little film remains from Atkins' season with the Cleveland Browns, but from what there is you can see Atkins over blockers while playing left defensive end in 1953-54. He was traded to the Chicago Bears in 1955 and remained a Bear through the 1966 season and spent three seasons (1967-69) with the Saints.
Atkins was not a full-time starter right away with the Bears, but by 1957 he was the starting end and began his reign of terror on NFL quarterbacks. That season the Bears threw for 495 yards in losses and Atkins was undoubtedly the leader in sacks with a likely season-high of four sacks in Los Angeles versus the Rams.

With the Saints his totals are 9-½ in 1967, 12-½ in 1968 and 8-½ in 1969, his final season. Sadly, too many missing games will likely never reveal Atkins true sack total, but through our research Webster and I can show 110-½ confirmed sacks, all but a few from 1957 on. Atkins consistency was very notable and part of that he credited to fellow Hall of Fame defensive end Gino Marchetti; said Atkins, "I talked to Gino at a Pro Bowl and was asking him for tips, and the first thing he told me is 'get rid of all that extra equipment'. I had been wearing high top shoes, large pads on my shoulders and in my pants and Gino convinced me to go with less, with less restriction and less for linemen to grab and it really helped my career from that point on".

In a 1996 interview with Merlin Olsen, he told me that if anyone may have challenged Deacon Jones's sack records it would be Atkins, who Olsen and Jones studied film. Olsen was particularly impressed with how Atkins would throw a tackle to the outside and take an inside route to the quarterback. Atkins told me, "Hell, they were throwing themselves, I would take an outside charge and they'd be on their heels and I'd step inside and throw them with their own backward momentum".

Atkins was also famous for the aforementioned leap, where he'd hurdle a blocker in route to the quarterback.
Atkins was highly honored aside from the Pro Bowls, he was a First-team All-Pro in 1960, 61 and 1963. (In addition, he was First-team All-Pro by the New York Daily News in 1958) and was a 6-time Second-team All-Pro. He was also a recognized on several of the 1960s All-Decade teams. 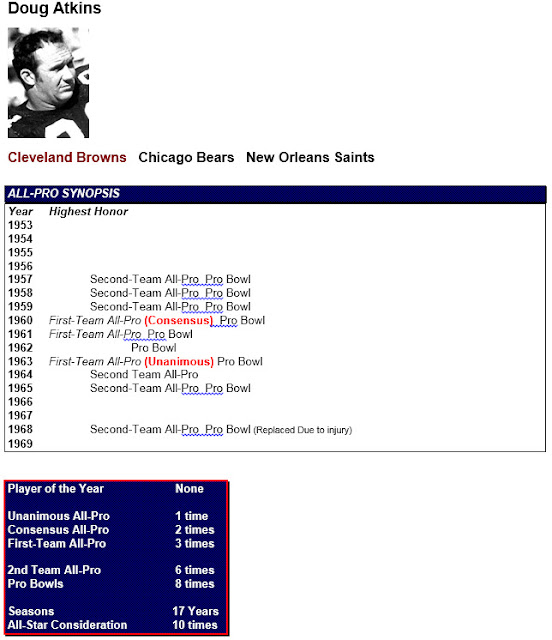