Who Is Top Safety Playing Linebacker?


The Cardinals version is Deone Bucanon. He plays inside linebacker, but is listed in the Cardinals depth chart as a "". It certainly is not one of the positions that Amos Alonzo Stagg invented or what perhaps Paul Brown re-invented.


The Rams counter to that is the "Weak" or "Will Safety" that Mark Barron plays. Though he is a base outside linebacker  where he lines up, he prefers not to be called a linebacker. 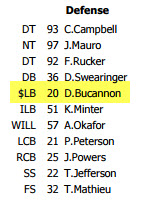 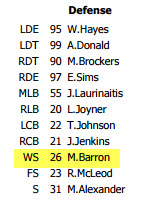 Regardless of nomenclature, both excellent seasons worthy of notice and Buchanan punctuated his season with a pick six on Sunday Night Football last night versus the Eagles.

Aside from the obvious versatility, what is impressive is how many "splash" plays, as coaches sometimes call them this pair has amassed. Both will finish the season with over 100 total tackles, both have forced a pair of fumbles, but also, both have made a lot of tackles behind the line of Barron has 16 /pass stuffs, run or pass plays that have resulted in a loss (which leads the NFL) and has 10.5 which is currently eighth in the NFL. Additionally, Barron has 10 QB hits/hurries and has four.

It may be unlikely that either of these players will be named All-Pro or make the Pro Bowl but both are deserving of serious consideration. And for whatever it is worth, both players are listed as "strong safety" in their bios that appear on the various websites such as NFL.com, et al. Maybe next year or will safety will be in the NFL lexicon. Well, maybe not.